Mailbag: What are the best-worst case outcomes for the Eagles-Colts conditional 2022 draft pick? 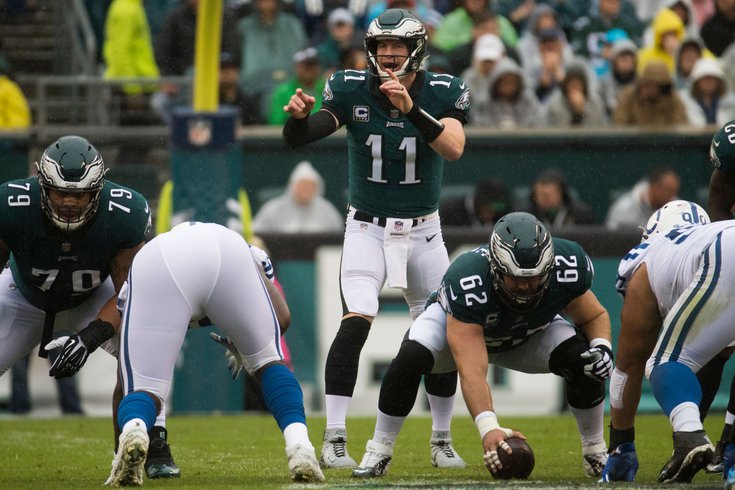 The Eagles need Carson Wentz to be better for the Colts in 2021 than he was for the Eagles in 2020. But not too good.

Question from greenwithenvy: So we need to hope that Carson Wentz stays healthy, plays reasonably well, and the Colts lose a lot of close games?

If he plays reasonably well, they’re going to win a lot of games, because they have a good roster around him. In that scenario, they’d get a pick in the 20’s. I think that would be fine.

I think the best case scenario is if he’s not good, but also not so egregiously bad that he’d get benched in favor of Jacob Eason or Jacoby Brissett or whoever their No. 2 is.

In theory, the Colts could have a bad season, and still be contenders into December, fall apart late, and end up with something like, ohhh, saaayyy, a 6-10 record. For example, look at the NFC East last year. The Eagles weren’t eliminated until they lost in Week 16, and they’re picking sixth, as you’re well aware.

The worst scenario is if Wentz gets hurt around Week 10 or 11 or something, and the Colts go to the playoffs anyway. In that case the pick is going to be in the 50’s or 60’s, which would be a disaster.

Question from HowieTheWorm: If a team offered you a 2nd for Hurts, do you trade him?

If the Eagles struck a deal for Hurts, as in right now, they would literally not have a quarterback on their roster, at all. Even if you intend on taking a quarterback at pick No. 6, you have to at least have Hurts on the roster to create the perception that you would consider taking something other than a quarterback. So no, a 2 would not be enough for me to create that major disadvantage on draft day.

Question from Kephas: Seems like a reasonable path forward would be, if they like one of the top QBs, to draft a QB at No. 6 and let him sit behind Hurts for a year. The following year, the new QB can start and the Eagles can trade Hurts. A lot of theoretical there, but thoughts?

A lot of theoretical there indeed, ha. I don’t think you plan for that sequence, necessarily. I think that if you draft a quarterback at No. 6 overall, the hope is that he’s just a lot better than what we saw from Hurts in 2020, and he plays as a rookie.

But the overall point is valid. If you draft a quarterback at sixth overall, at some point, whether sooner or later, you would look to flip Hurts for a another asset.

Question from gobirds: What to do with Brandon Graham?

A few asked about the possibility of trading Graham, after he was omitted from my "who's getting traded next" post on Friday.

To begin, the Eagles would only save $716K if they dealt him, and he would count for $17,212,000 in dead money on the 2021 cap. But also, off the field, he has unlimited energy and positivity, and is a player that you just want to have around if you're a head coach in the NFL. His veteran presence could be particularly useful to unestablished guys like Nick Sirianni and Jonathan Gannon. I think Graham is worth keeping around.

Question from Mike: What are your thoughts on Genard Avery's move to linebacker?

Yeah, in case you missed that, it was revealed on Friday that Avery will be making a positional change.

The BEST News I heard all week! The Philadelphia Eagles are moving @AveryGenard to Linebacker this season. My dog should’ve been playing LB in the 1st place. Anyhow, proper preparation been on GO for Genard. #BirdGang🦅 pic.twitter.com/xJnICVxHZo

It's overdue! We did a breakdown of Avery's game last offseason, and I came to the conclusion that he couldn't reasonably play DE in a 4-3, and that his best chance of having some success would be to move to linebacker.

Avery's appeal is that he can maybe be a hybrid linebacker / pass rusher. The Eagles only used him as the latter, in his limited snaps. His best usage was as a stand-up rusher in a "Joker" role.

We didn't include special teams clips, but he looked good in kick coverage, so he at least has that. In the regular defense, just as a pass rusher, I view him as a niche player that Schwartz will have to go out of his way to try to get him snaps in a way he can be successful. That said, if Avery can become at least a competent linebacker, his pass rush opportunities can be disguised, and thus become much more effective.

Blind squirrels and whatnot.

Anyway, we'll see what he can do at linebacker, I guess. There's a feeling that Jonathan Gannon's scheme will mimic Mike Zimmer's, which employs a lot of blitzing by the linebackers. If that's the case, that's a scheme that could suit Avery's skill set well.

It's still probably a long shot that Avery makes any kind of real impact, but linebacker is his more logical position.

Question from RKotite: Taking into consideration salary cap, age, contract status, injuries, etc... Give me the positions on the team, that right now, you can say, "I feel good about that position."

Question from Alshonymous: Was I right all along?

I've seen this question a lot, and I think it's been forgotten what Jeffery actually said. Among his complaints the first time he was the "anonymous" source:

Ertz had his best season as a pro in 2018, and was one of the rare players who was actually consistently effective in the passing game.

Also, if you'll recall, the Eagles probably had the worst set of running backs in the NFL in 2018. I mean, Josh Adams led them in rushing yards. And he wanted to run the ball more?

The second time around, he complained about the following:

Can you imagine if the Eagles didn't even have the sixth overall pick in this draft because they traded it for Ramsey? Lol.

Question from RKotite: Back in the day of the Alshon leaks, if I had told you that Wentz would be gone before Alshon, what kind of odds would you have given me?

Oh man, I'd have been out a lot of money.

I'll note here that the decision on Jeffery to be gone was made in December, by the way. It's just a matter of procedure that he isn't already a free agent. But you are certainly correct that Wentz was gone first!

Question from The Tonner: One last question from the Tonner. Does Jimmy Kempski ever get tired of writing? It's 5 o'clock somewhere!

As the regular season was winding down, I was looking forward to a nice, quiet offseason. It was stupid of me to not have known better.