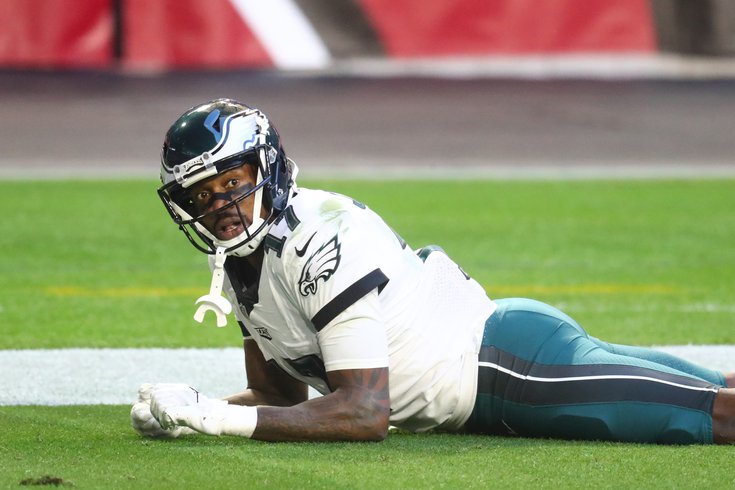 The Philadelphia Eagles have reportedly restructured the contracts of WR Alshon Jeffery and DT Malik Jackson according to a report from Mike Garafolo of NFL Network:

The #Eagles have restructured the contracts for WR Alshon Jeffery and DT Malik Jackson, sources say. Gives the team some salary cap relief in 2021 and forces them to make a decision on the players sooner, so they have a resolution in the spring.

Just to be clear here, the expectation is the #Eagles are moving on from both players. This allows them to carry less salary on their books until the June 1 dumping ground. So that's the cap flexibility I mention below. https://t.co/b9Adz8Ul0N

Do Eagles fans' anxiety a solid and lead with the "moving on from each player" part next time, please, Mike.

Anyway, what does the above mean? Jason Fitzgerald of OverTheCap.com took his best crack at it on Monday (I recommend reading his piece in full), but the crux of it is this:

The trick the Eagles are attempting to use here is the post June 1 designation but to what I would assume is the maximum extent. Every year the NFL allows you to designate two players as a post June 1 cut which allows you to prevent any future bonus money from accelerating in the current league year.

However there is a caveat and it’s that you have to keep the players cap charge on your roster as is until June 2. So for the Eagles this would be a massive $18.49M for Jeffery and $13.6M for Jackson. That does nothing for the Eagles' salary cap woes in 2021 since the savings won’t be realized at the start of the league year, forcing them to cut the players in February at dead money charges of $10.5M and $12.6M respectively.

I would imagine that what the Eagles did here was reduce the players' salaries to the minimum (for the sake of easy math lets just call it $1M) in 2021 and add a 2022 league year salary that is worth somewhere around $20M. To ensure that the player is indeed cut and allowed to be a free agent there would need to be some trigger that occurs such as the 2022 salary completely guarantees on the 2nd day of the 2021 league year, forcing Philadelphia to cut the players.

Had the Eagles just played the contracts as normal they would have saved just $8.937M on the cap by releasing these two players as normal cuts. Now they should have an extra $12M on top of that.

To be clear, there are no free lunches in the NFL. The $12 million extra that the Eagles will open up in 2021 if Fitzgerald's analysis is correct will apply to the 2022 cap instead. In other words, the Eagles are kicking the can down the road here, which is going to be a necessity this offseason for a number of players just to get back under the cap.

The key here is that the Eagles will be opening up an extra $12 million of cap space before the start of the new league year (the deadline to get under the cap) with a pair of players who were already almost certainly on their way out of Philly, as opposed to making a long-term commitment to some other aging, declining player.

It's a nice short-term solution, but it doesn't undo the terrible contracts the Eagles initially did with Jeffery and Jackson, as they will still be paying for those mistakes in 2022, again, if Fitzgerald's analysis is correct.