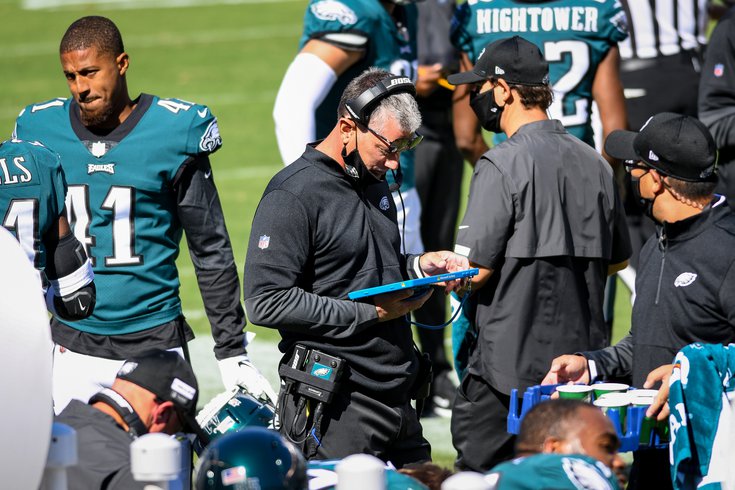 Jim Schwartz sets a reminder on his tablet to not have a bad game plan Week 3.

Jim Schwartz turned out to be the smartest person in the room. I don’t know if you had him in your pool — not many did to win that award. The decision by the now former DC to take at least a year off should come as little surprise, especially to anyone paying attention to how this team handles “departures” of any sort.

On the surface it was a preemptive move by a veteran coach, knowing the writing was on the wall for someone to take the hit. He’s seen it before and didn’t want to be the latest one thrown out to the public. Short of a “Schwartz was feared to be involved in gang activity” report, the team would do whatever they could to make sure Schwartz was the problem, not the current people in charge.

It’s called scapegoating, and it’s one of the few things the Philadelphia Eagles still do right. Schwartz is not above blame. He deserves criticism like everyone did this past season. It was an unmitigated disaster. It’s also something we’ve seen far too often with this team, especially when they control the future of someone that’s playing or coaching here.

How can anyone truly fault this man for recognizing the team would be comfortable pinning their failures on the defense and its leader, all the while bringing back Doug Pederson and Howie Roseman without even a flinch? I know I can't.

The deeper takeaway is just how bad and dysfunctional the organization appears to be. Carson Wentz continues to be surrounded by rumors about wanting out, even helping to facilitate a trade. The GM isn’t trusted by the majority of fans, including the most vocal on Twitter or the radio. The owner is slowly materializing into some perversion of Jerry Jones and Dan Snyder, having his hands in all types of personnel moves while emasculating his HC, calling into question the very culture that coach established.

Again, can you truly fault Schwartz for wanting out? How about Wentz? At what point do we have the necessary conversation about people wanting to leave this team? It’s ridiculous! That’s not Philadelphia; that’s not even Cleveland. This is some hilarious comedy of errors we are used to finding in Jacksonville or with the Jets.

Yes, the Eagles will find a new body to come in here and run the defense. Whether that person gets total control or not is yet to be seen. Either way, don’t let the opening itself distract you from the bigger takeaway; people want out.

Schwartz leaving – and possibly Wentz too – signifies how people inside the building are sick and tired of the schoolyard-like atmosphere where chaos seems to rule. He saw it himself early on in Philadelphia. Schwartz himself was wrapped up in reports about him wanting to usurp Pederson as head coach.

It's hard to think Schwartz forgot that and how the team can operate. Hell, maybe he himself was part of it when one of his own players moved on. But either way, the man saw the writing on the wall, as it is so often written in bright neon and all caps.

Schwartz taking a year off, finding a new DC job, and helping a team make the playoffs is about as believable as it gets. Why? Because that’s what happens in Philadelphia. Same thing with Wentz. Watch him make the Pro Bowl in Indy. Why? Because people come here to struggle – be it as player or coach – and leave to thrive. I’ve seen it elsewhere.

No business can survive like that, especially in the competitive realm of the NFL. Be it a football team or radio station; you simply can’t win when you aren’t coaching or developing talent.

COVID-19 and the Eagles

We love to compartmentalize and simplify — not just as Eagles fans, but as human beings. We best grasp a concept or person or anything in between by placing it inside its own box, then reducing its definition to a word or phrase. We simply don’t have time to sit and break down everything into atoms.

COVID-19 is no exception in the sports world, especially the NFL world. The league did not have to cancel a single game. It made it through the entire regular season without needing any extra time before the playoffs. All without playing inside a bubble! Pretty impressive by the league.

I had a rather insightful conversation with FOX 29’s Kristen Rodgers – she provided the majority of it – specifically with the impact on the Eagles vs. other teams around the league.

You can hear the entire interview below, but her thoughts on how the Eagles’ culture was more impacted by COVID than most teams in the NFL is worth a listen. It’s something that hasn’t been discussed nearly enough and is a huge factor in how this season was defined.

Take a listen at 13:06 to Kristen’s thoughts on COVID impacting the team

Now that the Eagles season is over, we will change this to simply the Sports Bet of the Week. NFL playoffs are first up, so pay attention!

As always, we suggest you shop around and find the best value. The Ravens vs. Titans is the one that jumps out the most, but it’s the total that really sings. Both teams want to run the football as much as possible but can – if forced to – throw the ball.

There will be a revenge factor from last year, for sure. The Titans have already been through that and might not take the Ravens as lightly as others believe. The total sits at either 54 or 54.5 — according to TheLines.com's consensus odds, and I would confidently go over the number. One of these teams is going to hit in the low to mid 30’s. If that’s the Titans, there’s an even better chance they give up as much or more.

The only real difference between this year’s matchup and last year is the lack of D in Nashville. Both teams will move the ball, and we already know the Titans aren’t stopping anyone. Go OVER 54/54.5.

The last Eagles game of the regular season was… difficult to watch: