The Eagles GM compared him to "fingers on your hands," while Doug Pederson said his relationship with the QB is just fine. 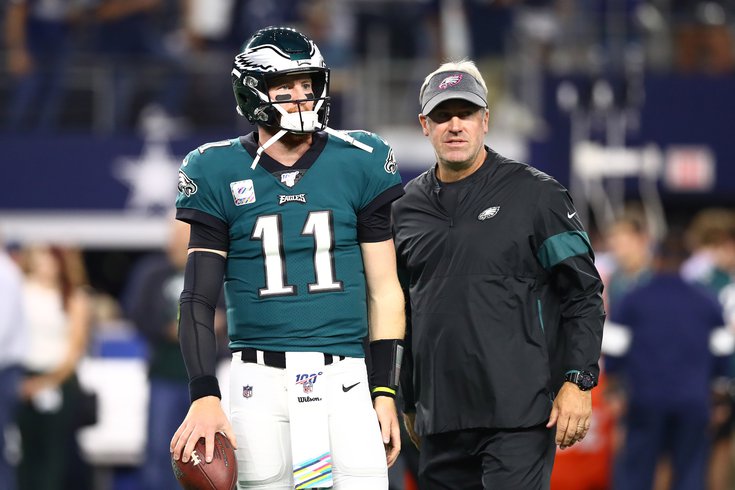 If you're one of the many Eagles fans who are concerned that the team will trade Carson Wentz away, GM Howie Roseman's comments Monday may have tempered those concerns.

Or maybe not. What else do you expect him to say?

The man who laid the blueprint for the Eagles' failure of a season in 2020 — and also the architect of their Super Bowl champion squad three years ago — talked to media members for the first time since September, and was immediately put on the spot about the rumors regarding Wentz, who reportedly will request a trade.

"That is not anything that we are talking about right now," Roseman said when asked if they were considering a trade. "We're talking about a guy who is immensely talented, who has a great work ethic and who we want to put in the best position to be successful."

Of course, it makes sense for Roseman to play nice and appeal to a clearly emotional Wentz, fresh off being benched despite having his first fully healthy season since 2016. But is this just posturing? Is it misdirection?

"I don't think it's a secret that we moved up for him [in the 2016 NFL Draft] because of what we thought about him," Roseman said. "We gave him the extension for the same reason. When you have players like that, they're like fingers on your hands. You can't even imagine they're not here. That's how I feel about Carson."

Ignoring for a second that Roseman speaks about his players (to whom he clearly becomes emotionally attached) with a romantic quill that would make Shakespeare proud, it sounds as though the Eagles are intentionally refuting the consistent reporting from big names like Chris Mortensen and Adam Schefter.

One of the things mentioned in reporting this weekend was the "fracture" in the relationship between Wentz and head coach Doug Pederson. That's another one Roseman, and even Pederson himself tried to snuff out on Monday.

"The team as a whole didn't perform up to expectation, the moves that we made didn't live up to expectation, and to put that on Carson is unfair," Roseman said. "We have a lot of confidence in his ability and in his relationship with Doug."

"The relationship is good, it's fine," Pederson added. "It's something we're going to continue to build upon. I know Carson's disappointed. It's not the season we had anticipated, there were a lot of moving parts. It's not about one guy here; it takes all of us. It's something we've stressed a lot here."

Clearly, with Wentz playing worse than any other starting quarterback in 2020 and second-round pick Jalen Hurts impressing in relief for four games (or at least in part, his weird three quarters of playing with a practice squad roster in Week 17 not withstanding), the quarterback situation was an absolute disaster in Philadelphia this season. Remember that remark about Philly being a quarterback factory? So much for that.

"I certainly regret that comment about quarterback factory," Roseman frankly said. "It was just about the importance of the position in the NFL and a reflection of our experience in backup quarterbacks when I said that. Anyone who knows Carson knows how strong of a person he is and knows how much be believes in his own ability."

Of course, none of the remarks from the Eagles' decision-makers mean much. Their actions over the next few months will speak louder than any PR directer-tested press conference quotes will. We'll see if the team's upcoming actions match their words.