What they're saying: Top candidates to replace Jim Schwartz as Eagles DC, from Dan Quinn to DeMeco Ryans 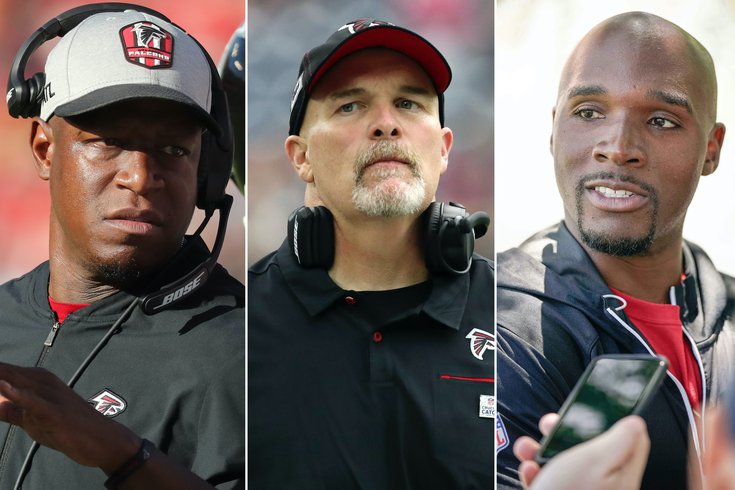 The Eagles season will officially come to an end on Sunday night, and whether the team is 4-11-1 or 5-10-1 won't matter all that much — aside from draft positioning, that is. But when it comes to the how the team rights this ship moving forward, it seems like for the most part, the team's self evaluation is more or less done.

That's why, in the last two days, there have been reports that both Doug Pederson and Howie Roseman will be back. But that doesn't mean there won't be change, as Pederson will reportedly have to re-shape his offensive staff this offseason, perhaps finally hiring an offensive coordinator that will take over play-calling. Furthermore, there was an additional report on Sunday morning that quarterback Carson Wentz wants out of Philly and will help facilitate a trade in order to make that happen. Whether or not the team is able to work out a deal — let alone willing to take on his massive dead cap hit — remains to be seem.

The one person, at least at this point, that we can feel fairly confident won't be back on the sideline next season is defensive coordinator Jim Schwartz, who will reportedly take the 2021 season off and could ultimately retire from football. Of course, questions will be raised over Schwartz's exit and whether or not this was 100% his decisions or if he was politely asked to step down rather than be fired. After all, a Super Bowl winning coordinator who has essentially been the head coach of the defense for the last half decade probably deserves as much, especially when an argument can be made that his unit was less culpable than the others this season.

The question now becomes where the Eagles go from here. Do they go after a big name — and is the team even desirable enough to attract someone with a pedigree? Do they promote someone in house? Or do they scour the market for a hot up-and-coming coach looking for his first shot as coordinator?

The Birds should have plenty of options — and some stiff competition when it comes to hiring a defensive coordinator. That's what we'll examine in a special Sunday edition of What They're Saying...

[Note: As is the case every January in the NFL, there are a lot of opinions and spicy takes out there in the immediate aftermath of a season, so we'll have more WTS posts this week than normal in an effort to keep you up to date with all the latest.]

Over at The Athletic, Bo Wulf makes a compelling case as to why the Eagles could opt to replace Schwartz from within. And if they do that, Matt Burke and Marquand Manuel are the two most obvious options, given their past defensive coordinator experience.

Given the cap situation and the makeup of the roster, there really isn’t flexibility for the Eagles to chase a wholesale scheme change, which might make Burke the front-runner. If the entire front-office structure remains the same, a relative status quo also becomes more likely. For instance, Howie Roseman paid Hargrave to be a penetrating fit in Schwartz’s scheme, not to two-gap.

But there will be viable options outside the organization. On the market already are coaches like Lovie Smith, Dan Quinn and Steve Wilks. Others, like Gus Bradley or old friend Cory Undlin, could shake loose after firings across the league. The possibility I have my eye on is John Fox, the former Bears, Broncos and Panthers head coach, who shares an agent with Pederson and visited Eagles training camp in the summer.  [theathletic.com]

We'll get into some of those external options (plus others) in a bit.

If the Eagles look to bring in someone from the outside, they'll face some competition in the job market. There are several teams that are expected to have openings, but if the Eagles are willing to give someone the same level of control over the defense that they gave to Schwartz, it could be an attractive opening to those looking to eventually earn a head coaching gig.

Of course, if Howie Roseman and Co. don't draft the right players, that could blow up in a candidates face. Here's more from Mike Kaye of NJ.com...

The Eagles’ defensive coordinator job has unusual optics, especially due to the reports that Pederson will be retained next week. While the appeal of being “the head coach on defense” is there, Pederson is clearly on a prove-it year if he’s back, meaning the job could be a one-and-done opportunity with an offense that is struggling to put up points. Remember, the Eagles haven’t scored more than 30 points in a game this season, which put a lot of pressure on Schwartz’s defense to hold up.

That said, few coordinators are given as much autonomy as the Eagles’ DC under Pederson. Schwartz was basically able to run half of the roster on his own accord. For an experienced defensive coordinator, that creates an opportunity to put his stamp on the success/failure of the group. Those looking for head-coaching jobs down the line could use this job as a stepping stone for advancement, even if the post is short-lived.  [nj.com]

Now, let's look at some of those outside candidates, starting with a pair of former head coaches who were let go earlier in the season and could find themselves as coordinators next season rather than in a new head coaching position. The Delaware News Journal's Martin Frank weighs in...

Quinn became the Falcons' head coach in 2015 after serving as the Seattle Seahawks' defensive coordinator in 2013-14, which was the height of Seattle's dominating defense nicknamed "The Legion of Boom."

Under Quinn, the Falcons reached the Super Bowl in the 2016 season. The following season, Atlanta ranked eighth in points allowed and ninth in yards allowed. The Falcons also made the playoffs in 2017, losing 15-10 to the Eagles in the divisional round. The Eagles went on to win the Super Bowl that season.

Quinn was fired earlier this season following an 0-5 start. Overall, his record as a head coach was 43-42.

Before that, Patricia was the Patriots' defensive coordinator from 2012-17. During that time, the Patriots won two Super Bowls and New England allowed the fewest points in the NFL in 2016.

Then again, Nick Foles and the Eagles' torched Patricia's defense in what would be Patricia's final game with New England. Foles was named the Super Bowl MVP after throwing for 373 yards and 3 TDs in the Eagles' 41-33 win.  [delawareonline.com]

For these two candidates, the Eagles will have to wait and see whether or not they're even available this offseason, but the bet here is that both will be looking for work before too long. Here's more from Dave Zangaro...

Gus Bradley: Everyone back on the Gus Bus! Bradley is the Chargers’ DC but there are serious questions about the future of the staff in LA, so he’s a top name that might be available very soon. Bradley was a popular name back in 2013 when the Eagles hired Chip Kelly as their head coach, but Bradley ended up with the Jaguars. He was a top candidate that year coming off an impressive four-year run as the Seahawks’ DC.

Raheem Morris: Right now, Morris is the Falcons’ DC and interim head coach. But if they don’t hire him as their head coach, he’ll likely be available. Morris actually replaced Manuel as the DC in 2020. Morris has DC and head coaching experience in the NFL.  [nbcsports.com]

He also mentions Wade Phillips, but for the reason Mike Kaye outlined above (not wanting to change the entire defensive scheme and personnel) we'll leave him out here. But there was one last name from Dave that Eagles fans might like, especially those that are looking for someone younger.

DeMeco Ryans: The former Eagles linebacker appears to have a bright coaching future ahead of him. He’s the 49ers’ inside linebackers coach and has held that position since 2018. But even during his playing days there was no question Ryans was destined to be a coach. If Robert Saleh gets a head coaching job and Ryans doesn’t get promoted in San Francisco, getting him back in Philly might be an option.  [nbcsports.com]

And finally, we get to a pair of guys who were out of the NFL in 2020, meaning they may be a little easier for the Birds to land. Glenn Erby of The Eagles Wire has more on two guys who have coordinator experience and could wind up in Philly next season...

Richard took a break from coaching this season and prior to that, he was the defensive backs coach in Dallas.  Richard spent eight years with the Seahawks, the final three as defensive coordinator 2015-17, where his defenses ranked second, fifth, and 11th.

Wilks’s last gig was as defensive coordinator in Cleveland before Kevin Stefanski went with Joe Woods.

In 2017, his only other season as a defensive coordinator, Wilks’ Carolina Panthers finished third in rushing defense.

His positional expertise is also in the secondary, something that could help the Eagles in more than one area.  [theeagleswire.usatoday.com]