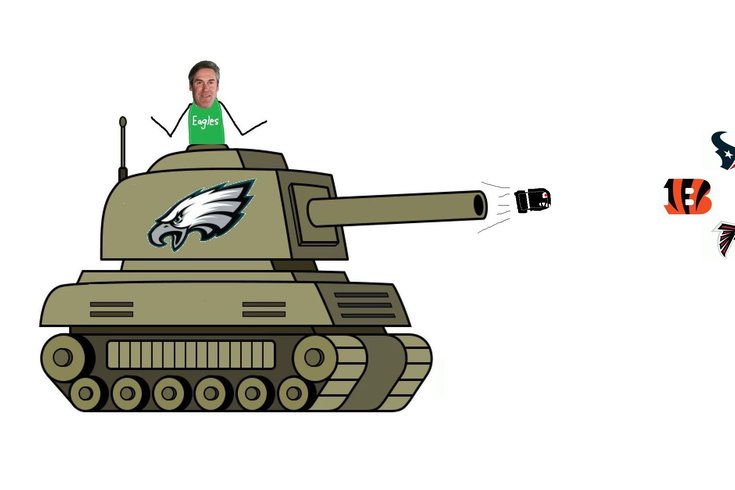 Now mathematically eliminated from the playoffs, it's pretty clear that the Philadelphia Eagles are in full on tank mode. They're holding NINE players out of their meaningless Week 17 game against the Washington Football Team, most of whom are starters. That's on top of their already extremely lengthy list of players on injured reserve.

The Birds have already clinched a top 10 pick in the 2021 NFL Draft. They are currently sixth in the draft order, and they can also be no worse than sixth if they lose to the Football Team. They can climb as high as third in the draft order if they lose, an unlikely but possible scenario.

Let's go ahead and show the current draft order, via Tankathon, and we'll analyze it thereafter. 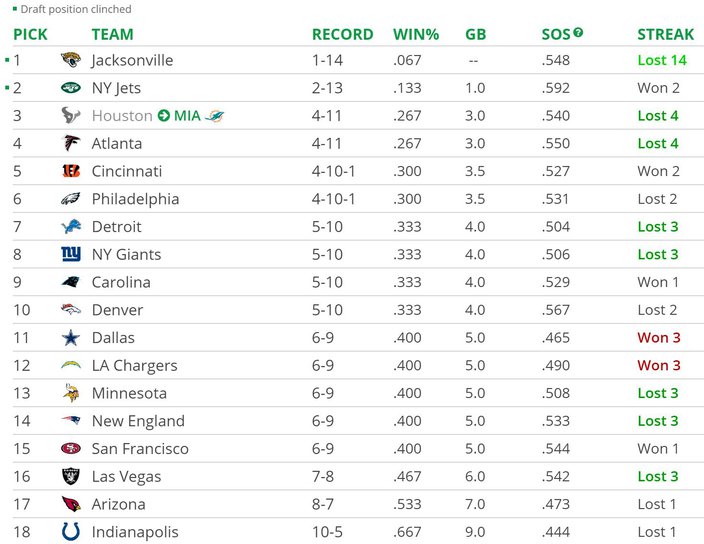 First, let's look at the three teams the Eagles can potentially pass today...

• The 4-11 Texans' pick (owned by the Dolphins): The Texans play the Titans, and are 7-point underdogs. On the one hand, they have no reason to tank this game, since they don't own their first-round pick. On the other hand, as we noted in our Week 17 picks, they seem to have already checked out on this season. ESPN's "matchup predictor" gives the Texans a 41.5 percent chance of winning this game, which feels generous.

• The 4-11 Falcons: The Falcons play the Buccaneers in Tampa, and they too are 7-point underdogs. It's worth noting that the Falcons played the Chiefs tough in Kansas City last Sunday and they only listed three players as out on their injury report, so they are perhaps still fighting for some dumb reason. With a win, the Buccaneers can clinch a wildcard round matchup against whatever team wins the pathetic NFC East. ESPN's "matchup predictor" gives the Falcons a 25.5 percent chance of beating the Bucs. I like their chances a little bit more than ESPN's analytics nerds do.

• The 4-10-1 Bengals: The Eagles and Bengals are tied with a record 4-10-1, but the Bengals currently hold the tiebreaker based on opposing strength of schedule. The great Deniz Selman figured out that for the Eagles to pass the Bengals on strength of schedule, the Dolphins and Chargers would both have to win, and the Saints and Packers would both have to lose.

Complete #Eagles Week 17 #NFLDraft positioning scenarios. Eagles don't play until #SNF, so will know precisely how result will impact draft pick: could be anything from no impact (locked into 6th no matter what) to 7 spots (dropping from 3rd all the way to 10th with a win). pic.twitter.com/pkP9Smc5fq

I could explain how he arrived at that, but you're better off allocating those brain cells to something more useful. Anyway, realistically, the Eagles need to the Bengals to lose to pass them. The Bengals are 14-point underdogs to the Ravens, who are "win and in." ESPN is giving the Bengals a 25.7 percent chance of winning. Lol what?!?

And now the teams that can pass the Eagles if the Eagles stupidly win...

• The 5-10 Giants: They host the Cowboys for the right to win the NFC East if the Football Team can beat the tanking Eagles. It's also worth noting that if the Giants pass the Eagles in the draft order, they will also get a last place schedule, and the Eagles would get a third place schedule.

• The 5-10 Panthers: The Panthers play the Saints, who can earn the 1 seed if they win and the Packers lose.

• The 5-10 Broncos: The Broncos host the recently free-falling Raiders.