Eagles should tank their Week 17 game vs. Washington

The Philadelphia Eagles have one final game to play Week 17 against the Washington Football Team, and then their nightmare of a season will be over. It is imperative that they lose that game, pride be damned.

The reasons that a loss is ideal go beyond securing as high a draft pick as possible, though certainly, that's as good a reason as any. We'll lay out the motivation for tanking here.

The Eagles have clinched a top 10 pick already, but the higher they can get in the draft order, the better. #Analysis. More accurately, they will pick somewhere in between third and tenth when the initial draft order is set. If the season ended today, the Eagles would be picking sixth, behind the Jaguars, Jets, Dolphins (who own the Texans' pick), Falcons and Bengals. A visual of the draft order, via Tankathon: 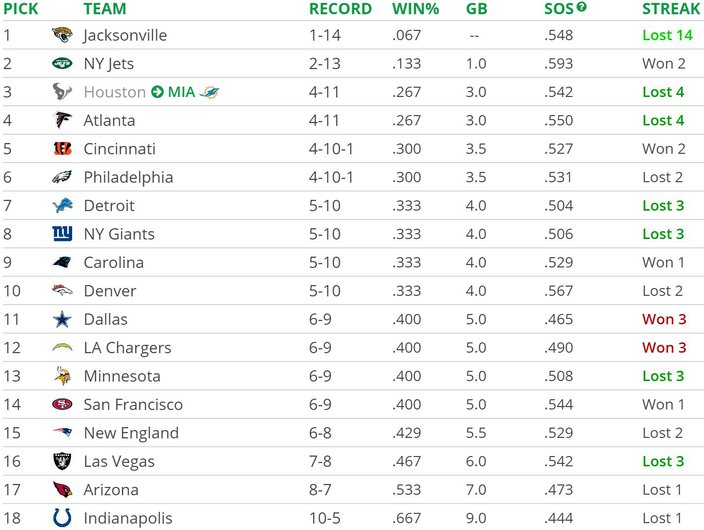 If the Eagles lose on Sunday, they will jump any four-win team above that wins. That group would include the Texans (pick owned by Miami), Falcons, and Bengals.

If the Eagles win on Sunday, they will fall behind any five-win team that loses. That group would include the Lions, Giants, Panthers, and Broncos.

Barring any further ties, the Bengals are the only team the Eagles can have the same record as when the season is over, because as you will unfortunately recall, they played to a tie Week 3. The Bengals would win the tiebreaker if the season ended today, because they have the weaker strength of schedule (or combined opponent winning percentage), though the two teams are only separated by .004 on that front.

If two teams finish the season with the same record and the same strength of schedule, the only other tiebreaker used to be a coin toss, which actually happened more than you would think. Remember when the Eagles won a coin toss for the 14th overall pick in the 2017 draft? Anyway, the NFL recently changed the tiebreaking procedure, noted here, via ProFootballNetwork.com:

If a tie remains between teams with both the same record and the same strength of schedule, and the teams are not from the same conference, then the following tiebreaking procedures are followed:

1) Head-to-head record: the team with the worse record in games played against each other is awarded the higher pick in the NFL draft order.

The Eagles and Bengals were 0-0-1 against each other, so tiebreaker No. 2 would come into play. Their common opponents are as follows:

So the Bengals would pick higher.

(And before you say, "Who cares where they are in the draft order as long as Howie Roseman is picking the players," please note that the further back in the order the Eagles land, the less obvious the correct pick becomes.)

Leading up Week 16, Fletcher Cox didn't practice all week with a neck injury. He went out of the Cowboys game early with what the team called a "stinger," and he could not return. We all saw what happened to the defense once his day was over. Obviously, it would be insanity for Cox to to play through a neck injury Week 17. IR him, and sit anyone else who has an injury that has any chance of getting worse.

But also, the Eagles must be smart about who plays Week 17 for other reasons.

Carson Wentz should be inactive, for example. There's no sense in getting Wentz hurt in a meaningless game, and turning off potential suitors in a trade. The same should apply for someone like Zach Ertz.

There's also Derek Barnett, whose $10,051,000 fifth-year option is guaranteed for injury. While the Eagles may very well choose to keep Barnett at $10 million or get a new deal done with him, under no circumstances should Barnett be exposed to any sort of injury that would trigger that guarantee, which would limit their options with him.

It's ideal if the Football Team wins the NFC East

If the Eagles could hand-pick the most ideal team to win the NFC East, it would probably be the Football Team, which has a good roster, highlighted by a deep and very talented defensive line, but no quarterback. Should the Football Team win the division, they will pick no better than 19th overall, thus making it very difficult to land a top tier quarterback prospect.

If the Football Team beats the Eagles on Sunday, they're in, without any other help needed.

But what about integrity?

A few weeks ago, Jason Kelce opined that every effort should go into winning games, under any and all circumstances:

Jason Kelce passionately explains why winning takes precedent in the NFL over everything, including evaluating youth in a down season. pic.twitter.com/x9CyzqQ47e

As we have seen in his Eagles tenure, Kelce is a prideful player. His beliefs on the subject are how every player and coach should think. Hell, it's how every fan should want their players to think.

But winning a meaningless game Week 17 during one of the most miserable seasons ever has no value.

The Eagles should expect Doug Pederson and his players to go out and try to win their final game. They should just have them try to do it without any good player suffering from a hangnail.