Eagles save their season by losing to Cowboys

The loss in Dallas eliminated the Birds from playoff contention, but guarantees they'll have a top 10 draft pick. 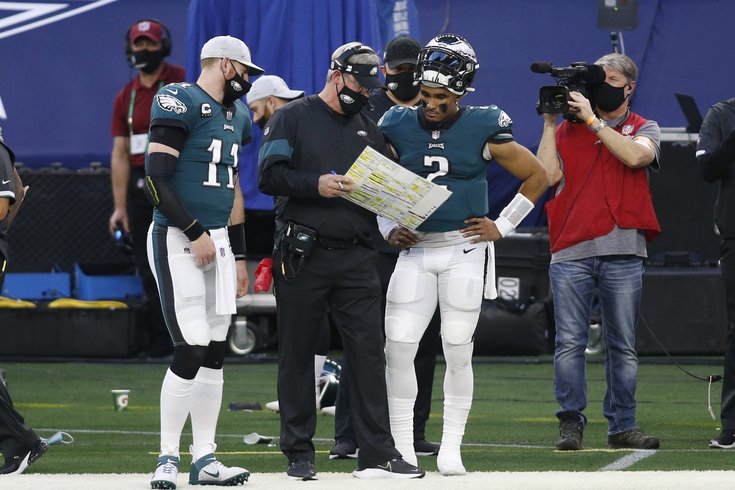 The Eagles season (for all intents and purposes) ended in the most fitting of fashions Sunday evening.

With the Giants losing to Baltimore early and the Washington Football team struggling against Carolina (they trailed by double digits most of the game), Jalen Hurts connected with DeSean Jackson on an 81-yard touchdown pass to put the Eagles up 14-3. A battle with the WFT for the NFC East next week seemed to be inevitable.

All the heartache, drama and losing from the last four months would be worth it, as the Eagles would control their own destiny and be one win away from being able to claim the special title of "worst playoff team ever."

But that's when the Cowboys made a key realization. The Eagles secondary sucks.

Whether it is due to injuries or under-skilled cornerbacks and safeties, Dallas went after the Eagles and Andy Dalton feasted to the tune of a 37-17 beat down of the Birds. The Cowboys' backup threw for 377 yards, a week after Arizona's Kyler Murray threw for over 400. Big plays of 52, 55 and 69 yards gave Michael Gallup (121 yards), Amari Cooper (121) and CeeDee Lamb (65) more than 300 yards combined as Dallas' typically lackluster defense shut out Philly in the second half.

The Eagles fell apart in a situation that was almost exactly the same as ones they prevailed in during each of the last two Decembers, as Philly won with its back against the wall, got some help, and slid into two improbable playoff berths in 2018 and 2019.

There will not be a third such January ahead, as fans will be forced to reckon with the harsh reality that losing in Dallas to the hated Cowboys Sunday night was a good thing. It was, in fact, actually better than winning the NFC East.

For those naturally inclined to root for your chosen team to win — something that is completely understandable — it was a bitter pill to swallow in Week 16, seeing the opportunity right before the Eagles' eyes. Heading into Sunday, Philly had a 9% chance of making the playoffs according to fivethirtyeight.com. A win would have given the Eagles a 56% chance.

The Eagles would almost assuredly lose in the first (or second round). A division title would likely save the jobs of underachieving Howie Roseman, Doug Pederson and others. And winning the NFC East would put the Eagles in the 19th spot in the draft picking order. Instead, they are now guaranteed a top 10 pick. With a roster that is old, overpaid and in need of an extensive overhaul, that draft positioning will be crucial.

In any other division the Eagles would have been eliminated weeks ago. They are simply a bad football team in a bad division. An empty division title would have, of course, threatened the team's best chances at future success.

With their loss Sunday, the Eagles are currently slotted in the sixth spot in the 2020 NFL Draft, and with some help could improve all the way to the third overall selection.

The Eagles have a pretty meaningless game next week, one they'll likely use to evaluate some younger players. But the evaluation that matters most has already taken place — and after 956 yards passing, six touchdowns, three interceptions (plus 268 rushing yards on 43 carries) from Hurts in three and a half games in relief of the struggling Carson Wentz, the Eagles should know (or at least have a better idea of) who will be under center in 2021.

Ironically, after giving the Cowboys a gift in Week 16 with their anemic secondary being burnt time and time again by Dallas receivers, they can still ruin their rivals' season. If the Eagles lose to Washington at home next Sunday, a 1 p.m. start, they'll eliminate Dallas from the NFC East.

Not to overestimate the power of the draft, but the Eagles will have the power in their hands to relegate a fellow NFC East opponent to the 19th overall pick while the other two will have picks around the top 10.

Still, the true drama will come after the final whistle is blown, as the numerous questions regarding the short term future of a team three years removed from a Super Bowl crown continue to pile up.

RELATED: Let's all get on the same page regarding the Eagles' options with Carson Wentz