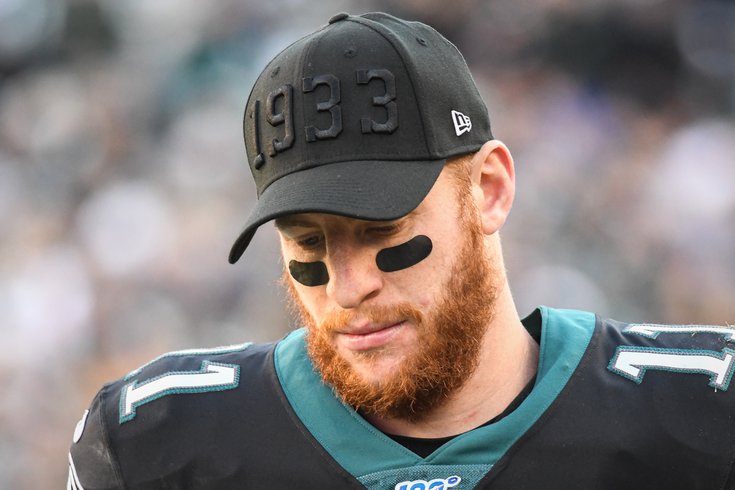 In 2017, for one season, Carson Wentz was the best player in the NFL until he shredded his knee in Los Angeles. Fewer than three full years later, he was benched, in-game, in favor of rookie second-round pick Jalen Hurts, against the Packers.

Hurts provided a spark in that game, earned the opportunity to start another, and then beat the 10-2 Saints in his NFL starting debut. In the 12 games that Wentz started, he was one of the worst starters in the NFL, posting the following numbers.

With a young quarterback in Hurts showing some life, the Wentz rumors have begun to swirl locally and nationally, so we may as well get on the same page in regard to the nuts and bolts of his contract, and the options that the Eagles will have with him during the 2021 offseason. (I would also recommend listening to Joel Corry's podcast on the topic, which served as a reference for this article.)

But what about a June 1 release?

I've seen it suggested that this is a legitimate possibility. It is not.

That is not a better option than just keeping Wentz and hoping he figures out how to be a good quarterback again, or trading him.

Can the Eagles trade Wentz?

Back in February, in researching a similar piece on Alshon Jeffery, I asked Jason Fitzgerald of OverTheCap to give me the biggest dead money hits in NFL history. His list is below (I added in Brandin Cooks and Nick Foles, who have since also had sizeable dead money hits):

If the Eagles were willing to trade Wentz and take on $33.8 million in dead money, it would be the biggest dead money hit in NFL history by a country mile, clearing the previous dead money hit leader (Cooks) by $12 million.

The benefit, however, would be that the Eagles could rip off the proverbial Band-Aid, as Wentz would not count on the cap at all in 2022 or beyond.

Would the Eagles trade Wentz?

If some other team made an offer that appealed to them and was worth taking on the almost $34 million cap hit in 2021, and they got it done by March 19, sure. #Analysis.

What would Wentz's contract look like for an acquiring team?

In 2023 or 2024, the acquiring team could trade or release Wentz with no cap penalties.

On Sunday, a couple different media reports suggested that Wentz's contract is "very tradable." It's certainly "tradable," but personally, I'd lose the "very."

Who are the logical suitors if the Eagles made Wentz available?

The list of logical trading partners isn't exactly robust. Below is a quick list of the teams that might not have an answer at quarterback yet in 2021:

Forget about the Jets and Jaguars. They're almost certainly going to have the top two picks in the 2021 NFL Draft, and take quarterbacks.

Forget the Saints. They're in worse cap hell than the Eagles in 2021.

Forget the Football Team. While the Eagles traded Donovan McNabb to their NFC East rival once upon a time, they did so when McNabb was 33 years old, and it was considered bold even then. Wentz turns 28 later this month. Trading Wentz to a divisional opponent, and then seeing him figure things out and having to face him twice a year for the foreseeable future feels far riskier than when the team dealt McNabb.

The Bears, Broncos, and 49ers feel highly unlikely. They'd have to do substantial cap space juggling to fit Wentz in, though to note, an acquiring team could convert some of Wentz's salary into a signing bonus, thus lowering Wentz's 2021 cap number and spreading that cost over future years.

So... barring some catastrophic injury or surprise retirement by a quarterback between now and March 19, that leaves the Patriots and Colts as the only true logical Wentz suitors, as teams with a need at quarterback and ample cap space to fit him in comfortably.

The Colts, of course, are the most logical potential trade partner, with Frank Reich in place as Indy's head coach. The aging Philip Rivers is on a one-year deal and in need of surgery when the season ends.

The Patriots are the other, with Cam Newton looking like a shell of his former self, and his contract expiring after this season as well.

MORE: What they're saying: Let the Carson Wentz trade speculation begin (yes, the Eagles can actually trade him)

So what would the asking price be?

First, let's take a look at the Eagles' history of trading quarterbacks:

Excluding the Foles-for-Bradford trade made by Chip Kelly, the Eagles have mostly maximized quarterback trade value over the years. In other words, I would not expect the Eagles to just give Wentz away in order to get him off their books.

Seeing as Wentz is a far more attractive trade piece than Bradford was in 2016, the guess here is that it would take at least what the Eagles got for Bradford (a 1 and a 4) to convince Jeffrey Lurie to allow Wentz to be traded. Taking less might make sense if you're willing to think of money already paid to Wentz as a sunk cost, but that's an easier premise to swallow when it's not your money. Lurie has already paid Wentz over $56 million since Wentz signed his new contract 18 months ago.

If Wentz is going to be playing for another team, Lurie is very likely going to want to see something worthwhile in return.

What would other teams expect to pay?

Where Wentz ranks among those quarterbacks (at the time they were dealt) is in the eye of the beholder.

Carson Wentz won't be released. While he could be traded, the bet here is that the Eagles' demands and another potential team's willingness to acquire Wentz as a reclamation project (but only on a bargain deal) will not align.

In my view, the most likely scenario is that Wentz will remain on the team in 2021, and he will have to battle it out with Jalen Hurts for the starting job during training camp.

If Wentz wins the job, plays well, and looks like he's something closer to what we all expected this year, then great. If he's bad again, or if Hurts beats him out, then the Eagles will have a $128 million backup, and it'll cost them $24,547,075 in dead money to trade or release him during the 2022 offseason.