In Week 1 of the 2020 season, the Philadelphia Eagles got off to a strong start against the Washington Football Team, before it all fell apart. In Week 16, in their last meaningful game of the season, against another division rival in the Dallas Cowboys, it pretty much went the same way.

In between, there were eight other (mostly) miserable losses -- and a tie(!) -- in what will be viewed as one of the worst seasons in franchise history. As always, win or lose, we hand out 10 awards. 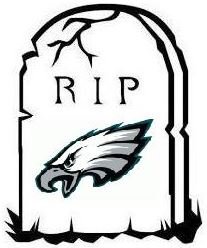 With their loss to the Cowboys, the Eagles are now officially eliminated from playoff contention. The final score was 37-17, but really, who cares? The offense stunk. The defense really stunk. And the special teams stunk. The team will have a very quiet flight home from Dallas, and a week and a day from today, they'll clean out their lockers. A lot of players will never return, and perhaps some big changes will also occur within the coaching staff and the front office.

Just look at it. Isn't it just a special kind of ugly, with that tie in there?

2) The 'Opportunity Squanderers' Award: Doug Pederson and the coaching staff

The Eagles were the only team in the NFC East to return their coaching staff this season, as the Cowboys, the Giants, and Football Team all hired new head coaches. In a drastically shortened offseason as a result of COVID, the three other teams in the division had the major disadvantage of having to install their offenses, defenses, and overall philosophies in short order, and oftentimes remotely via Zoom.

Meanwhile, the Eagles were returning their head coach, quarterback, and defensive coordinator for their fifth straight season, and seemingly should have had a leg up on their competition. In the end, the Eagles were the first team eliminated in the wretched NFC East.

3) The 'They Did Their Best To Keep the Eagles In It' Award: The Entire NFC East

Somehow the Eagles entered this weekend at 4-9-1 and still had a path to an NFC East championship. They needed the following to occur:

The Giants and Football Team did their part, as they both feebly lost, but the Eagles failed to capitalize, just like they did the entire rest of the season.

• The Cowboys started four different quarterbacks this season, and were missing their top three offensive linemen.

• The Giants lost their starting quarterback for a bit, and they lost their best player overall for the season.

• The Football Team started three different quarterbacks this season, and even benched the Week 1 starter for a practice squad guy Week 16.

A record of 6-9-1 would have gotten the job done! But nope. Instead of dominating this trash division like we all thought they would after they won their first Super Bowl fewer than three years ago, they are officially at the bottom of the barrel in the NFC East.

Hurts started this game off hot, but he would eventually throw two bad INTs, and fumble twice, losing one. At the end of the season, the Eagles will take a hard look at Hurts' play over the final four-plus games of the season, and try to decide if he's the quarterback they want to roll with going forward, or if they will consider drafting a quarterback with the high pick they're going to have the 2021 NFL Draft.

They'll also have to figure out whether they're going to keep or trade Carson Wentz.

Those questions will be covered endlessly this offseason, so we won't get into all that here. We'll just note that Hurts helped his stock against the Saints and Cardinals, but did not help himself against the Cowboys.

Poor Michael Jacquet. The guy is an undrafted rookie free agent forced into a starting role, and he got absolutely abused by the Cowboys' passing attack. After he got benched, the FOX crew put a graphic on the screen that said he gave up 7 catches for 182 yards on 9 targets. Yeesh.

6) The 'No Pressure' Award: The Eagles' defensive line

Josh Sweat and Derek Barnett didn't make the trip to Dallas, while Fletcher Cox was forced out of the game early, and did not return. This is probably right:

When you saw this, everyone knew it was over@JimmyKempski pic.twitter.com/e2XSx2C9sH

Andy Dalton had all day to throw, and Cowboys receivers were running wide open all day in the secondary. Yes, the Eagles couldn't cover anyone, but the pass rush didn't help.

7) The 'Congrats On Your INT' Award: Darius Slay

Slay made his first interception of the season, and actually, it was the first Eagles INT by a CB all season long. Yes, that's correct. In their first 14 games, Eagles corners failed to register a single INT.

After the game, Slay accepted congratulations from an assortment of players and fans. For example:

This was of course not long after the Eagles were officially eliminated from playoff contention, with a 4-10-1 record, in a game they lost 37-17, and gave up 513 yards.

Not to pick on a reserve offensive lineman playing a position he is ill-equipped to play, but there were two occasions in which the Eagles had some momentum going offensively that Pryor brought to screeching halts with penalties. Eh, whatever.

Ultimately, a loss is probably what was best for this team that wasn't going anywhere in the playoffs anyway if they somehow lucked into a divisional title. They'll land somewhere between third and tenth in the draft order. A look at the updated draft order, via Tankathon: 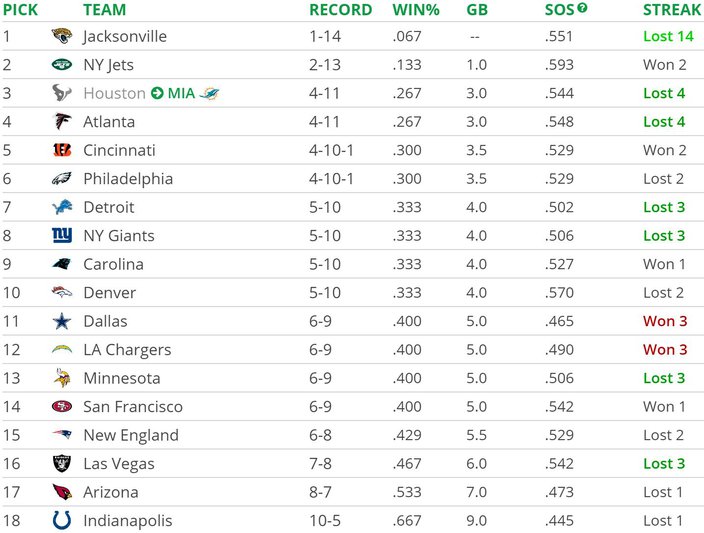 Every Eagles fan should also be fans of the Falcons, Texans, and Bengals Week 17. Oh, and it is imperative that the Eagles lose to the Football Team.

10) The 'Who Will Make the Picks, Though?' Award: Jeffrey Lurie

It sure as hell shouldn't be Howie Roseman. The Eagles' clear best path going forward is to blow it all up. But will Lurie part with his long-term confidant? Reports suggest Lurie won't replace Roseman, but it's nearly impossible to come up with reasons why he shouldn't.