Wait, there's a way for the Eagles to trade Wentz without taking on his entire $34 million cap hit?

Unfortunately, the mechanics of making it happen are easier said than done... 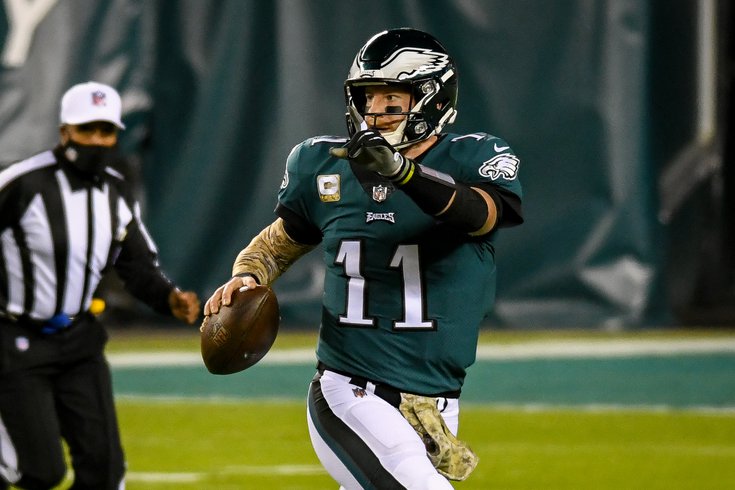 What if I told you there was a way the Eagles could trade Carson Wentz this offseason and not be saddled with that $34 million dead money hit next season? Is that something you might be interested in?

For anyone who believes Wentz's time is up in Philly and that both parties would be best served by the team moving on from the 28-year-old quarterback (happy birthday, by the way), the answer is likely a resounding yes.

Well, as it turns out, there's actually a way Wentz and the Eagles could make it work, and potentially lower the quarterbacks dead cap hit by $20 million dollars. But it wouldn't necessarily be easy, as it would require Wentz handing the Birds a check for $20 million dollars. Yes, you read that right, Wentz would have to pay the Eagles just for the right to move on — and he would have to pay that money back before he'd have any way of knowing if he was ever going to see it again.

A few weeks back, our own Jimmy Kempski broke down all of the Eagles' options with Wentz, and this didn't even register as an option — probably because it's an absolutely absurd idea.

Before we get any further into the details, let's have former general manager Mike Tannenbaum explain it, as he did on ESPN's Get Up! on Wednesday morning...

"Right now, if Carson Wentz was traded as is before he earned a roster bonus, he would count $33.8 million on Philly’s cap next year. However, under the rules, if Carson Wentz wrote a check for $20 million before the end of the 2020 league year, the Eagles will get a credit next year, meaning he would only be $13.8 [million] on their cap in 2021, which is a very reasonable number.

"At the same time, Carson Wentz could go take two visits — presumably it would be to New England and, most importantly, the Indianapolis Colts because Frank Reich's had him before [and] they've had a lot of success. He could take a physical and renegotiate a contract.

"So, if I’m Philadelphia, I have a very manageable dead money number of $13.8 million. I also have the potential of getting two second-round picks for a player that, let’s face it, needs a fresh start, and you still have Jalen Hurts. If I’m the Colts or the Patriots, I now have a young quarterback, 27-years-old, who has played well, and I’ve given up reasonable draft compensation, and I’m paying him a little bit more than I want. But now I have the player I need for the next three years under contract."

That's a lot to take in, but it's not really all that complicated in theory. Wentz pays the Eagles $20 million before the league year ends in March, which would allow the Eagles to carry that over into 2021 and for all intents and purposes lower Wentz's dead cap hit from $34 million to about $14 million. The team then negotiates a trade with potential suitors, including the Pats and Colts. They then trade Wentz for two picks, one of which is conditional, and the quarterback's new team re-works his contract and includes a $20 million signing bonus, giving Wentz back the money he returned to the Eagles.

OK, maybe it's not that simple. Either way, once you try to put a plan like this into practice, it becomes borderline impossible.

Why? Well, for a few reasons, the first of which is that it would require Wentz to pay the team $20 million dollars that he would have no guarantee of recuperating, because he'd have to pay it back before the end of the current league year, before he'd be able to go take that physical in Indy or Foxborough. In essence, Wentz would be doing the team a huge favor — and taking a big gamble — just to get out of town, which would only make sense if he really wants out, and even that previous report stating his desire to do so was dubious at best.

[It's worth noting that Wentz wouldn't have to pay exactly $20 million to the Eagles, it could be less, but the more he pays off the easier that cap hit is to swallow.]

Then there's the question of why the Patriots or Colts or any team for that matter would be willing to pay Wentz a comparable contract, let alone a $20 million payout right when he puts pen to paper. The Eagles quarterback is coming off his worst year as a pro, one in which he was benched for a rookie, and was actually one of the worst quarterbacks in the NFL in 2020. You're telling me those teams would pay two second-round draft picks for the right to pay a struggling quarterback one of the biggest salaries in the league?

On top of that, the Eagles would have little to no leverage in any trade negotiations, as the other teams could simply refuse to play ball on that $20 million signing bonus. Why would they want to pay that money — and two draft picks — when they could just force the Eagles to do it? The picks would be the compensation, why would they also help the Eagles out of salary cap hell while also taking on an additional $20 million charge themselves.

But other than that, it's a perfect plan.

Don't get me wrong, there's plenty of reason for the Eagles to want to try to make something like this work. But there are a lot of moving parts and lot of things that would need to work in the Eagles' favor.

So if you're reading this and going, "Oh, players can pay money back to help a team trade them? I didn't know that." There's probably a reason why — who in their right mind would just give up $20 million dollars in the hope that they can get it back from a new team?

The only answer would be someone at the top of their game, or incredibly full of self-confidence. Right now, after being benched and in the midst of swirling trade rumors, Wentz is neither of those things.

It's a nice thought, and we appreciate Tannenbaum coming up with a creative way for the Eagles to move on from Wentz while improving their already dire cap situation. But we'll have to chalk this one up to wishful thinking.