Week 16 of the NFL season is in the books, and despite the NFC East teams' best efforts to keep the Philadelphia Eagles alive as long as possible, the Birds are finally dead.

Looking forward, there's an argument to be made that the Eagles have the least desirable future in the NFL. In the wake of this disastrous season, the Birds are left with an old, bad, expensive roster, without a definite answer at quarterback, and unless they commit to a complete tear-down of the roster this offseason and start from scratch in 2022, they are going to be in cap hell for the foreseeable future.

How does that compare with the rest of the division?

And how about the rest of the teams that have already been eliminated from playoff contention this year?

And the GM is probably going to keep his job.

RELATED: It's time for the Eagles to blow it up 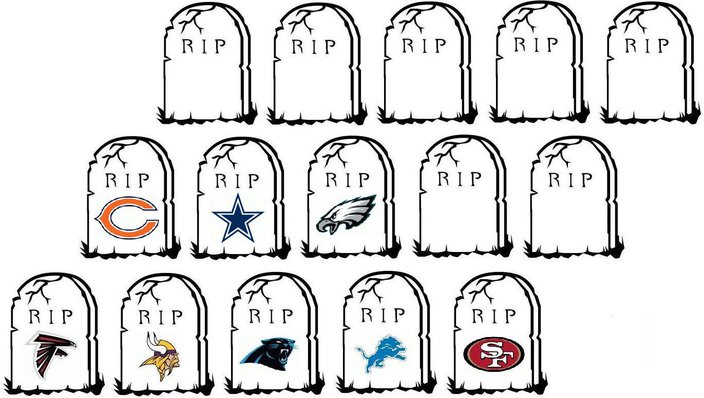 8) Giants (5-10): After the Football Team cut Dwayne Haskins, many in the Giants Twitter community (local media, national media, and fans) asserted that the Giants were right to take Daniel Jones with the sixth overall pick in the 2019 draft instead of Haskins.

I suppose the Giants got heat at the time for liking Jones more than Haskins, but the loudest folks complaining about that weren't exactly great minds.

The real argument wasn't whether Jones was better than Haskins. It was that they took a quarterback unworthy of going sixth overall instead of Josh Allen (the pass rusher, not the quarterback). Allen got hurt his second season, but as a rookie he had 10.5 sacks, 2 FF, and 23 QB hits.

Meanwhile, out of 36 quarterbacks with a qualified number of pass attempts, Jones is 32nd in QB rating, 30th in YPA, he has taken the fourth-most sacks, and he only has 9(!) TD passes this season. That's right. He has 9 TD passes heading into Week 17. That almost seems hard to do.

New York gets a reputation for being a difficult place to play. Nonsense. A few weeks ago they were suggesting Joe Judge should be Coach of the Year when the team was 5-7, and now they're patting the team on the back for landing a second-round talent at QB at sixth overall. In Philly, such takes would be laughed into oblivion.

7) Football Team (6-9): Haskins' release made me wonder how many quarterback changes we have seen in the NFC East this season. By my count... 15!

Anyway, the Football Team might be starting their fourth different quarterback this season in Taylor Heinicke on Sunday. They started three different guys in 2019 (Case Keenum, Dwayne Haskins, and Colt McCoy), and four in 2018 (Alex Smith, Colt McCoy, Mark Sanchez, and Josh Johnson).

6) Cardinals (8-7): Ugh. I really don't want to have to bring a team back from the dead, but I fear I may be doing that with the Bears, who have actually been really good offensively of late. Chicago has scored at least 30 points in each of their last 4 games, and if they beat the Packers on Sunday, they're in.

The Bears, Cardinals, and Rams are all connected heading into Week 17. They are the three teams competing for the two final wildcard spots. The Bears play the Packers at Lambeau (the Packers clinch the 1 seed with a win, so they won't be resting starters), while the Cards and Rams play each other. Here's who gets in with each scenario:

Anyway, should I say something about the Cardinals here? OK. They're average.

5) Rams (9-6): You wanna see Jared Goff pop his thumb back into place, after it was all mangled looking? Cool, here you go:

Jared Goff popped his thumb back in like it was no big deal 👍🥴pic.twitter.com/zCL8d7Unaf

Goff had surgery on his thumb, and he'll be out for the Rams' Week 17 game against the Cardinals. I only knew who the Rams' backup quarterback was because the Eagles played them earlier this season, but in case you don't, it's (drumroll)... John Wolford.

So this could be a fun case study in the importance of having a good backup.

4) Buccaneers (10-5): The Saints have had the NFC South wrapped up for a while now, but if the Bucs win on Sunday they will clinch the 5 seed, and thus, a matchup with the 4 seed, which will be the winner of the NFC East. That's a nice consolation prize.

I feel like some teams would take the opportunity to rest starters if the difference between the 4 seed and the 3 seed were negligible, but I fully expect the Bucs to go all out to win on Sunday, which just hammers home yet again how pathetic the NFC East is.

3) Seahawks (11-4): Through their first eight games of the season, the Seahawks allowed 2,897 passing yards, which put them on pace to shatter the record for most passing yards allowed in a season by almost 1,000 yards.

Ever since, they have allowed the following amount of passing yards in their last seven games:

I guess it helps when you play a bunch of NFC East teams (and the Jets), but they've also been a lot better.

The Saints also got a nice advantage of getting a couple extra days of rest in between their Week 16 and Week 17 games.

1) Packers (12-3): The Packers drafted a quarterback in the first round of the 2020 NFL Draft. How did Aaron Rodgers respond? He is clearly going to be MVP of the league.