In a game where the opponent has everything to play for, the Birds could use Sunday as a chance to continue evaluating their youngsters. 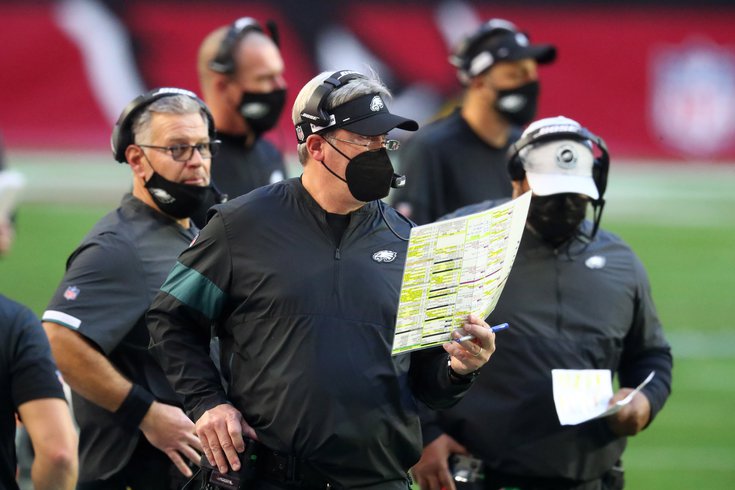 There might not be much left to play for this season for the Philadelphia Eagles — other than a potential spoiler role against Washington on Sunday night and a few spots in the draft order — but it doesn't sound like Doug Pederson is planning on sitting his starters for his team's season finale at the Linc on Sunday.

Of course, some of that might not be up to the head coach, as the team once again suffered a slew of injuries, a common theme for the Birds this year, in their latest loss. And without anything other than pride and potential future contracts on the line in Week 17, it wouldn't make much sense for the team to rush players back when they can just as easily use this game as a final evaluation of some of the younger players on the roster, the guys who were hurt the most by the lack of a preseason and an abbreviated training camp.

Sure, the injuries sustained by the Eagles up and down the roster forced some of these players into action earlier and perhaps more often than the team would have preferred. And while some players rose to the occasion (see: Fulgham, Travis and Mailata, Jordan) others left plenty to be desired. Now would be as good a time as any to get one final look at these players before an offseason of change arrives.

But before that, the Eagles have one more game to play — against the first-place Washington Football Team, who can clinch the NFC East with a win over the Birds — and Pederson doesn't sound like his team will be fully waving the white flag on Sunday night, although it does sound like he's at least aware of the opportunity at hand to evaluate his young players in a game that has very real implications, even if they're not for his team.

"My challenge this week is to keep everyone engaged," Pederson said. "And as far as the young players go, the young players have been playing and we've had a chance to evaluate them here these last couple of weeks, and we're going to continue to do that. But at the same time, we've got some veteran players that need to play, and we're going into this week hopefully to go in there and try to win the game. That's how we play.

"There's a lot of pride in the locker room and I know the veteran guys that are still playing are going to keep things together and help me get that message across."

Still, there are more than a few players in danger of missing the finale with injuries, including one of those young players who has turned some heads in his first year getting real playing time.

Jordan Mailata, who very well may have taken former first-round pick Andre Dillard's starting left tackle job, suffered a concussion when he was hit by Cowboys linebacker Jaylon Smith in the fourth quarter.

Doug Pederson says the team is sending this play to the league office for review. Looked like a dirty hit by Jaylon Smith and Jordan Mailata is in concussion protocol due to it. pic.twitter.com/CWi2iCEOM5 #Eagles #FlyEaglesFly

On Monday, Pederson said he'd be sending the video of that hit to the league offices, but remained unsure if he'd have Mailata back to protect Jalen Hurts' blindside against a tough Washington defense. (Yes, Pederson also announced that Hurts will start Sunday night.)

"We'll take a look at it and send it in, see what happens," Pederson said. "Jordan's in the [concussion] protocol, so that's all I can comment on that. And as far as the hit and all that goes, listen, those are things that happen. You don't want to see that obviously. It looked like a helmet blow type of play. And, again, it's unfortunate that happened. But he's in the protocol and we'll see where he's at each day."

So, it appears the Eagles could have one more offensive line combination left in them this season.

But Mailata was hardly the only Eagles player to leave the game with an injury. Fletcher Cox also left the game when he appeared to re-injure his neck (or at least suffer a similar injury) when he suffered a stinger early on. Perhaps it wasn't a coincidence that the Eagles were leading 14-3 when Cox left the game. Then, their pass rush more or less went silent and the Birds were outscored 34-3 the rest of the way. His status for Sunday remains up in the air, but with nothing left to play for, it's probably more likely than not that Cox gets the day off on Sunday.

Another player who started the game for the Eagles but was sidelined by injury was DeSean Jackson, who was playing in his first game after being activated from IR earlier in the week. On his lone target on Sunday, Jackson scored an 81-yard touchdown capped off by him somersaulting into the end zone. But that would be it for Jackson, as he was limited the rest of the way with what Pederson referred to as a sore foot.

"I don't think he got hurt on that particular play," Pederson said of Jackson's long touchdown and ensuing celebration. "I do know that the foot became more sore as the game wore on, and it just affected him more and more to the point where he couldn't be himself, so we had to keep him out."

Either way, it kept Jackson out most of the game, as he finished with just 20 snaps. And like with Cox's absence causing the pass rush to go silent, once the Eagles' biggest deep threat was sidelined, the Cowboys defense seemed much more capable of stopping Hurts and the offense, who carved them up for 156 yards on their first two drives of them but struggled to finish drives the rest of the day.

So, the Eagles find themselves "nicked up again" as Pederson stated on Monday, but some reinforcements could be on the way. And it's nice to see that some of those players are precisely the type of players that should be playing in the finale (rookies like Shaun Bradley and Davion Taylor, who are in need of real game experience). The only real update the team failed to provide was on Dallas Goedert, who left Sunday's loss with a calf injury and didn't return.

"Derek Barnett (calf), from last week, is pushing through his injury," the Eagles coach said. "It happened at the end of last week, and he's going to push through and see where he's at come game time... Shaun Bradley (stinger) is a little banged up; he's going to be more day-to-day this week. I'm hoping to get Davion Taylor (knee) back — I think we'll get him back this week, Duke Riley (bicep) back. Richard Rodgers (ankle) is doing well, so I anticipate him coming back this week. Again, we'll see where he's at on a daily basis. But we're going to battle through it, we're going to get these guys ready and practiced and prepared for Washington."

"We're Going to Battle Through It" could very well be the title of the 2020 yearbook, not just for the Eagles, but for all of humanity. And like 2020, the Eagles season will be officially coming to an end this week, and we'll all be better for it.