John McMullen: Foreshadowing the price of the Eagles' tanking 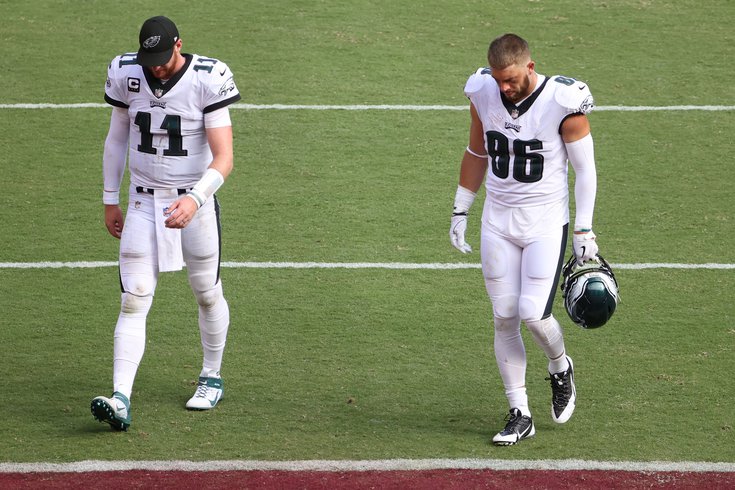 Perhaps no city is better equipped to talk tanking than Philadelphia which has a Ph.D. on a strategy turned dogma, at least for some.

And for that side of the ideological fence, surrendering three spots of draft position for a meaningless Week 17 win against the Washington Football Team during a 4-11-1 season is lunacy.

To others, who give their heart and soul, as well as the occasional broken bone, torn ligament, or hyperextended elbow, playing to purposefully lose is just not on the docket.

Jason Kelce played all 16 games of this dismal season for the Eagles, the final seven after a hyperextended elbow. Over the past six seasons Kelce hasn't missed a game and if anyone deserved a day off with nothing to play for it was Philadelphia's All-Pro center.

Yet the veteran was still out there with Jalen Hurts and Nate Sudfeld. Heck Kelce didn't leave Lincoln Financial Field until 1:10 in the morning when he, Carson Wentz, and Zach Ertz strolled off with team VP of security Dom DiSandro after a lengthy discourse.

It was a poignant moment for three faces of the franchise who may not be back for the 2021 season.

Wentz and Ertz certainly want out, the former due to a fractured relationship with the head coach who benched him and the latter after ironically, a fractured rib or two and a lacerated kidney revealed Ertz cared more about the organization that it did about him. As for Kelce, he could retire after a season with the one thing he enjoys most — the camaraderie of the locker room was largely taken away by COVID-19.

The Eagles most certainly tanked on Sunday night in a 20-14 loss to the new NFC East champions or more correctly stated Doug Pederson did, presumably at the behest of owner Jeffrey Lurie and general manager Howie Roseman.

The cat was out of the bag when Jalen Hurts was replaced by Nate Sudfeld with 12:35 remaining in the game and the Eagles down only a field goal.

Hurts was obviously not playing well at 7-for-20 for 72 yards with an interception and a dismal 25.4 passer rating but the struggle was expected with deep reserve offensive tackles Matt Pryor and Brett Toth trying to block Chase Young and Montez Sweat.

The intangibles Hurts brings to the table each week were on full display as he also had two 6-yard rushing touchdowns and the rookie's ability to run and extend plays was the only way the Eagles were going to generate any offense against Washington's ferocious front.

The pocket dwelling Sudfeld was a sitting duck but Pederson still went to him as was the pre-game plan.

"Nate has worked really hard all year and I think he’s a great player. [Pederson] wanted to give him an opportunity at some point in the game and he was given an opportunity," Hurts admitted. "Obviously, like I said, me being a competitor, I talk about winning all the time and going out there and trying to win all the time. That’s what I’m all about. But like I said, I trust [Pederson] with that. That’s all I can do.”

With the NFL flexing the game to Sunday night Pederson understood some kind of spin had to be unveiled to obfuscate the obvious.

“Yes, I was coaching to win,” the coach claimed.

Pederson also took the brunt of the blame when it came to pulling the plug on Hurts, moving to Sundfeld and by extension the healthy scratch of Wentz, the usual backup.

"Yes, that was my decision solely. Nate has obviously been here for four years and I felt that he deserved an opportunity to get some snaps." Pederson said. "Listen, if there’s [anyone] out there [who] thinks that I was not trying to win the game, Ertz is out there, Brandon Graham is out there, Darius Slay is out there. All our top guys were still on the field at the end.”

Pederson should have also added in Jim Schwartz and his defense who didn't get the tanking memo in what was almost certainly the defensive coordinator's last game with the Eagles.

Despite almost comical attrition on the back end with safety/special teams star Rudy Ford forced into playing outside cornerback, the Eagles defense played well enough to win.

Sudfeld, meanwhile, finished off the game 5-for-12 for 32 yards and an interception with a passer rating even worse than Hurts at 12.5.

The real clue to the tank, however, was Pederson's decision-making which was decidedly non-Pederson-like. He never challenged what looked like a clear fumble in the third quarter, didn't go on fourth down when he typically does, and did when a chip-shot field goal would have tied the game.

Kelce had explained that kind of sentiment last month.

“In football one draft pick isn’t going to make us a Super Bowl champion.”

The symbolism was striking.

The Eagles “earned” three draft spots on Sunday and three foundational pieces of the Super Bowl LII team were left to reminisce about what the franchise once was.