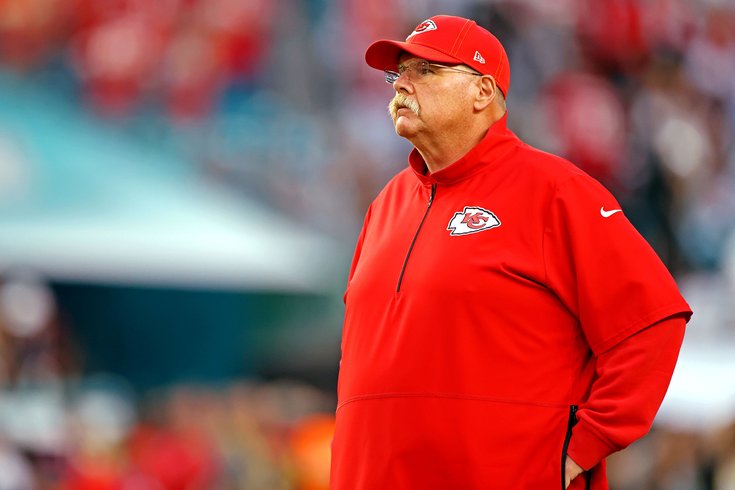 After an incredible third come-from-behind win after trailing by double digits, the Chiefs are Super Bowl champions and so is Reid.

Reid led the Eagles to five NFC Championship games, winning just one, and losing Super Bowl XXXIX. He has 15 playoff wins, the sixth most ever. He used to be the only NFL head coach in the top 10 in that category without a title to his name. Not anymore.

This walk into a winning #SuperBowl locker room is certainly a long-time coming for Andy Reid. #Chiefs #NFL100 pic.twitter.com/J7rTJyNYL9

Though his Chiefs seem to have a flair for the dramatic (they overcame yet another double digit fourth quarter deficit), the monkey off of Reid's shoulders lifts a tremendous burden.

"I loved my time in Philadelphia," Reid said. "Phenomenal players there, we came so close, so many times, my heart went out to the players. It was one thing to hurt the Lurie's and the players. This was a pure team effort."

One can't help but mention that if not for 2017-18 and Doug Pederson leading Philly to the promised land, the reaction in Philadelphia would be very very different. But having beat him to the punch, Eagles nation was happy for Reid Sunday night, and Reid felt the love from the city he used to call home.

"I am happy for them they are a little piece of all of this, and for the Eagles to do what they did a couple years back with Doug, it's a special city, they have some great players it's great to see them still involved with the city, I appreciate it is humbling."

Nothing is more humbling than the reaction from his former players and other parts of Eagles nation.

CONGRATULATIONS COACH REID!! You finally got the hump off of your back. You have been a blessing to so many of us as a Coach yes, but also as a man. You’ve learned & given so much to so many... You Earned it!! LOVE YOU!!! #BigRed #SuperBowlChampion pic.twitter.com/bc1nqJjgJG

So happy for my guy. Well deserved for the @Chiefs. Now give him the credit he deserves. First Class coach, friend & dad. pic.twitter.com/GRGR28FgeV

CONGRATULATIONS to the best coach I’ve ever had the honor of playing for! That man means so much to my family- i can’t even put it into words. #SuperBowlLIV #ChiefsKindgom #AndyReid #BIGRED 🏈

Holy. Cow. Andy is gonna win one. Congrats to him. Really happy for him. pic.twitter.com/zI1kdOF5Jv

So happy for Andy Reid, who deserves every moment of this.

#Eagles owner Jeffrey Lurie told me before the game he’s never rooted so hard for anything non-Eagles in his whole life. His good friend Andy Reid wins a Super Bowl. https://t.co/EV9zTCnEiR