How the Eagles 'helped' the Chiefs win the Super Bowl 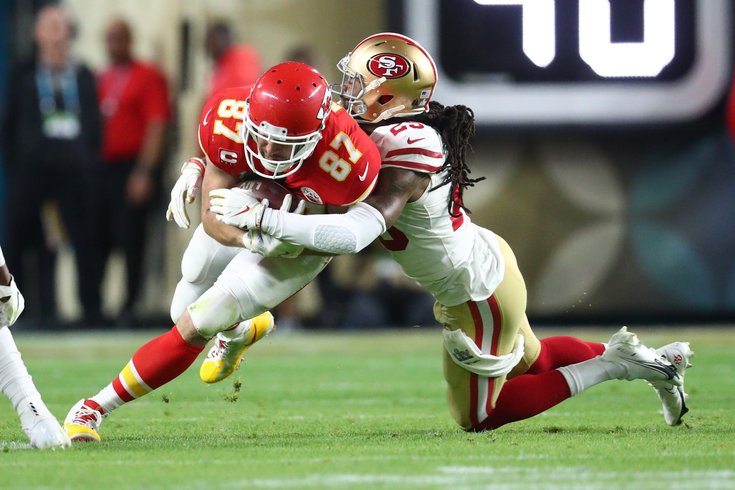 Many in the Delaware Valley are celebrating (mildly, you'd think), Kansas City's first Super Bowl title in 50 years after Kansas City came back yet again to snatch victory from the 49ers 31-20 Sunday night.

Eagles fans can feel like a little sliver of that shiny Lombardi Trophy belongs to them, as it would have been impossible for the 2019-20 Kansas City Chiefs to prevail if not for the contribution from the following Eagles (and Eagles-related things):

It goes without saying that Philadelphia deserves credit for Reid finally winning a Super Bowl. Not only did he appear in five NFC championships and Super Bowl XXXIX — experiences that no doubt prepared him for what he'd face in the playoffs in Kansas City — he's also the latest in a long line of coaches who have won a title in their second stint as an NFL head coach. Bill Belichick, Tom Coughlin, Jon Gruden, Tony Dungy, Pete Carroll and even Vince Lombardi followed that model.

The Eagles ended their relationship with Reid after the 2012 season, giving the coach a chance to get a change of scenery. Two years after the Eagles won a title with Reid protege Doug Pederson (who was an assistant for him in KC before he took over in Philly in 2016), the mentor finally claimed a world championship.

You'll read dozens more stories on Reid in the coming days, but it's pretty safe to say without the Eagles, there'd be no Chiefs Super Bowl win in 2020.

Speaking of Eagles coaches — Pederson quite famously went for it on fourth down in two key situations in Super Bowl LII, the first being the Philly Special touchdown in the red zone and the second a key completion in the fourth to help the Eagles take the lead back late. Sunday, Reid flexed his own "big balls Doug" going for it successfully twice on key fourth downs in the first half, each eventually leading to points.

The #Chiefs join the 2017 Eagles as the only teams since 2000 with multiple 4th-down conversions in a #SuperBowl game.

The Eagles had two 4th-down conversions in their Super Bowl LII win.#SBLIV | #ChiefsKingdom

There was a noticeable uptick in teams going for it on fourth down in the two seasons since Philly won its first Super Bowl, and perhaps that influence helped the Chiefs keep momentum in their first championship in 50 years.

The rest of the staff

Kansas City's offensive coordinator (Eric Bieniemy), defensive coordinator (Steve Spagnuolo), special teams coordinator (Dave Toub), quarterbacks coach (Mike Kafka), wide receivers coach (Greg Lewis), tight ends coach (Tom Melvin), linebackers coach (Britt Reid, Andy's son) and several front office members including the GM (Brett Veach) got extensive experience in positions with the Eagles when Reid was the coach there. It's not a stretch to say that without those trials and tribulations in Philly, paired with the fact that they all build some kind of chemistry with Reid or with eachother in Philadelphia helped them win a world title.

Inactive for Sunday's game, the greatest Eagles' running back of all time announced last week his intention to retire in Philadelphia next season. He was a big boost to Kansas City's offense, toting 101 carries for 465 yards and five total TD. He served as an injury replacement early in the season while also providing veteran leadership for a young running backs room. In Philadelphia McCoy ran for 6,792 yards and 44 touchdowns.

The Eagles decided to let the PA native walk after three seasons in Philly before the 2019 season. Wiz was a key piece of the Birds' Super Bowl team as his versatility and ability to play everywhere on the offensive helped them overcome injuries. In KC, Wisniewski didn't get the start in the big game, but has appeared in 11 this season, starting two.

Jason Kelce was no doubt one of the more memorable participants in the Eagles Super Bowl run, and he was in Miami during the week to give some love and support for his younger brother Travis, star tight end for Kansas City. Here's his advice to his baby bro:

"They really young at the skill positions and I think that you see in the young guys is you see them press. They're so excited to be there they want to make plays and mistakes happen," Jason Kelce said on NFL Network when asked if he gave his brother any advice. "These guys against a great team like San Francisco, do your job, do what got to do in the moment when the ball comes your way, you make a play. You show maturity, have that energy but you, as veteran guy, it's up to you to to go out there and make sure you're bringing these guys along."

The youthful Kansas City offense took its time, but when it mattered they stepped things up. First, midway through the fourth a 43-yard catch by Tyreek Hill set up a Kelce touchdown pass, cutting the once double-digit Niners' lead to 3. Then after a defensive three-and-out, Mahomes found Sammy Watkins for 38 yards to later set up a Damien Williams touchdown catch. Then to add some insurance, Damien Williams scored on a 38-yard scamper to put some icing on the cake.