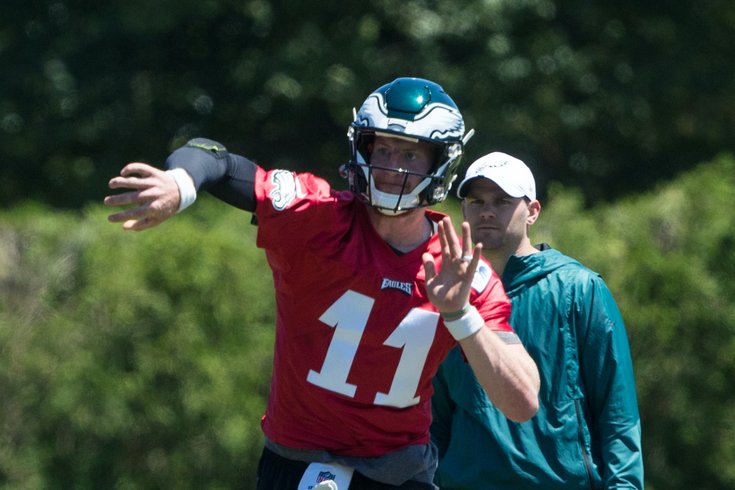 Could the Eagles next offensive coordinator been right under our noses this whole time?

A report came out earlier this week that the Eagles are expected to announce the new hires to fill their four coaching vacancies, the biggest of them being the offensive coordinator job.

The main thought behind the Eagles waiting until after this weekend's Super Bowl could be that the Birds are hoping to interview some assistants from one of the team playing on Sunday, specifically 49ers passing game coordinator Mike LaFleur or running game coordinator Mike McDaniel. Or perhaps, after backing off Chiefs QB coach Mike Kafka because they believed Andy Reid would block the interview request, they try to lure away assistant QB coach Joe Bleymaier?

But in a new report from ESPN's Tim McManus, the Eagles beat writer offers up another, internal name, but not the one many fans are hoping for. According to McManus, the Eagles have interviewed QB coach Press Taylor, while running backs coach Duce Staley, who is a fan favorite and interviewed two years ago before the Eagles promoted Mike Groh to the position, doesn't seem any closer to getting his first OC gig.

Here's more from McManus on Taylor:

According to a league source, Eagles quarterbacks coach Press Taylor has been interviewed during the team's wide-ranging coaching search. The 32-year-old former Tulsa quarterback became a household name locally when he was given credit for digging up the "Philly Special" trick play in front of Super Bowl LII. He was elevated from quality control and assistant quarterbacks coach to QBs coach in 2018.

Taylor has an advocate in Carson Wentz, and that's no small thing. The two have built a strong relationship over the past few years. Trust and respect are key ingredients in the coach/quarterback dynamic, and the Eagles' brass would have few concerns on that front if they tabbed Taylor.  [espn.com]

And herein lies the rub. That pre-existing relationship between Wentz and Taylor, who are only five years apart in age, is a double-edged sword. Yes, the two of them are very close, possibly too close for Taylor to be objective in a coordinator position. It's no secret that Taylor has been easier on Wentz than his tough-love predecessor John DeFilippo. And if there's no internal voice willing to put pressure on the still-developing quarterback, then there's a chance he doesn't fulfill his potential. Given the amount of money the Eagles have invested in Wentz, they should make sure to surround him with the best coaches possible.

Then again, perhaps elevating Taylor to offensive coordinator and hiring someone more in the Flip mold would work. Last week over at Bleeding Green Nation, Matt Harkenreader put forth a plan that included bringing in Jim Caldwell and would at least make some sense for the Eagles, based on how their offensive staff divides their responsibilities.

If Press is truly an up-and-comer, making him OC and Caldwell QB coach makes sense

Caldwell, meanwhile, would work directly with Carson as the “wise elder” that he needs to stay on his game. Putting him at quarterbacks coach would also give Wentz more exposure to him than if Caldwell were the offensive coordinator. And considering how Doug likes to get everyone involved in game planning, Caldwell would still have a voice for his ideas there, the same way John DeFilippo did in 2016 and 2017 (and presumably Press Taylor since then). If you buy in even a little bit that Press is an up-and-comer in this league who just needs to be put in the right position to succeed, this coaching hierarchy actually makes a lot of sense.  [bleedinggreennation.com]

Still, that type of promotion for Taylor would have ripple effects that go beyond the player-coach relationship.

For starters, it's hard to imagine Staley would be thrilled by being passed yet again for a coordinator position that he's likely earned at this point. Then there are the optics. Passing over Duce again — especially if they don't even interview him — when you haven't hired a black coordinator* in over 20 years isn't a great look. Beyond that, another internal hire after all these other candidates basically turned the Eagles down would give the impression from the outside that they're simply settling.

*Todd Bowles served as interim defensive coordinator in 2012 after Juan Castillo was fired.

Of course, there's a way for Pederson to get around this somewhat if he's indeed set on promoting Taylor. The Eagles could simply not have an offensive coordinator, instead going for the system that some other NFL coaches have adopted.

Whatever the Eagles decide to do, it seems like a decision should be made relatively soon. And that's a good thing, considering they have three other coaching hires to make (and a fourth if they promote someone internally). Two of the other jobs — defensive backs (Marquand Manuel) and defensive line (Matt Burke) — are reportedly already filled, but the Eagles still need to find a wide receivers coach in addition to an offensive coordinator.

Stay tuned, next week should be a big one for the Birds as they finally fill out their coaching staff.