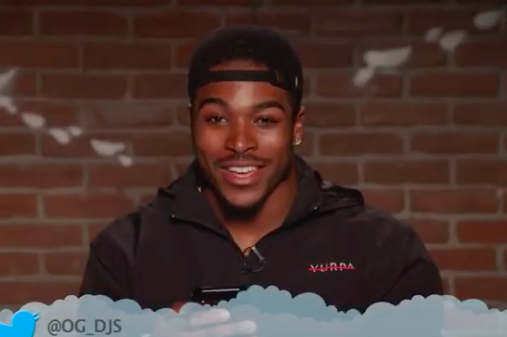 It has been a while since Eagles fans have heard from running back Corey Clement, whose past two seasons have been derailed by injury after a promising rookie campaign.

No one will ever forget Clement's spectacular performance in Super Bowl LII, when he hauled in four catches for 100 yards and toe-tapped a hotly debated touchdown in the back of the end zone.

Clement is a feel-good story for the greater Philadelphia area, having grown up in Glassboro, New Jersey. He's friendly and upbeat in interviews. It's hard to imagine anyone not liking the guy outside of New England, but apparently he has a serious hater out there.

You'd expect to see mainly the biggest names in the NFL, whether it's Tom Brady or Patrick Mahomes, but Kimmel's team chose to slip in a nasty, gratuitous tweet directed at Corey Clement. Watch for yourself.

[Warning: Video contains some NSFW language, specifically from the tweet directed at Clement.]

Really? Why would that person be so mean to Clement?

We decided to dig into this one a little bit and locate the Mean Tweet in question. It's from 2014!

At the time of the tweet, Clement was a sophomore at the University of Wisconsin. He was a backup to current L.A. Chargers running back Melvin Gordon. On the date of this tweet, Wisconsin beat Southern Florida by a score of 27-10. Clement ran the ball 16 times for 77 yards and added a 28-yard reception. Nice game, considering Gordon racked up 181 yards and 2 touchdowns as the primary back.

It appears, based on the history of Moocher Crazy's tweets, that he resides somewhere in Wisconsin. He tweets a lot about the Milwaukee Bucks and Brewers.

Just for fun, we decided to see what Moocher had to say on Feb. 4, 2018, the day Corey Clement and the Eagles won Super Bowl LII.

It’s a great day that @nbc is having to push a narrative that a football game with ridiculous breaks can be as exciting as basketball. It’s not, it won’t be again. #thegreatdownfall

Does he mean that Clement's catch was a "ridiculous break" for the Eagles?