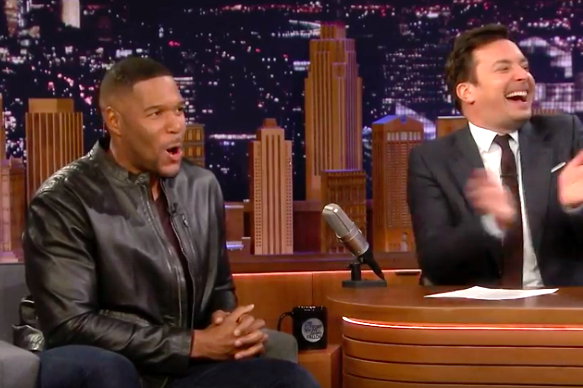 Former New York Giants defensive end appeared on 'The Tonight Show Starring Jimmy Fallon,' where he discussed the death of Kobe Bryant and the upcoming retirement of his jersey number. Strahan poked fun at The Roots, Fallon's house band, for being Philadelphia Eagles fans.

The New York Giants plan to honor both Eli Manning and Michael Strahan by retiring their respective jersey numbers in the near future.

It's a pretty sensible and unsurprising move for the Giants. Strahan, who retired in 2007, won a Super Bowl and continues to hold the NFL's single-season sack record with 22.5 (even if Brett Favre flopped to let it happen). Manning, for all the grief he gets, is a two-time Super Bowl MVP and probable Hall of Famer.

Among all NFC East rivals, Strahan has emerged, along with Tony Romo, as among the most likable in his post-NFL career. He's a jovial daytime TV guy who doubles as an NFL analyst for FOX's studio crew. He's good at what he does and he doesn't show any overwhelming bias toward the Giants.

Then came his appearance on Monday's "The Tonight Show Starring Jimmy Fallon," where he decided to lob an insult at house band and Philadelphia natives The Roots.

.@michaelstrahan celebrates Eli Manning’s retirement and then reveals the @Giants are retiring his jersey #FallonTonight pic.twitter.com/IIMqhbGyNr

After Fallon asked Strahan for his thoughts on the retirement of his No. 92, Strahan had jokes.

"It's going to be really emotional," Strahan said. "And I want to thank The Roots, because I know you Eagles fans wrote in and asked them to retire my jersey — 'cause you didn't want to see it terrorizing your team no more."

Strahan must be enjoying his retirement so much that he missed the Giants going 5-20 against the Eagles ever since then. No wonder The Roots weren't flustered by his remarks.

Jokes aside, Strahan also offered his thoughts about the death of Kobe Bryant on Sunday. Strahan said Bryant had called him personally to ask if he would interview him during the Tribeca Film Festival about his Oscar-winning animated short, "Dear Basketball."

"I've just always thought the world of him, so for him to call me up and ask me to be a part of something that was so special to him, it meant the world to me," Strahan said.

Strahan will be part of Sunday's crew covering Super Bowl LIV between the Kanas City Chiefs and San Francisco 49ers.