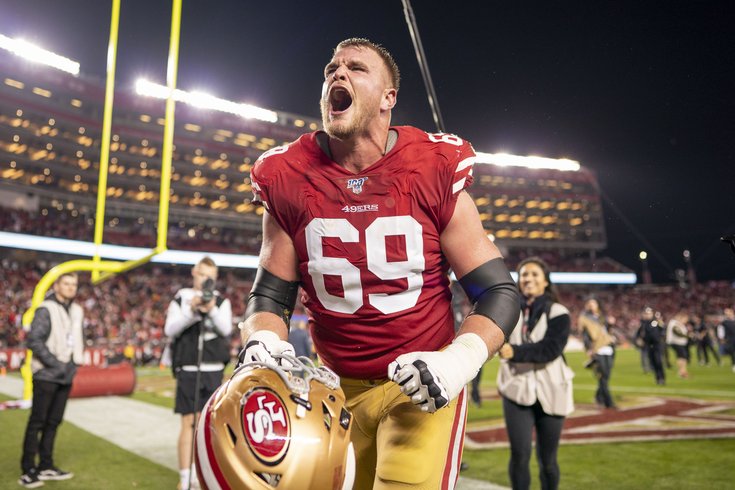 Mike McGlinchey has never won any kind of championship before. He'll appear in Super Bowl LIV this coming weekend.

Mike McGlinchey saw this coming, possibly before anyone. The massive 6-foot-8, 305-pound starting right offensive tackle for the San Francisco 49ers, by way of Notre Dame and Penn Charter, had a feeling it wouldn’t be long before the Niners would transform from the 4-12 team they were last year to 13-3 this year and NFC Champions.

Soon after McGlinchey was taken by San Francisco with the ninth overall pick in the 2018 NFL Draft, the 2013 graduate of Penn Charter, where he played 12 different positions his senior year, predicted the following: “I’m entering a good situation, because I think we’re going to be really good, really fast. I’m not saying we’re going to be in the Super Bowl tomorrow, but we’re heading in a positive direction with what they’re building here and I can see it one day soon.”

“I thought this team could be really special this spring, bringing in Nick Bosa, and signing [former Chiefs’ edge rusher] Dee Ford and [linebacker] Kwon Alexander,” said McGlinchey, who started in 12 of 17 regular-season games for San Francisco, missing five games after undergoing arthroscopic surgery on his right knee in early October to repair his medial collateral ligament. “Our offense continued to get better throughout those times, especially in training camp when it started to build. I think the full belief came in Week 6 when we blew out the Los Angeles Rams.

“That was a dominant win over a really, really good team that had been to the Super Bowl and been a pain in our side the year before. That was a big turning point in our season. We were 4-12 last year, and coming from that, you don’t fully know what you’re fully capable of doing. I say that, because last season, we didn’t think we were a 4-12 team. We knew we were better. We played good football at times last year, but unfortunately we didn’t have a lot of finish to get it done.

“A lot of guys really improved. We got better everywhere, and the belief we have in [Niners’ head coach] Kyle [Shanahan] and in [general manager] John [Lynch], and the strides I personally took, with the special guys we have running this, it’s why everyone plays as hard as they do and why this ship has turned around from being one of the worst teams in the NFL to one of the best.”

Entering his second NFL season, McGlinchey wanted to improve on his overall consistency and returning to “base stuff.”

“I think last year was a little overwhelming at times, and I’m sure what I was doing and how I went about my game-day process and thinking about things that really mattered to me helped,” said McGlinchey, the first cousin of fellow Penn Charter alum and current Atlanta Falcons star quarterback Matt Ryan. “The back end of last year was important. I was healthy, I had a better grasp of the offense.

In his senior year at Penn Charter, McGlinchey played center, both tackle positions, long snapped, played tight end, was positioned as a slot receiver and even played quarterback, once throwing a pass. The only position he didn’t play on offense was guard. Defensively, he lined up inside as a nose tackle, defensive tackle, played defensive end, was positioned as a stand-up linebacker and inside linebacker.

And he played every position with a determined edge that took gratification in knocking down anyone who stood in his way. It’s why he loves the current Niners’ offense, which is an old-fashioned ground-and-pound attack that smashed through the Green Bay Packers for 285 yards rushing and four touchdowns in a dominating 37-20 NFC Championship victory.

San Francisco ran for more yards this season (2,305) than every team in the NFL except for the Baltimore Ravens (3,296). The Niners also ranked first in rushing touchdowns (23) and second in the league in average rushing yards per game (144.1) during the regular season.

McGlinchey credits that to Shanahan’s offense, and to the iron-sharpens-iron theory of going up against Bosa during training camp and in practice throughout the regular season.

This whole thing has been very surreal, and winning the NFC championship was the most fun I ever had playing football... When I was walking off the field, I was thinking, ‘Holy sh*t, I’m going to the Super Bowl.'

“I love it, it’s been fun,” McGlinchey admitted. “Being able to run the football with a defense as dominant as ours is, it allows us to stay in complete control of the game. It’s a great brand of football, especially over these last three weeks. The stats bear it out in the playoffs. We ran the ball 89 times and threw it 27 times. That’s pretty unheard of in today’s game, but it’s an offensive lineman’s dream to have this kind of opportunity. My favorite part of the game is being able to move people off the ball and get going in the run game.

“I have reached a comfort zone. I’ve always believed in myself, and I thought I made great strides in the last half of this year. I like what I’ve put on film, but I still have a lot of clean up. I have great coaches here, and Kyle always puts us in positions to succeed, plus I get to go up against Bosa.

“I went up against him every day in training camp. Nick’s been great. We’ve grown closer as the season has gone on, we talk about different things that work and don’t work. I really like the way he trains and how he focuses on mobility. I’ve adopted some things just by talking to him a little bit about to make myself a little more mobile, and move more efficiently.

“Nick is a special dude and a special player. He’s made me better just by going up against one of the best in the NFL every day. We give each other input and we compete our asses off, and that’s the same with (left tackle) Joe Staley all of the time. It’s a pride thing. It’s really cool how we’ve pushed each other.”

Bosa and McGlinchey will compare notes if one of them has a bad day, asking each other what they saw there and what needs to be done to correct it.

McGlinchey is living in San Francisco and has plans on making it to the Jersey Shore this summer. He plans on talking to Ryan on advice on how to deal with this coming week.

In the meantime, McGlinchey has a big goal. He’s never won a championship. He was never an Inter-Academic League champion in football or basketball at Penn Charter. He never won a national championship at Notre Dame, and the biggest bowl the Irish played in was the Fiesta Bowl while he was there, and Notre Dame lost.

So last Sunday, on the highest playing level, McGlinchey won the biggest prize of his storied athletic career when he walked off Levi’s Stadium as an NFC Champion.

“This whole thing has been very surreal, and winning the NFC championship was the most fun I ever had playing football,” McGlinchey said. “It was an electric day from start to finish. I’m thankful to share it with my teammates and my family. When I was walking off the field, I was thinking, ‘Holy sh*t, I’m going to the Super Bowl.’”