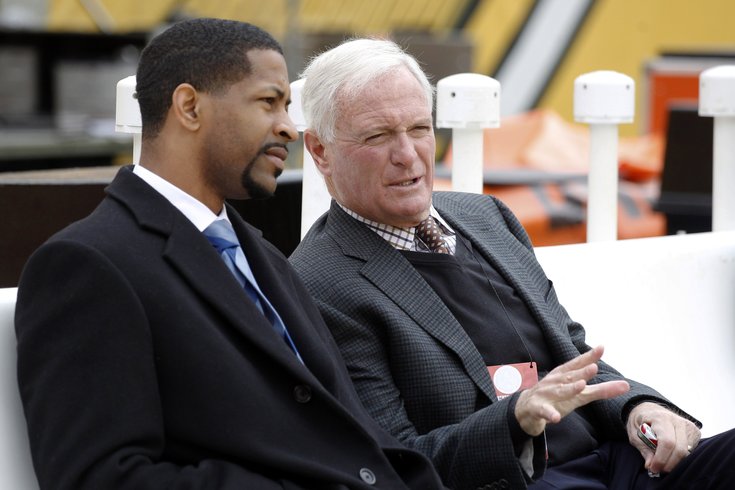 For the second offseason in a row, it appears Howie Roseman will be looking for a new right-hand man.

On Monday, reports surfaced that the Browns had found their new general manager, and it appears he'll be coming from Roseman's staff in Philadelphia, as Cleveland is set to hire Eagles vice president of player personnel Andrew Berry to be their new GM.

#Browns are very close to finalizing a deal with #Eagles VP Andrew Berry to become their GM, a league source told clevelanddotcom

The #Browns have zeroed in on #Eagles VP of Football Operations Andrew Berry as their new GM, sources tell me and @MikeGarafolo. A deal should be done shortly.

News of the Browns' reported interest and ensuing interview request first came out earlier this month.

The hire comes a year after the Eagles lost Joe Douglas, who served in the same position in Philly from 2016 through the 2018 season and ensuing draft, to the New York Jets as their GM.

For Berry, however, this is a move back to familiar territory. Prior to joining the Eagles before last season to replace Douglas, Berry, 32, spent three seasons (2016-18) as Cleveland's VP of player personnel. Before that, he worked as a scout at various levels for the Indianapolis Colts from 2009-15.

While Roseman gets all the ink when it comes to the Eagles personnel decisions, guys like Berry and Douglas play an important role in the decision-making process down at the NovaCare Complex. According to Ian Rapoport of NFL Network, Berry "had his hand in everything from scouting to operations to contracts to strategy" during his time in Philly. Perhaps that's why the Eagles blocked a similar request from the Panthers to interview Berry for VP of player personnel — but they couldn't block him from interviewing in Cleveland, since the job is a promotion.

Now, the Eagles are left with a bit of a void in the front office, one that they'll likely want to fill before free agency and especially the draft. But no matter who they hire, it's getting to the point where you can expect that person's name to come up in GM searches next offseason.