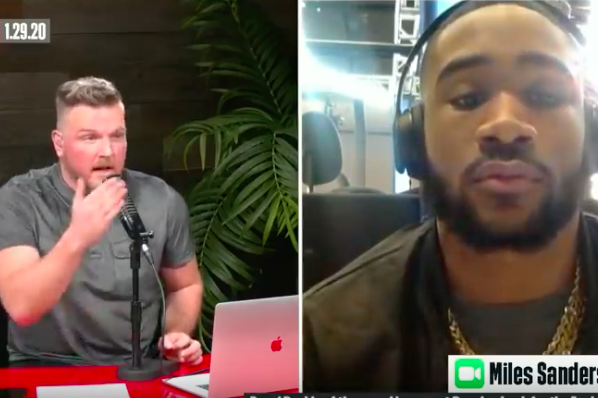 Philadelphia Eagles running back Miles Sanders joined 'The Pat McAfee Show' to talk about his rookie season, Carson Wentz, Saquon Barkley and his mother's support for him.

Philadelphia Eagles running back Miles Sanders will learn on Saturday whether he's been chosen as this season's Offensive Rookie of the Year, a distinction his numbers would certainly support.

On Wednesday, Sanders made an appearance on "The Pat McAfee Show," hosted by the former Indianapolis Colts punter.

McAfee and Sanders discussed the role Barkley played in Sanders' growth, what it would mean to be Rookie of the Year and a variety of other topics. (Pepsi Rookie of the Year, voted by fans, was won Thursday by 49ers defensive end Nick Bosa).

The best part of the interview came when McAfee questioned Sanders about Carson Wentz.

"What's something that's said inside the huddle?" McAfee asked. "I've never been inside of a huddle."

"He'll say, 'Man, let's ball out and have fun, be a playmaker, be a dog,' you know, all that stuff that I like. 'Be a dog.' He'll say that to me every game and that'll just get me ready, you know?" Sanders said. "That's the type of lingo I'm used to and he'll bring it out of me."

"Carson Wentz is from where, North Dakota?" McAfee said.

"Yeah, I don't know how or where he got it from," Sanders said.

Sanders also explained how his mother has been his biggest supporter and motivator on his journey to the NFL. She's even helping manage his finances at this point.

"That's my rock. That's the person I do everything for, man," Sanders said. "She's sacrificed so much for me. I can't even put into words how much I appreciate her."

To win Offensive Rookie of the Year, Sanders will have to beat out some tough competition in Raiders running back Josh Jacobs, Cardinals quarterback Kyler Murray and Titans wide receiver A.J. Brown. Philadelphia is pulling for him to make his mom proud on Saturday night.

The NFL Honors will be presented from Miami at 8 p.m. on FOX.