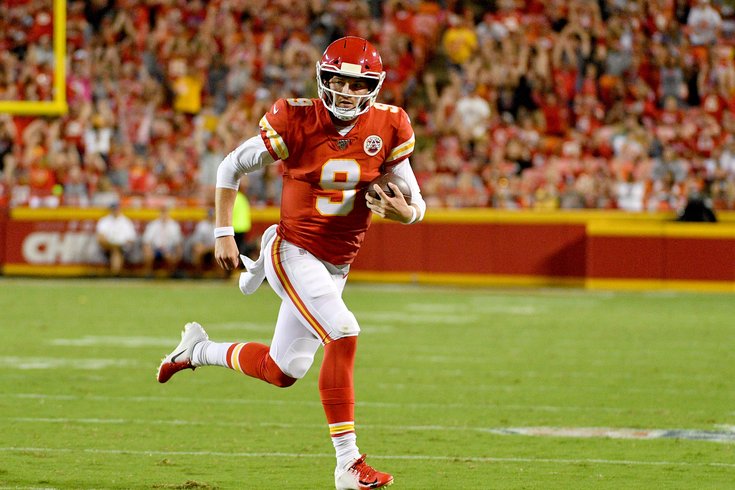 Kansas City Chiefs quarterback Kyle Shurmur runs the ball during the second half of a preseason game against the San Francisco 49ers.

The only time Kyle Shurmur attended a Super Bowl was on Feb. 6, 2005, in Jacksonville, Florida, with his family. It happened to be Super Bowl XXXIX, between the New England Patriots and Andy Reid’s Philadelphia Eagles. Kyle’s dad was the Eagles’ quarterbacks coach at the time, when Kyle was 8 years old.

This Sunday, Kyle is about to attend a Super Bowl in person for the second time — once again courtesy of Andy Reid, as a member of the Kansas City Chiefs. The 6-foot-4, 225-pound undrafted free-agent rookie quarterback and 2015 La Salle College High School grad was on the Chiefs’ practice squad this past season. Kyle, the son of former Giants’ head coach and current Denver Broncos offensive coordinator Pat Shurmur, won’t suit up for Super Bowl LIV, but he’ll be in attendance as a member of the Chiefs in Miami against the NFC Champion San Francisco 49ers.

This is the first time in his life Kyle sat and watched a football season pass by. It was a new experience, though a span of time he’ll embrace, creating a foundation for what could possibly be ahead.

“This has been a learning experience and I’ve been very fortunate to be in a great situation under coach Reid and a great quarterback room with Patrick [Mahomes], Matt [Moore] and Chad [Henne],” said Shurmur, who owns every significant passing record in Vanderbilt history. “I learned a lot from Pat, Matt, Chad and all of the coaches. It’s been a tremendous experience.

“Just being around these guys, and seeing how they see the field, I definitely see things clearer and better by simple tips that they’ve given me. I do see the field better because of it. With coach Reid, he stresses the mental game, your character as a teammate and the physical aspect as well. But I get input from everyone, including coach [Mike] Kafka and coach [Eric] Bieniemy.”

While at Vanderbilt, Shurmur smashed Jay Cutler’s career passing records, becoming the Commodores’ all-time leader in touchdowns (64), passing yards (8,865), completions (723) and passing attempts (1,264), with single-season records in touchdown passes (26) and total touchdowns (29). He became the first Vanderbilt quarterback to register three wins over Tennessee since the 1920s and in his last four regular-season appearances, all against SEC teams, Shurmur was sensational, completing 90-of-123 (73%) for 11 touchdowns and one interception.

While at La Salle, Kyle passed for 4,996 yards and 53 touchdowns for the Explorers while leading the team to a 16-6 record. As a senior, he completed 180 of 307 passes for 2,472 yards and 25 touchdowns, earning PIAA AAAA First Team All-State honors. Shurmur also swam at La Salle, helping the team win the PIAA state title and was a member of state record-setting 200-medley relay, which is interesting to note and a testament to his character.

In 2015, Shurmur won the highly coveted Jim Henry Award by the prestigious Maxwell Club, yet bypassed the national Maxwell dinner that March in Atlantic City, one of the biggest nights of his life, because he gave a commitment to his teammates on the La Salle swimming team. His family was there to pick up the award.

Pat Shurmur coached under Reid for a decade in Philadelphia and quite literally watched Kyle, who’s 23, grow up.

Kyle would often wow the media and the players on those Eagles teams with his arm strength, tossing the ball around in training camp during Pat’s second coaching stint with the Eagles, under Chip Kelly from 2013-15.

When Kyle went undrafted, Reid was the first to call him.

“I just wanted to play, and when I got the call from coach Reid, considering my dad worked for him for all of those years and he did watch me grow up, that was pretty special,” said Shurmur, whose my mom Jennifer and one sister live in Summit N.J., and another sister lives in Philadelphia. “When you go through college, you learn some things, and you adjust protections. When I got to the Chiefs, some of the mental gymnastics pre-snap is expected, but that’s all ramped up a notch.

“Coach Reid allows your personality to come out. He wants that. One of the things that I’ve learned about myself is that I have a lot to improve on. There is a standard that Pat, Matt and Chad have set, and I’m trying to learn and keep up with them.” 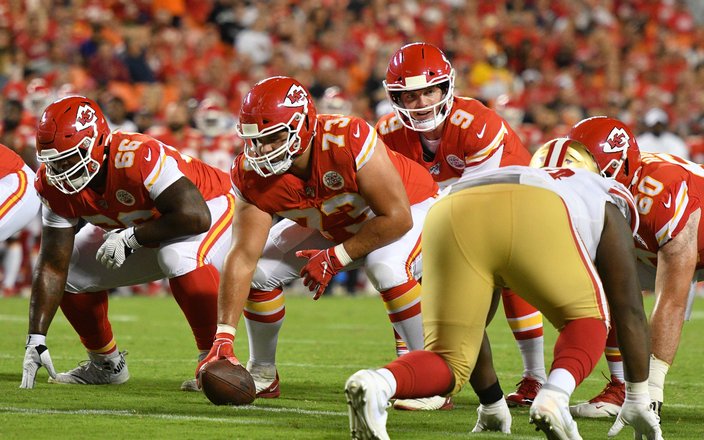 Quarterback Kyle Shurmur at the line during a Kansas City Chiefs' preseason game against the San Francisco 49ers.

Mahomes’ magical improvisation on the field comes as no surprise to Shurmur.

“I see it every day in practice,” said Kyle, who graduated from Vanderbilt with a degree in economics in December. “Pat is amazing. All of the traits you want in a quarterback he has. He’s a great leader, he’s a great teammate, he treats everyone on the team the same and with respect. He can relate to everyone. He’s a special talent.

“But the stuff he does, we’re all numb to it, because that ridiculous stuff he does every day in practice. So, it’s not a surprise when he makes a no-look pass, or he’ll throw a ball left handed. The first time I saw him at OTAs last spring, I saw him practice the no-look pass. Pat’s not only physically gifted, but he’s really, really smart. I can’t believe he’s only a year older than me, and he’s already done so much, and will probably do a lot more.”

As this week’s Super Bowl build-up gains momentum, Shurmur has another significant responsibility aside from getting ready for the game.

“I have about 15-20 tickets to get for family and friends,” said Kyle, laughing. “It’s crazy. My first Super Bowl I was a little kid watching my dad coach the Eagles against the (New England) Patriots in 2005. I’m really fortunate to be a part of a great group of guys, and a great organization in the Chiefs. This is a special team. When we were down 24-0 against the Texans [in the AFC Divisional round], and no one panicked, and no one got down.

“Everyone had the confidence we could make plays and we could get back in this thing. There was no talking. It was about execution. Every day, every week, every player on this team loves coming to work. They’re committed to their craft. I think it’s why this team is where it is. I can’t compare this team to any other team, because it’s the only NFL team I’ve been on. But I can say everyone on this team likes being around each other, and they all like the challenges of being ready mentally and physically.

“Everyone believes in each other.