Report: Eagles expected to announce new coaching hires by end of next week 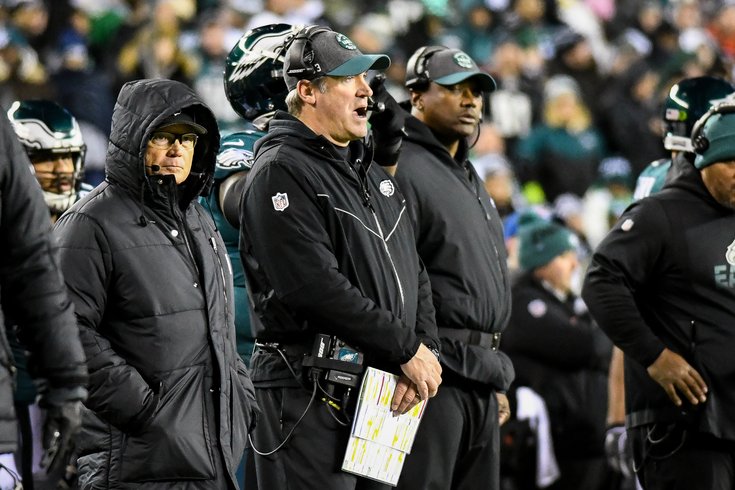 It's been nearly a month since the Eagles' season ended and the team began making changes to its coaching staff. Out are offensive coordinator Mike Groh, wide receivers coach Carson Walch, defensive line coach Phillip Daniels, and defensive backs coach Cory Undlin. The last, Undlin, was the only one to leave on his own terms when he took a promotion to become the Lions' new defensive coordinator.

Who the Eagles will hire to replace those four coaches remains a mystery, however, some clarity could come next week once Sunday's Super Bowl matchup between the Chiefs and 49ers is out of the way, according to a report from NBC Sports Philadelphia's John Clark:

There may be a few interviews after Super Bowl. I’m told Doug Pederson has interviewed many candidates and has taken a very methodical approach to find the best coaches for his staff#Eagles pic.twitter.com/dFwb3WfCZX

There have already been some names reported for the two defensive openings, with Matt Burke rumored to be taking over the defensive line and Marquand Manuel reportedly set to be the next DBs coach.

But what about the two offensive openings, specifically the coordinator spot?

There's been little information coming out about who the Eagles will tap to replace Walch, while the opposite can be said about Groh.

Several names have been floated as potential OC hires, including USC coordinator Graham Harrell, Baltimore's James Urban, Kansas City QB coach Mike Kafka, and even Josh McCown. None of them appear to still be in the running, leaving the list of known OC candidates just as short as the list for WR coach. The first two even interviewed for the job before ultimately deciding to stay with their current teams.

There are the obvious internal candidates like running backs coach Duce Staley or quarterbacks coach Press Taylor, but it's worth pointing out that Clark also mentioned the Eagles could be planning on interviewing some coaching candidates from the teams playing in the Super Bowl. 49ers passing game coordinator Mike LaFleur, who has college experience as an OC and is the younger brother of Packers coach Matt LaFleur, and running game coordinator Mike McDaniel, who has well over a decade of NFL experience in various roles, certainly make sense as guys the Birds should be interested in talking to after this weekend's game.

In fact, both have recently been pointed out as potential replacements for Groh by the Inquirer's Jeff McLane:

LaFleur would, in theory, make more sense than McDaniel. The Eagles have an existing run game coordinator in offensive line coach Jeff Stoutland. But 49ers coordinator roles aren’t clearly defined, and both assistants worked in various posts are they climbed the coaching ladder. Like Reid with the Chiefs, Shanahan would also be likely to block McDaniel and LaFleur.  [inquirer.com]

However, announcing those four new coaches won't be the end of the Eagles' hiring this offseason. They also have at least one front office announcement to make, and possibly another given one former player's appearance at the Senior Bowl. Here's more from Brandon Gowton of Bleeding Green Nation:

The Eagles are also bound to officially announce some front office changes. Nothing too major, I’d presume, but it seems like there’s going to be a role announced for Brent Celek given how he’s been spotted at the Senior Bowl and such. We’ll also see if the Eagles replace former vice president of football operations Andrew Berry, who was hired away to be the new Cleveland Browns’ general manager, in some capacity.  [bleedinggreennation.com]

And for those of you who think this is an awful long time to go without the Eagles announcing some changes, don't worry. As Brandon points out, the team didn't finalize their front office and coaching staff changes until near the end of February last year.

If this report proves to be true, they'll beat that by a decent margin this year.