Report: Eagles players had to be restrained on sideline after Pederson benched Hurts 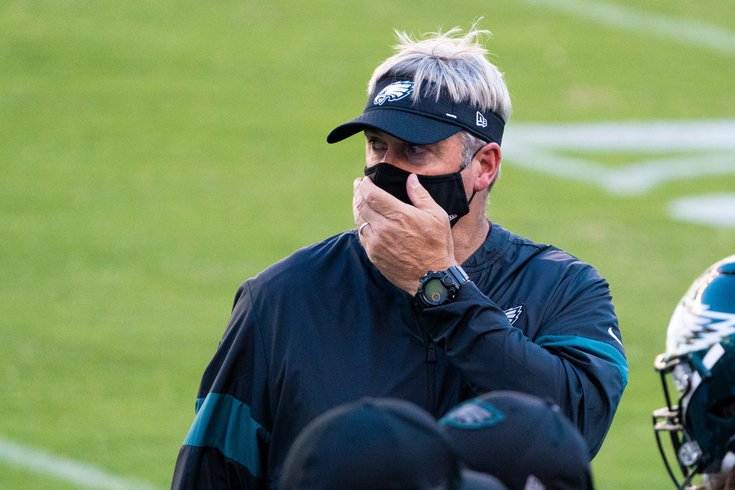 Apparently, members of the New York Giants and their fans weren't the only ones furious at the Eagles' decision to play Nate Sudfeld over Jalen Hurts in the fourth quarter of their regular season finale. And no, we're not talking about faction the Eagles fans who have voiced their frustration over what appeared to be Doug Pederson waving a big ol' white flag on national television with the entire football world watching.

According to The Inquirer's Jeff McLane, several members of the team, both players and coaches, were not only surprised, but they were "shocked and outraged." Some were "angry," so much so that two defensive players had to be restrained from approaching the head coach on the sideline. Two offensive starters, including Jason Kelce, who just last week offered a passionate anti-tanking plea, did reportedly get to Pederson however, and asked him why he pulled the starting quarterback late in a three-point game.

Kelce, as McLane notes, did not talk to the media on Monday following the 20-14 loss that moved the Eagles to 4-11-1 for the season and has yet to speak publicly.

None of this was visible on the broadcast, but there was a moment when Hurts appeared to be confused by the decision his head coach was making. Here's more from McLane:

Hurts was distraught, as well. Even though he had been told Wednesday that there was a chance Sudfeld could play, he couldn’t understand why Pederson would make the switch, sources close to the situation said.

The NBC broadcast caught Hurts on the bench after he was replaced apparently saying, “That’s not right.”  [inquirer.com]

Sudfeld's play certainly didn't help, as he turned the ball over on each of his first two drives. According to McLane, many of the players knew their only chance at coming back was with Hurts on the field, which, sure, it's nice to see the players have confidence in the rookie, even with a backup unit around him. But it also shows just how obvious the decision to tank was, even if Pederson denied it after the game, saying that he entered the week with a plan to give Sudfeld some time in the regular season finale.

"Yes, I was coaching to win. Yes, that was my decision, solely," Pederson said when asked if he was told by owner Jeffrey Lurie or GM Howie Roseman to make the switch. "Nate has obviously been here for four years and I felt that he deserved an opportunity to get some snaps. Listen, if there's anyone out there that thinks that I'm not trying to win the game – [Zach] Ertz is out there, Brandon Graham is out there, Darius Slay is out there. All our top guys are still on the field at the end. So, we were going to win the game."

He has a point there, but none of those guys play quarterback. And the drop-off from Hurts to Sudfeld was glaring, even on a night where Hurts was hardly at his best throwing the football.

On Monday, Pederson doubled down on that claim, insisting that the team still had a chance to pull off the comeback with Sudfeld under center. He also made sure to point out on Monday just how poorly the offense was playing before Hurts was taken out.

"Our offensive struggles have not been about one position group or one guy or whatever," Pederson said. "It's been a multitude of issues that we've had, and again, last night in that game, we were in a situation where we failed to score as an offense. We failed to score there at the end of the third quarter. We were struggling just a little bit to move the ball. Defensively, they kept us in the game with a couple of takeaways late.

"And my plan was to get Nate [Sudfeld] in the game. Nate's a guy that's very capable of running our system and executing, and an opportunity to pull that game out last night."

The problem is, it appears some of those who work with Pederson disagree. Furthermore, some didn't even realize there was a plan in place to play Sudfeld for an extended period of time (which is a little harder to believe considering people outside the building knew before kickoff that Sudfeld was going to see time, and the pure fact that the Eagles were sitting several starters telegraphed the impending tank). Here's more from McLane:

Some Eagles staffers still weren’t sure what was behind Pederson’s decision a day later, if he was under orders from owner Jeffrey Lurie and/or general manager Howie Roseman, although most speculated that it was most likely related to draft position. The Eagles will have the No. 6 overall draft pick, rather than the No. 9 pick had they won.

Some speculated that most wouldn’t have cared had Pederson communicated his plans to the team, or publicly stated his intention to treat the finale like a preseason game and insert Sudfeld at some point. [inquirer.com]

If Pederson was actually coaching to win the game, then pulling Hurts would have only made sense if the Eagles were down big and had little to no chance of coming back. And maybe by sitting most of his other starters — you know, like one does when trying to win — Pederson expected that to be the case by the time the fourth quarter rolled around.

It wasn't, and Pederson still opted to sit his second-round pick in place of a pending free agent third-string quarterback. Sure, it pissed some people off — from his own players and assistants to those on rival teams — but it appears to have gotten the desired result, as the Eagles will be picking three spots higher than they would've had they won the game.

Was it worth it? We'll find out in April.

UPDATE [1:09 p.m.] — It appears as though there is some truth to McLane's report that members of the team were surprised by Pederson's decision.

Miles Sanders on @SportsRadioWIP on Jalen Hurts sitting" "Man if I'm being honest, nobody liked the decision, nobody. That's all I can say really. I don't know who was the main person behind that decision. All I know is that a lot of people on the team was confused." #Eagles

That being said, they shouldn't have been. The team was already sitting several healthy starters — including the one who just said he was confused by the move to pull Hurts — and there were several reports out there indicating that Sudfeld would see time. Furthermore, Jalen Hurts himself admitted after the game on Monday that he knew this was part of the plan.

“Nate [Sudfeld] has worked really hard all year and I think he’s a great player," Hurts said. "[Pederson] wanted to give him an opportunity at some point in the game and he was given an opportunity. Obviously, like I said, me being a competitor, I talk about winning all the time and going out there and trying to win all the time. That’s what I’m all about. But like I said, I trust [Pederson] with that. That’s all I can do.”

On Monday, Eagles defensive leader Brandon Graham also admitted that he was aware of the plan to play Sudfeld at some point.

Perhaps the biggest story here isn't that players were upset over the decision, but rather that it wasn't communicated to everyone and that players feel safe openly questioning their coach.

UPDATE [Wednesday, 9:19 a.m.] — Jason Kelce has spoken, and seemed to downplay what happened on Sunday night.

Jason Kelce clears some air on the events that unfolded Sunday night with Hurts being benched in favor of Nate Sudfeld. pic.twitter.com/tuUZgk8pCv