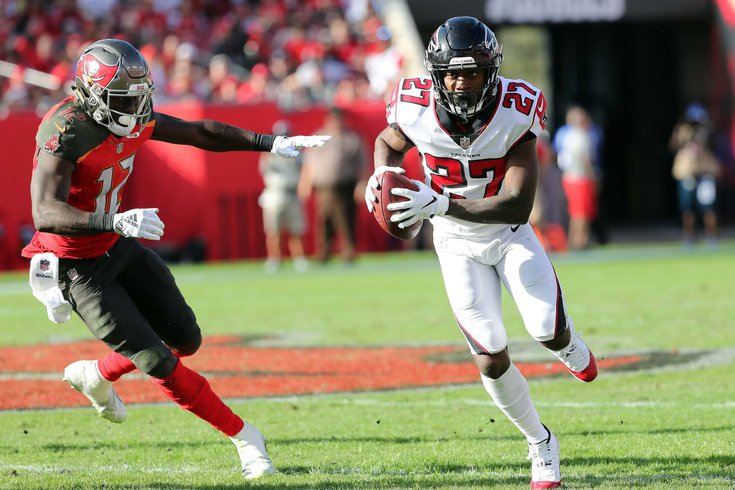 Here are three free agents that I believe make sense for the Eagles in free agency this offseason. Yes, I'm aware they're underwhelming.

In college, Kazee was a ballhawk, picking off 15 passes in his final two season at San Diego State, while playing corner. His ability to take the football away carried over into the NFL, as he tied for the league lead in interceptions in his first full season as a starter in 2018, with seven, while playing safety. He followed up that season by picking off three more passes in 2019.

So what's wrong with Kazee that the Eagles could potentially afford him?

Assuming a best-case scenario, a nine-month recovery period would have Kazee ready to play again in July, in time for training camp. He would make sense as a replacement for Rodney McLeod, who is recovering from his second ACL tear in three years, and who could end up starting the 2021 season on the PUP list.

Conley is probably best known for having his stock fall drastically just prior to the 2017 NFL Draft after he was accused of sexual assault. (A grand jury later ruled not to charge him, and he even took a polygraph test for teams prior to the draft.)

In Oakland, Conley was a disappointment overall, but he flashed NFL talent, and was the Raiders' No. 1 CB heading into the 2019 season. After six games in 2019, the Raiders traded him to the Texans for a third-round pick. It should be noted that Jon Gruden didn't seem to have much use for any of the four Raiders' first-round picks prior to his arrival, as Khalil Mack, Amari Cooper, Karl Joseph, and Conley are no longer on the team.

In Houston, Conley had a solid season in 2019, and he got his hands on a lot of passes. Including the playoffs, he had 14 PBUs in nine games. Here were some of those pass breakups:

In 2020, Conley was poised to start for the Texans once again, but he had a pair of surgeries on his ankle, and missed the entire season. Obviously, that is why he could be a cheap option for the Eagles, who are in need of a starter on the outside opposite Darius Slay.

Arnold entered the NFL in 2017 as an undrafted wide receiver, but the Saints eventually converted to him to tight end. He got waived during the 2019 season, and was picked up by the Cardinals. In his fourth year, Arnold had something of a breakout season, catching 31 passes for 438 yards and 4 TDs. He caught 68.9 percent of the passes that came his way last season, and had an impressive 9.7 yards per target.

Arnold is a threat in the red zone:

And he can also get behind the defense if you cover him with a linebacker:

On the downside, he's only 220 pounds, and he's not going to give you much as a run blocker. He also had some bad moments in big spots, notably a bad fumble in the Cardinals' Week 16 loss to the 49ers.

Still, the Eagles seem to be taking on a number of tight end projects lately, like Hakeem Butler and Tyree Jackson. Why not add a guy who should be reasonably cheap, has already successfully made that conversion, and still has some ceiling to explore?

With Zach Ertz almost certainly moving on, the Eagles could use a No. 2 pass-catching tight end to complement Dallas Goedert.