What they're saying: Eagles, Wentz or other teams — who has the leverage?

Plus, the $10 million 'elephant in the room' and some free agent options for Philly 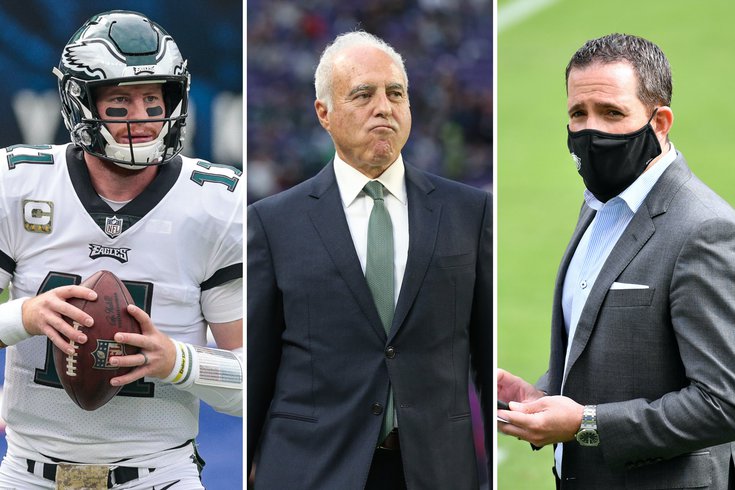 Another day, another round of Carson Wentz rumors.

Tuesday's big news came from Sports Illustrated's Albert Breer, who reported that the Bears have put forth the best offer for the Eagles quarterback and have been the most aggressive suitor. He also reported that Wentz would prefer a deal to the Colts, and that desire could be the biggest thing holding up a potential deal between the Philly and Chicago.

The Eagles want more than the Colts are reportedly offering (two second round picks). It appears the Bears are willing to pay that price, but not if Wentz will be unhappy in their locker room (especially when they'll be tied to him for two years at north of $47 million). And the Colts don't see any reason for them to offer more given Wentz's desire to play there and the fact that if the Bears back out, they're the only real suitor left anyway. It's essentially a giant game of three-way chicken and no one wants to blink.

The biggest question, though, is which party has the most leverage? The Eagles? Carson Wentz? The Bears? The Colts?

On Monday, we wrote about how whatever leverage Howie Roseman and the Eagles currently have is finite — and on a timer, one that will run out on March 19 and possibly sooner. Unless, of course, Jeffrey Lurie is willing to pay considerably more than the $34 million they're already on the hook for just to ensure Wentz is playing elsewhere next season.

That would be quite a damning indictment of the 28-year-old quarterback — and the possibility of the Eagles trading Wentz after paying him that $10 million roster bonus due in mid-March and still trying to trade him should be enough to cause other teams to question what they would be getting themselves into by trading for him.

That's where we'll start today's edition of What They're Saying. For those of you sick and tired of all the Wentz coverage, we promise that if you stick around until the end, there will be some free agency talk that has nothing — well, almost nothing — to do with the Eagles quarterback. Let's dive in...

The 'elephant in the room'

No, we're not talking about Babar. We're talking about the aforementioned $10 million roster bonus that Wentz is due on March 19. While the Eagles paying that seems impossible, CBS Sports' Jason La Canfora thinks the Birds might be willing to take that hit if it helps them get the return they're seeking for Wentz.

The game of chicken being played between the Eagles, Colts and Bears over Carson Wentz was never particularly close to being resolved, despite what so many breathlessly reported around the Super Bowl, and his $10M roster bonus due next month remains an elephant in the room. The Eagles paid Sam Bradford a huge chunk of money not that long ago and then dealt him anyway, to the Vikings, for a first-round pick. Some believe ownership might be willing to – or ultimately may simply have to – swallow that kind of hit again to facilitate getting max compensation for what amounts to Philly's backup QB at this point. Tough pill and one that won't go down easy, but I don't see the type of offers going their way increasing much unless that financial burden is born by the Eagles. There are a ton of options out there including the draft, and a very limited market for Wentz. This was never close, was always going to be tricky and while I expect Wentz is gone in the coming weeks, this was never going to be smooth.  [cbssports.com]

An 'illusionary market' for Wentz

Another thing we talked about on Monday was the idea that the trade rumors swirling about Wentz have been largely team-manufactured, meaning they've been coming from Roseman. That's how Mike Lombardi sees it as well, via his recent appearance on The Pat McAfee Show.

But unlike La Canfora, he thinks that March 19 deadline is going to cause the Eagles to suddenly spring into action and make a move. Anything else in the meantime is just posturing, according to the former GM...

“When you go to Japan, they don’t typically negotiate with you to do contracts until you’re probably two hours away from leaving for the airport,” Lombardi said. “The reason that is because that’s really the only time you’re serious when you’ve got to leave. Everything else is just posturing. The Eagles are posturing, right? They’re posturing.” ...

Lombardi said another impetus to get a deal done quickly is to avoid paying Wentz a $10 million roster bonus on the third day of the league year, something the team would not like to pay if they are looking to trade him. Lombardi said the roster bonus had created a de facto trade deadline.

“They’ve tried to create this illusionary market out there,” Lombardi said. “They’ve taken billboards out with the Worldwide Leader, and they’ve done everything they possibly can to create this market that has become flat. Two weeks ago, he was supposed to get traded for a blockbuster, and that has not happened. Most teams are looking around, saying, ‘We’re not in it.’ The Eagles at some point will realize two days before that roster bonus is due is either make this deal, or it ain’t worth paying $10 million.”  [nj.com]

Who is in charge here?

So, who is in the driver's seat? According to Dave Zangaro, the Eagles will have the final trump card (which makes sense because as long as there are suitors, they can trade Wentz if they're willing to take whatever is being offered). But in the interim, all the parties will be jockeying to position themselves in the best place to win this potential trade.

So it’s clear that Wentz has some leverage. And if the offers from the two teams were close, he’d probably be able to steer it in one direction over the other.

The problem here is that it seems like the Bears are really leading the charge right now. And the Eagles have some leverage left too. While I don’t think it would be a good situation to hold on to Wentz and wait, they technically can do it.

If Howie Roseman can’t get the Colts to increase their offer and he determines that whatever the Bears have presented to them is the best they’re going to get, he can play the Eagles’ last card: “Hey, Carson, it’s either Chicago or come back here.”

Right now, this feels like this has turned into a giant game of chicken between the Eagles, Bears, Colts and now Wentz himself.  [nbcsports.com]

Another reference to a giant game of chicken. Unfortunately, I've already used the Office GIF in the intro. Instead, I'll share this related (and even better) Office reference made by Jimmy Kempski on Twitter earlier on Tuesday.

Carson on his next team: https://t.co/RbazqWyalt

MORE: Shander: Just get the Wentz trade over with so we can take a season off | Roseman appears to be at a crossroads in the Wentz negotiations

OK, we're starting to move away from the Wentz rumors now, which is uncharted territory in 2021 — but we're not yet completely free of his shadow.

Over at Inquirer.com, Mike Sielski wrote about why tight end Zach Ertz deserves a better ending to his Eagles career than being a throw-in piece in a Wentz trade, which is something that's been rumored in recent days. And, you know what, we agree with him.

Unfortunately, dealing Ertz along with Wentz is one of the ways Roseman can increase the return, and football is a cold business if anything.

The National Football League can be a pretty cold place, and it can get cold quickly, even for a player who has scored the only Super Bowl-winning touchdown in a team’s 87-year history, who has caught more passes than every player except one in that team’s 87-year history, who spent several minutes on a Zoom call last month fighting back tears over the prospect that he will no longer play for that team.

Here’s how cold: Zach Ertz has been reduced to a potential throw-in, according to multiple reports, most prominently from ESPN, in a potential Carson Wentz trade. A sweetener to entice a franchise to take Wentz and his unwieldy contract off the Eagles’ hands. A footnote in a bigger, broader story.

Here’s how quickly: As recently as 2019, Ertz caught 88 passes for the Eagles, the second-highest total in his eight years with them, and scored six touchdowns. Before last season, he hadn’t caught fewer than 74 in a season since 2014. The notion that he would someday be the franchise’s all-time leader in receptions seemed a fait accompli. The notion that he would someday be inducted into the Pro Football Hall of Fame, while hardly guaranteed, seemed a reasonable and worthwhile discussion topic. [...]

There can be a tendency to speak or write about a football player whose career might soon be ending in the tone of a eulogy or an obituary. This isn’t necessarily such an occasion for Ertz. Whether the Eagles trade him or release him, the chances are good that he will play elsewhere. But when he lingered on the Lincoln Financial Field sideline after the Eagles’ season-ending loss to Washington and when he conducted that tearful Zoom call with the media, it suggested that he has reconciled himself intellectually, if not emotionally, to his departure from the Eagles and Philadelphia.  [inquirer.com]

Thank you for sticking around to the end. As promised, here's a free agency blurb courtesy of NJ.com's Mike Kaye, who took a look at five players with ties to Nick Sirianni's new coaching staff that the Eagles could target next month when free agency opens.

Naturally, one of them was a quarterback, but in this case he would make a lot of sense as a veteran presence behind Jalen Hurts (assuming Wentz is traded). The other would be an interesting running back option to pair alongside Miles Sanders, especially if he's healthy and the Eagles are still set on not giving Sanders a full workload.

The Eagles showed interest in Taylor during the 2019 offseason before he signed with the Los Angeles Chargers. During his time in LA, he worked under Steichen, who utilized him as both a backup and a starter. With Carson Wentz likely to join Ertz out the door, the Eagles could use a veteran backup behind Jalen Hurts. Taylor is the most logical backup QB option on the market for the Eagles.

Mack is coming off a lost season in Indianapolis due to an Achilles injury. Sirianni wore Mack’s No. 25 decal on his visor throughout last season, as the two became close during their three years together in Indianapolis. While Singleton didn’t work with Sirianni, he was Mack’s first RBs coach with the Colts in 2017. With two familiar faces in the building, perhaps Mack would be willing to tandem with Miles Sanders in a comeback year.  [nj.com]

MORE: McMullen: The Eagles have to figure out what to do at quarterback again | NFL trade rumors: Eagles have reportedly spoken to Colts, Seahawks about Zach Ertz