And, while a package with Wentz seems unlikely, they could pair him with Andre Dillard in a deal 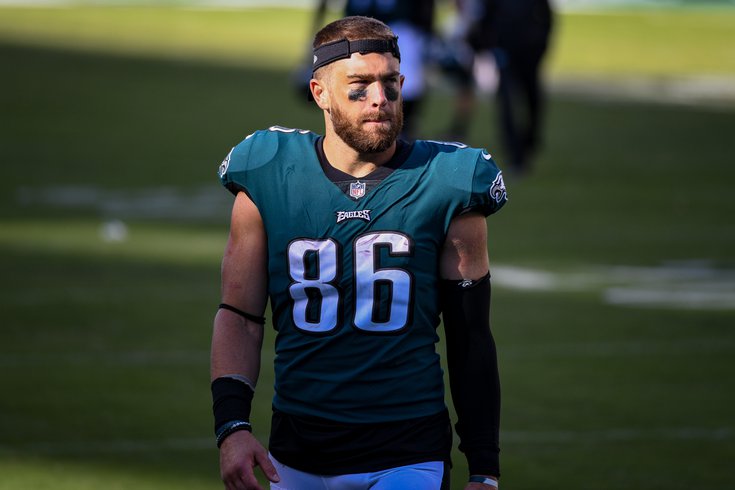 While all the attention has rightly been on a potential trade involving Eagles quarterback Carson Wentz, it appears one of the QB's favorite targets, tight end Zach Ertz, is also getting shopped this offseason.

On Saturday, ESPN's Jeremy Fowler reported what many had already begun speculating: that the Eagles would look to move on from Ertz, who has one year left on his contract, this offseason in an attempt to save some money against a cap they're already well over. He even went as for as to suggest they package Ertz and Wentz together.

As the Carson Wentz trade saga continues, some people around the league also expect the Eagles to explore options with Zach Ertz, who is bracing for a change of scenery via release or trade, per source. Perhaps Philly could include him in a Wentz trade package to maximize value

As it turns out, the Eagles have been exploring those options for months, and have reportedly engaged in trade conversations with two teams, according to SI.com's Ed Kracz. Here's more:

An NFL source said that the Eagles have had conversations about Ertz with the Seattle Seahawks and Indianapolis Colts.

Prior to last season’s trade deadline, the Eagles had offers from the Baltimore Ravens and Green Bay Packers, but Ertz suffered a high ankle sprain and landed on Injured Reserve, virtually assuring he would finish his eighth season in Philly.  [si.com]

Both of those teams are interesting, as Seattle largely only makes sense as a destination for Ertz if the team smooths things over with quarterback Russell Wilson, who has reportedly recently become upset with the direction of the franchise and would like to have more say in personnel decisions. Maybe bringing in a reliable tight end like Ertz would be a step in the right direction.

It's the other team, however, that is the much more intriguing option, especially as trade rumors swirl linking the Colts to Wentz as the most likely trade destination for the Eagles quarterback. Fowler mentioned in his tweet the possibility of packaging Wentz and Ertz together in a trade, which would keep the duo together and could sweeten the pot for the Eagles as they hope to get something better (read: a first-round pick) than what they're currently being offered for Wentz.

However, that could be tricky considering what that would cost the acquiring team (Colts or otherwise) against the cap. Not only would they be on the hook for $25.4 million of Wentz's contract in 2021 (plus an additional $22 million in 2022), but they'd also have to have room for the $8.5 million they'd assume for also landing Ertz. Currently, the Colts are projected to have just over $69 million in cap space, according to OverTheCap.com, so theoretically, they'd have the room to make it work.

But if the two are indeed dealt separately, Kracz still believes that "Wentz will be the first domino to fall."

There was one more interesting nugget in Kracz's story. While he thinks that a Wentz-Ertz deal is unlikely, he mentions another potential package deal that he thinks could help the return for Ertz — but it would require giving up on a recent first-round pick.

As interesting as an Ertz-Wentz deal to Indy would be, and one that Indy could afford since they have plenty of money below the expected salary cap of about $180 million, what about an Ertz-Andre Dillard deal to the Colts, who need a tackle to replace the retiring Anthony Castonzo?

Dillard is expected to battle Jordan Mailata to be the left tackle, but Mailata has proven he can do the job more than adequately.

If Ertz is traded straight up to any team, the compensation coming back won’t be overwhelming. A fourth-round pick may be as good as it could potentially get.  [si.com]

[Shoutout to Jimmy Kempski, as always, for helping me with the salary cap info.]