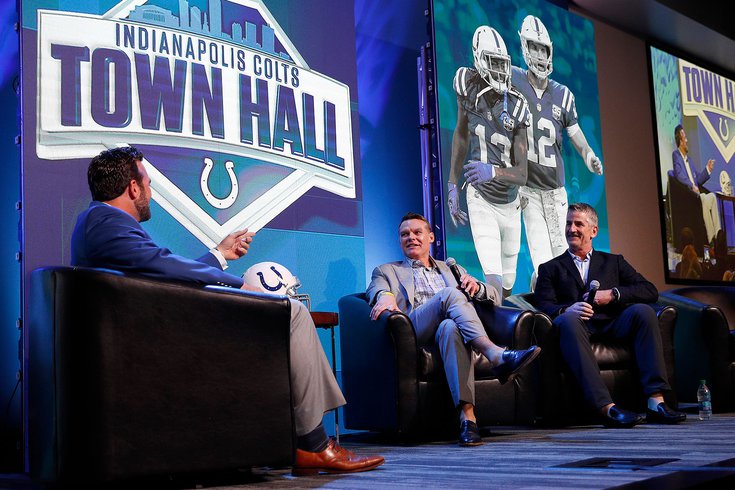 Question from pricebe: If you were the GM, would you prefer a first this year or next year in a Carson Wentz trade?

I'm not so sure they'll even get a first, but if they do, I would prefer it be in 2022 if I were Howie Roseman. The Bears hold the 20th pick in this draft. The Colts hold the 21st pick.

A look at the last five times the Eagles made a pick somewhere in the 20’s:

The Eagles have a multi-year rebuild ahead of them, and as such, it shouldn’t matter whether they have an extra first-round pick in 2021 or 2022. I’d much rather roll the dice and hope for a higher pick in 2022 than the ones the Bears and Colts currently have in the early 20’s in 2021.

And seeing as whoever you trade with would be rolling with the worst starting quarterback in the NFL a year ago (statistically), I’d like my chances of that 2022 pick being better than 20th or 21st.

Question from Wentz Outz: Do the Eagles pretty much have to have a running QB, with their O-line?

During the Super Bowl, I kept seeing people on Twitter talk themselves into some absurd notion that Patrick Mahomes would have looked like Carson Wentz this season if he played for the Eagles behind their offensive line in 2020. Which... just... lol. So I tweeted this:

No, this game is not a lesson in why Carson Wentz stunk this season.

Those who disagreed pointed to the OL being some sort of disaster. Except it really wasn't that bad, so I replied this:

And, well, that tweet got ratio'd, as the kids say. Read the replies, lol.

Anyway, the Eagles' O-line has been a perennial top 5 unit for like the last half decade. Certainly, it was not that in 2020, or anything close, with injuries being the primary reason why. Jason Peters' play declined significantly at LT, and there were times when a few guys who shouldn't even be in the NFL had to start at guard, like Jamon Brown, or Sua Opeta. And there were four games in which Matt Pryor had to start at RT. Hell, the Eagles started 14 different OL combinations in 2020. Oh, and Eagles quarterbacks got sacked 65 times, most in the NFL.

So, I get it. All of the above makes for a pretty compelling case that the OL stunk.

Except it really wasn't that bad, compared with the rest of the NFL. PFF had them ranked 19th, which isn't great, of course, but it's close to the league average. ESPN's analytics, meanwhile, had the Eagles' offensive line as the 11th best in "team pass block win rate." They also ranked second-best in "run block win rate." Those are obviously very good rankings.

On the eye test, they got good play from Jason Kelce, Lane Johnson (when healthy), Isaac Seumalo, Jordan Mailata (later in the season), Nate Herbig, and Jack Driscoll.

At midseason, I took a look at all the sacks the Eagles allowed in the first half of the season. At the time, they led the league with 32 sacks allowed, and they ended up roughly staying on that pace the rest of the season. What I saw during that exercise was that Carson Wentz and the Eagles' offensive scheme were more culpable for that high sack total than the line. In fact, I placed blame at the time on the line for 14.5 of those sacks, or less than half of them. And that was during the Jamon Brown / Jason Peters part of the season.

A common rebuttal to my point that Wentz and the scheme were more responsible for the huge sack totals was that Jalen Hurts had a similar number of sacks allowed in his starts. Yep, sure did. Of course, Hurts was a rookie quarterback with running ability, and rookie quarterbacks with running ability almost always lean on that ability early in their careers, which leads to a high number of sacks.

But just to be sure, I went back and watched the 13 sacks Hurts took in his 3.5 games, and I came away with the conclusion that the line was responsible for three or four of those. I mean, Hurts ran out of bounds on a half dozen of them, lol. (Again, we'll show that soon.)

The reality is that Wentz stunk when he got pressured in 2020, and also when he didn't. The OL wasn't good, but it also wasn't that bad. "It was fine."

Question from Peanut Butter Jelly Time: Are the Eagles a "Bad Contract Factory?”

In a previous mailbag, we counted the number of contracts that the Eagles would probably prefer to just be free and clear of, with no penalties, if they only had that option. We came up with 14 players, though you could probably add more.

There has long been the idea that Roseman has struggled with player evaluation, but is an outstanding cap manager. The latter sure doesn't seem to be true at the moment.

Question from Doug from NH: Offense schmoffense. What are the Eagles gonna do about this D? Do the Eagles trade to improve their secondary, or do they reach for a CB like Patrick Surtain or Caleb Farley in the draft?

Again, this is going to be a multi-year rebuild. They're not going to fix everything in one offseason, or really even come close. There's going to be a few positions that don't get addressed with premium resources, whether they be in the draft or free agency. And specifically in 2021, that's fine. They're going to stink anyway. Whatever positions get ignored in 2021 can be addressed in 2022.

Question from Mig: Can you do like a "top 5 players that should be appealing to the Eagles at 6" so that I can at least be excited if the Eagles get one of them?

I’m going to do deep-dive profiles on 8-10 prospects that I think could go in the top 6 picks. That list will include Trevor Lawrence, Zach Wilson, Trey Lance, Justin Fields, Penei Sewell, Ja’Marr Chase, DeVonta Smith, and Patrick Surtain. I could maybe be talked into profiling Kyle Pitts and others.

Once that is done, I’ll have more fully-formed opinions of how I’d rank them, but yes, we’ll be doing that over the next few weeks.

Question from Sterling: I know this is a late question, but why do you think the press didn't... well, press Lurie about keeping Howie around? His reasons were flimsy and nonsense, and I felt he was kinda let off easy.

I didn't get a question in that presser, and I can assure everyone that I'm not really, really, really annoyed about it. Mine would have been a Howie question, just FYI. But Lurie did get four questions about Howie, including this one from off the top rope by Les Bowen, after Lurie pointed to the people Howie has surrounded himself in the front office as one of his best selling points:

"I think we all understand the things that were done to win the Super Bowl and to try to be competitive in the next couple of years, but nonetheless, the draft picks you have had during that time and some of the free-agent signings you have made during that time have not been very good. The drafts, in particular, there have been some really notable failures. If you do have all these great people and personnel and if Howie really is doing such a great job, then why is that?"

Also, as I learned from a lot of journalism experts after the Nick Sirianni press conference, you're not allowed to ask multiple questions about the same topic.

In the order that I watched them:

1) The Simpsons: My favorite show as a kid, by far. There are so many lines from that show that I will reference in general conversation until the day that I die. It’s amazing it’s still running. I would never watch a new episode these days, but from season 3 to like, season 10- or 12-ish, it was just such an incredible show.

2) Seinfeld: While some things on Seinfeld are outdated (like speed dial, for example), they just nailed the nuance of everyday situations, and made them funny.

3) It’s Always Sunny in Philadelphia: From a pure “made me laugh my ass off” standpoint, seasons 1-4 were absolutely hilarious. I got in early, sometime around season 2, and I downloaded every available episode on my early-version iPhone, ha. I remember watching them on the bus on my commute into NYC when I was in sales.

When you’re on the bus or the train on your morning commute, it’s just understood among the passengers that you sit there and STFU. No phone calls, no unneeded noise. And I really tried to adhere to that social contract among my fellow travelers. However, for the one week I watched It’s Always Sunny episodes, I don’t think I’ve ever laughed so hard in a “not supposed to laugh loudly” situation. The episode premises have since gone way too far over the top, which I get, but those first four seasons were funny as hell.

4) The Wire: The Wire was probably the first series I ever binge-watched in a short amount of time from start to finish. It just got better and better.

5) Breaking Bad: Like The Wire, I didn’t watch Breaking Bad until the series was complete. The ending of each episode were always fantastic, so much so, that I’d be super tired, and go, “Welp, I guess I’m watching one more.”