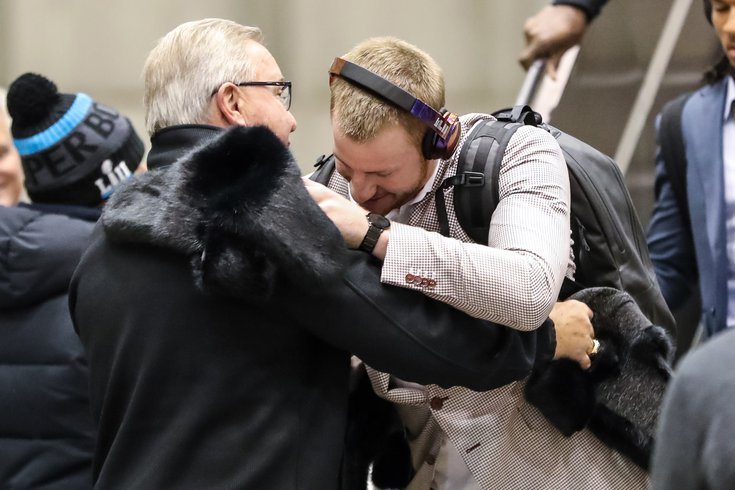 In an interview with Jeff Skversky of 6 ABC, former Eagles quarterback Ron Jaworski revealed what he understands to be the best offer the Philadelphia Eagles have received in exchange for Carson Wentz:

“My understanding is that the Colts have offered 2 - 2nd round draft choices, maybe a 3rd or 4th down the road. That appears to be the best offer I have heard”#Eagles holding out for 1st!@6abc@JawsCEOQB pic.twitter.com/kYVbhwnL3h

Don't like videos? You're welcome in advance for transcribing:

Obviously, the Eagles and Howie Roseman are trying to prop Carson Wentz up and create the best value for him. The talk is of a No. 1 almost similar to what Detroit got for the (Matthew Stafford) situation -- Two No. 1's and Jared Goff. That won't happen here. That will not happen. My understanding is that the Colts have offered two second-round draft choices, and maybe a third or fourth somewhere down the road. That appears to be the best offer I have heard from all the sources I have from around the league. That's the best actual offer that has been made. I'm sure the Eagles -- Howie Roseman, Jeffrey Lurie -- would like to get a No. 1 out of this, but as of now that doesn't seem to be happening.

Jaworski has close ties with the Eagles, and he even played a role in the hiring of Doug Pederson to become the head coach in 2016. But clearly, he is not working for the team now, as if he were, he would not be revealing that the best offer the team has received is... eh, just OK.

The assumption here would be that one of the second-round picks from the Colts would be in 2021, and the other second-rounder in 2022. The Colts hold the 54th overall pick in the 2021 draft. According to the trade value chart, that pick is worth 360 points. If we were to assume the Colts could be picking in the same neighborhood again in 2022, the value of those two second-round picks together would be worth the equivalent of a late first-round pick.

Would you do the deal Jaws is discussing?