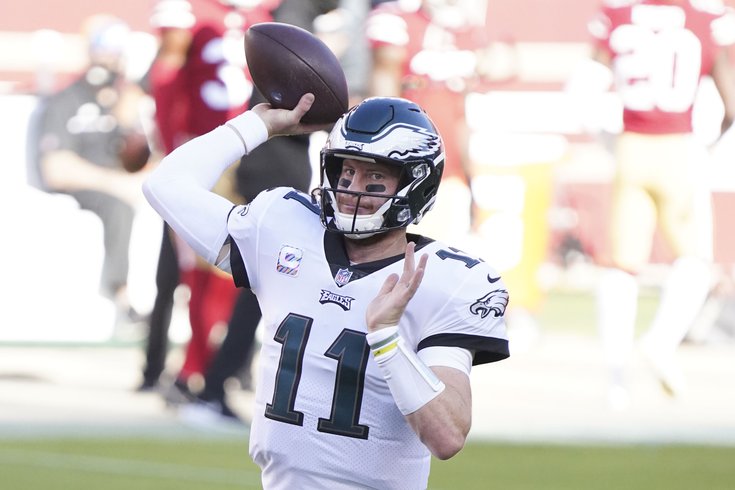 The NFL as a whole is in a very weird place right now, with more than a dozen teams considering or trying to find a new quarterback for 2021.

So while the Texans (DeShaun Watson) and 49ers (Jimmy Garoppolo) technically each have starting quarterbacks on their roster, both could have someone totally new under center next fall after some wheeling and dealing.

Could that someone be Carson Wentz?

Probably not. But that doesn't mean that both teams aren't doing their due diligence and at lease picking up the phone to inquire.

"That's what smart teams do, smart teams want to know the price tag on everything," said NFL writer Benjamin Allbright, via Sports Illustrated on a radio appearance in Houston. "Even if the Texans aren't the team that's necessarily going to make a move for Carson Wentz, they know the price tag for the future and that's a good thing to know."

"If you're going into your season (and) your quarterback isn't going to be there for you, you need to know what the cost is going to be, what the market rate is to go out and get somebody. The calling on Carson Wentz kind of gives you an idea, an inkling, of what the going rate it is right now. I don't think the Houston Texans could be in on Carson Wentz any way you slice it, they don't have the draft picks to be able to do that," going on to say "The Eagles want a Matt Stafford type deal."

Notice that Allbright didn't so much as mention Watson. The likelihood of he or Garoppolo being sent to Philly seems to be slim to none, and Wentz would in theory be brought in via a separate trade to replace one of the two, after the Texans or Niners receive compensation for their current QB.

In a tweet from Albright a few days ago, he remarked that a lot of teams, including San Francisco are calling and all of the leaked reports from teams interested provides a little insight as to where negotiations are.

They've talked, as has Indy.

Niners and (surprise) Texans have made calls that I'm aware of.

Lot of "offers" getting leaked, which usually means the team shopping a player is still fishing. https://t.co/6frz0uWMdc

The more teams you hear mentioned with connection to Wentz, the more you can assume Howie Roseman and the Eagles front office are trying to drum up interest. And with a trade reported as imminent before the Super Bowl and seemingly stagnant three long days later, one has to ask if there was some sort of hiccup or if Roseman overplayed his hand.

Reports came out a few days ago about there being a surprise team involved. Does this resolve that mystery?

Trades can gain momentum and be consummated very quickly, so the chatter about the Eagles asking for too much and losing leverage could all be made mum in the blink of an eye. Or it could all be falling apart. Either way, the drama is real.