NFL trade rumors: With Eagles fielding 'aggressive offers' for Wentz, a deal could be 'close' 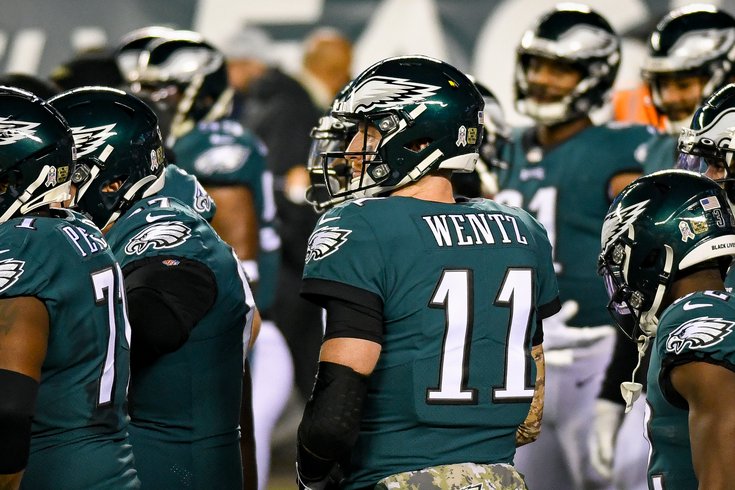 UPDATE [6:55 p.m.] — We can add another report to the litany of Carson Wentz rumors leaking out on Friday. This one comes from Les Bowen and Jeff McLane of The Philadelphia Inquirer and seems to not only double down on Bowen's reporting from earlier in the day, but also echoes some of what other outlets have been reporting in the latter half of this week: that the Eagles could be closing in on a Wentz trade.

Indianapolis seems a likely landing place if Wentz is traded, since the head coach there is Frank Reich, Wentz’s offensive coordinator with the Eagles for his first two years in the league. The Colts are expected to hire Press Taylor, the Eagles’ former quarterbacks coach and passing game coordinator, who is close to Wentz.  [inquirer.com]

In addition to the Colts, McLane also mentioned the Bears, which would not only reunite Wentz with former Eagles QB coach John DeFilippo, but also former teammate Nick Foles.

As for the asking price for Wentz, the Inquirer reports that it's going to be a hefty one, which could be one of the main obstacles to getting the deal done, even more so than the $33.8 million dead cap hit the Eagles would take or the tens of millions of dollars the acquiring team would be on the hook for.

Sources also said that Eagles general manager Howie Roseman has placed a high asking price on Wentz, which probably would translate into multiple draft picks. The NFL Network reported Friday that teams have been asking the Eagles about the price for Wentz, 28, who signed a four-year, $128 million contract extension in 2019.... Wentz’s cost to the acquiring team wouldn’t be terribly expensive for a starting QB. The new team could opt out after two more years and about $47.4 million.  [inquirer.com]

Any deal for the Eagles would likely need to be done by March 19, which is when Wentz is expected to be owed a $10 million roster bonus. It's hard to imagine the Eagles would be willing to pay that on top of the money they're already committed to paying. But based on these recent reports, it seems like a trade could be coming much sooner.

Yes, that's a very selective use of quotations in the headline, but it doesn't make it any less true, especially if you believe the reporting of several extremely well-connected football writers, both locally and nationally.

As the Carson Wentz saga drags on into Super Bowl weekend, all signs continue to point to an eventual divorce between the 28-year-old quarterback and the team that drafted him, although that's far from guaranteed. Still, Wentz is reportedly unhappy, and as recently as Wednesday, ESPN's Adam Schefter reportedly that Wentz "wants to leave the franchise," after he had previously reported that the former second-overall pick would request a trade.

There were thoughts that firing Doug Pederson would be enough to mend the relationship between quarterback and team, after reports that Doug's decision to rein in Wentz's freedom at the line of scrimmage and ultimately bench him was a main source of tension. But it seems like the schism is deeper than that, likely dating back to at least April when the team decided to draft Jalen Hurts in the second round, and possibly even beyond.

Now, it seems like every day there's a new report about Wentz's future (or lack thereof) in Philly — they're coming so fast we're going to soon reach critical mass and pass the point of turning back.

Wednesday brought about that latest from Schefter and another report from Albert Breer that Wentz doesn't want to be in Philly. A day later, on Thursday, Ian Rapoport and Mike Garafolo were reporting that some of the teams who missed out on the Jared Goff-Matthew Stafford trade had begun reaching out to the Eagles about Wentz. It hasn't even been 24 hours since, and we already have a handful of new reports about the Birds and their quarterback. Let's dive right in, starting with Rapoport, who expanded on some of his reporting from Thursday when he appeared on Good Morning Football on Friday...

"But that has not stopped teams from calling, and from what I understand the Eagles have engaged in some of those conversations just to see what it might be. No one has really ruled anything out and obviously we're going to be tracking this going forward, but Carson Wentz could be the next quarterback domino to drop. Probably not going to happen this week, but the more quarterbacks that come off the market like we saw last week, the more urgency there is for teams to acquire one. Clearly, Carson Wentz is getting the quarterback trade spotlight right now."

One thing Rapoport said in there that stands out is the part about it likely not happening this week (we're running out of time for that to happen anyway), but that there is increasing sense of urgency for the other QB-needy teams out there. A few hours after Rapoport said that, local beat writer Les Bowen came out with a report of his own that a deal might actually be close.

I've talked to an NFL source, not w/the Eagles, who hears a Wentz trade is close. That isn't first-hand information. I do feel that the longer we go without Wentz saying something like "I'm happy to be an Eagle and excited about playing for Nick Sirianni," the closer we get...

That would make sense given one of the other Wentz reports to come out on Friday, like this one from ESPN's Tim McManus, who said "the wheels are in motion" and that the Eagles have "already received aggressive offers."

ESPN's Adam Schefter said Wednesday that Wentz "wants to leave the franchise" and a trade is still in play -- a sentiment that has been echoed by multiple sources in and around the team in the days since. Wentz has not spoken publicly since the end of the 2020 season or signaled he sees a path forward in Philadelphia, even after Pederson, who had a strained relationship with Wentz, was fired.

The wheels are in motion. One league source said their understanding is Philadelphia has already received aggressive offers. The Eagles are looking for significant compensation in return for the 2016 No. 2 overall pick to justify losing the talent and absorbing the more than $30 million dead cap hit they'll take by trading him. Wentz was one of the NFL's worst quarterbacks statistically in 2020, and he is set to make $25.4 million in total cash next season -- third highest among QBs in 2021. Those factors will affect his value.

So there is some dancing yet to be done. But in order to avoid the drama and distraction that comes with retaining a high-profile quarterback who wants out, it's a safe bet the Eagles will work to make a deal happen, and have incentive to do so sooner rather than later before more seats get filled in the game of quarterback musical chairs.  [espn.com]

What those aggressive offers look like remains to be seen, as does whether or not one proves enough to tempt the Eagles into moving on from Wentz. Associated Press football writer Rob Maaddi, who is down in Tampa for the Super Bowl, provided some insight into how other NFL execs around the league value Wentz, and what the team could possibly get in return.

Lots of Carson Wentz talk here in Tampa. 2 team executives told me #Eagles should get at least a first-round pick for him. Neither thinks they could get two 1s. One says a 1 outside top 5. Other says a 1 in 2nd half of 1st round. Biggest question is will the Eagles do it.

Will that be enough for Howie Roseman and Jeffrey Lurie to get them to swallow the $34 million in dead money they'll be paying?

McManus, like Bowen, also seems to be of the belief that something could happen "sooner rather than later," which seems to be a growing theme among those who cover the team.

Perhaps that's because of yet another report about Wentz — we told you it's been a busy one — that came out on Friday, this one from Mike Garafolo, who appeared on the WIP Morning Show with Angelo Cataldi and Co. and revealed that the Eagles have already been in talks with one of the teams most often linked to Wentz: Frank Reich's Indianapolis Colts...

“I do know that the Eagles have had conversations with the Indianapolis Colts already. Here is the thing about the Colts, and this is why they were never strongly in the running for Matthew Stafford — these guys are really good at what they do draft-wise. They believe in themselves. So every pick that they deal away they think to themselves ‘I just dumped away a good player’, where as some GMs might say ‘Eh, you know what, I may have missed on that pick anyway.’ These guys believe they are going to hit on every single one. So what they do is, they are a little slow playing when it comes to these draft picks and trades.”  [radio.com]

That being said, the Colts don't appear ready to make a trade just yet.

Colts GM Chris Ballard on @dandakich: "There's no trade going down right now. Not today. Not the Colts."

Interesting that he qualified that with "not today," which is not nearly the same thing as saying definitively that a trade isn't happening. There's always tomorrow.

But the Colts might not even be the frontrunner anymore to land Wentz after Jeff McLane recently reported that a source close to Frank Reich said he wasn't even sure if Reich would want to be reunited with his former QB. Over at Bleeding Green Nation, Brandon Gowton broke down 11 potential landing spots for Wentz, and the most-likely destination was a bit of a surprise (although it makes total sense when you think about it).

Jon Gruden seemed pretty smitten with Wentz back when the quarterback came in for Gruden’s QB Camp segment that used to be on ESPN. Back in 2017, Gruden told high school football players that Wentz is the quarterback that they should emulate.

The Raiders have Derek Carr under contract through 2022 but they can trade him this offseason to clear over $19.6 million in cap space. Carr had the NFL’s ninth-highest passer rating last year but the Raiders have only gone 19-29 with him as their starter under Gruden. Wentz (turns 29 in December) is a little younger than Carr (turns 30 in March) and the Raiders might think he has a higher ceiling.

The Eagles would probably prefer to trade Wentz to the AFC if they can.

The next closest teams were the Bears and Broncos, who both checked in at 6/10, while the Colts were just a 4/10.

So, where will Wentz wind up? Will he even be traded? And if so, what's next for the Eagles? Is Jalen Hurts the answer? Or do they draft a QB with the sixth pick? It's already been a busy offseason of change for the Eagles, and it doesn't look to be letting up any time soon. Stay tuned...