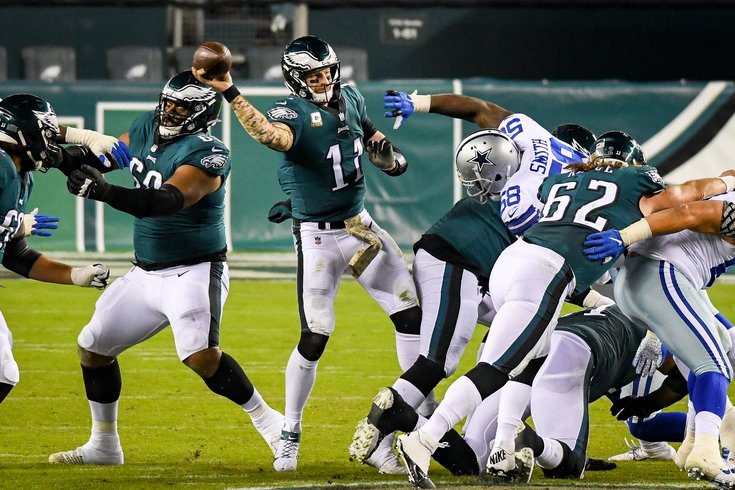 The two obvious and most talked about trade partners for the Eagles, who are actively looking to jettison Carson Wentz and fully commit to starting their franchise anew, are the Colts and the Bears.

For Indianapolis, the fit couldn't be better, as they're a ready-made playoff team looking to replace retired Phillip Rivers at quarterback. At head coach, they have former Wentz whisperer Frank Reich, who helped lead Wentz to his best season as a pro in 2017 when he had MVP buzz before tearing his ACL. They also hired one of Wentz's favorite Eagles assistants, Press Taylor.

Rumors circulating Monday morning more or less confirmed the Colts' interest but reaffirmed that they would not be played for fools and overpay for the 28-year-old veteran.

And then there are the Bears, who may well be played the fool if they are — as reported — interested in trading a first-round pick and two players for Wentz. These rumors surfaced before the Super Bowl and continue to persist, as many view these two as the only franchises truly interested. Chicago too has a coaching connection to Wentz in QB coach John DeFilippo.

But not so fast. A third undisclosed team is interested, according to NJ.com. Like happens sometimes in the MLB, there may be a mystery team monitoring the goings on between the Eagles, Bears and Colts with the intention of pouncing at the last minute. Who could this third team be?

Las Vegas has been mentioned as a Wentz suitor for weeks, and the team looks like it's ready to move on from longtime starter Derek Carr. Financially, it makes a lot of sense for the Raiders — they can trade away Carr and save a ton of cash (more than $19 million in cap savings). And with the Eagles on the hook for a pretty penny in dead cap for Wentz (nearly $34 million), he could be a bargain for the Raiders as they try and find a new direction at QB.

Head coach Jon Gruden has always been a fan of 2016's No. 2 overall pick, as has Raiders GM Mike Mayock, who famously touted Wentz as the top prospect in that entire draft. Would they be willing to part with the first rounder-plus package Roseman is reportedly seeking?

According to reports following the Matthew Stafford-Jared Goff blockbuster earlier this winter, the Panthers were in on the dealings and were willing to part with the No. 8 pick in the draft to acquire Stafford, clearly believing they are a solid reliable quarterback away from contending.

And while Wentz hardly proved he was that in 2020, having the worst season of any starting QB in NFL, Matt Rhule may be the kind of young enthusiastic coach who can get Wentz back on track. Philly and Carolina have a lot in common by way of former Eagles staffers now working for the Panthers. Current Carolina quarterback Teddy Bridgewater has a movable contract, at least by the Eagles standards, and one that can be eliminated relatively cheaply after the 2021 season. Would he be a good mentor and backup for Jalen Hurts?

Like the Panthers, the Broncos reportedly were willing to trade their ninth overall pick for Stafford. It's unclear whether they'd offer the same for Wentz, but logic would say they are at least kicking the tires on the Eagles QB. Denver has a talented team, with offensive weapons better than Philly has had in recent years, and definitely want to upgrade Drew Lock, who hasn't played particularly impressively since being drafted.

The Sporting News pondered Wentz's fit with the Broncos a few weeks ago:

In the right offense elsewhere, Wentz can enjoy a Ryan Tannehill-like resurgence. Wentz, with size and toughness that should appeal to the Hall of Famer Elway, had some real interest from the Broncos in the 2016 draft — before they took Lynch 24 picks later at No. 26 overall.

The Broncos project to have more than $25 million available under the cap for 2021, which could change based on the league's adjustment for lost 2020 revenue. There are also some big contracts they could cut to make more room for Wentz, led by cornerbacks A.J. Bouye and Kareem Jackson, who are set to count a combined $21.5 million toward the cap.  [SportingNews]

There are a half dozen other teams that have a QB need, like the 49ers, Washington, Patriots and possibly the Saints and the Jets, but those teams seem like they're on a third tier of possible interest behind the Colts, Bears and the three teams we mentioned above.

A trade could come as soon as later today, and there is a chance it's a team that come sout of left field. Eagles fans can only hope they only surrender Wentz to the highest bidder.