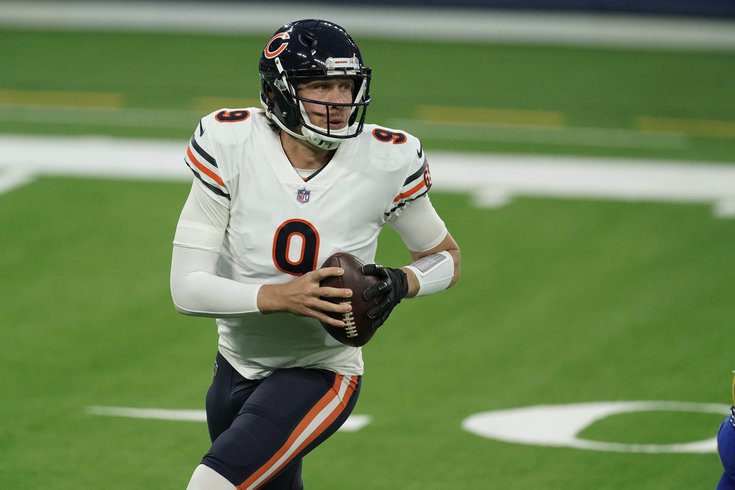 Nick Foles won a Super Bowl with the Eagles, so we'll use a picture of him.

Leave it to Philadelphia to have better things to do than talk about the Super Bowl.

With the big game set to kick off between the Chiefs and Buccaneers Sunday night, the battle between Patrick Mahomes and Tom Brady is far from the hottest topic on local sports talk radio shows or in group texts amongst Philly sports fans. It's the likely (we think) impending trade of quarterback Carson Wentz, which seems to be a near certainty this coming week if you believe reports that have been dropping from left and right with almost no enlightening information.

Eagles are expected to trade Carson Wentz in the coming days in what would be the latest blockbuster QB deal to rock the NFL, sources tell @mortreport and me. The most pertinent questions now become where, when and for what. But it could happen as early as this week.

In an article written by Schefter himself, the NFL insider says that the Eagles are looking for a huge package from a trade partner, one that perhaps includes multiple first round picks. Tweets from other so-called insiders suggest the Eagles' main trade targets are the Colts and Bears, with many other teams' interest less than serious given the high asking price.

So if the Eagles do take the plunge and suck up an all-time record $34 million cap hit, will they net the kind of return that will leave their front office and fans feeling good?

Late on Saturday, a handful of reports came out — specifically one from friend of PhillyVoice Natalie Egenolf — claiming a return for Wentz had been determined, and it included a familiar name.

You read that right. Nicky-Six himself, BDN, the Super Bowl MVP.

Somehow, this all seemed inevitable.

Foles carries with him a $4 million base salary (and would save the Bears $8 million in cap money if cut or traded) and was inconsistent as the Bears' starter in six games (and three relief appearances) during the 2020 season. He threw for 1,852 yards, 10 touchdowns and eight interceptions. But none of that really matters with Foles. He's been terrible in every other destination he's visited, but he always seems to perform well when he's in Philly.

And that actually might not even matter. With a team and locker room lacking identity with new head coach Nick Sirianni taking command, his value may be as a backup and mentor to Jalen Hurts (or a rookie should they draft a QB).

If Foles is traded back to Philly it makes sense. He could obviously start and play well (His salary says that too) but he would also be a great support system for Jalen Hurts like he was for Carson a few years ago.

The other player in the deal, according to Egenolf, is receiving-specialist running back Tarik Cohen, who missed most of 2020 with a torn ACL. And if you believe the words from the player himself, the trade we are discussing here has no legs whatsoever.

Lemme clear this up real quick . Just got off the phone wit my HC and GM , bears fans we locked in🤞🏾 don’t worry . 💯 people say anything nowadays man .

While there is so much to sift through, there will no doubt be a ton more news, if not the trade itself, next week. Stay tuned.