How did Big Dick Nick (Foles) get his provocative nickname?

Philadelphia sports fans really like to put a name on things.

Just this past year, the Eagles have given the world the "Philly Special," "Double Doink," "Big Balls Doug," and "hungry dogs run faster," among a bevy of other terms and phrases.

They also gave their legendary backup-turned-starter-turned-back-up-turned-starting quarterback a memorable moniker: Big Dick Nick. (Or Big Stick Nick, in the presence of children.)

If you are reading this, you are familiar with the name.

Where did he get it from?

The name, proclaiming to the world that the 6-foot-6 quarterback from Arizona has a gargantuan ding dong was not, as many would expect, originated by Philly fans just being Philly fans. Like so many pieces of folklore, there may be some truth to it. And while he's been a stud since returning to the Birds two seasons ago, it has less to do with his play on the field than, well, other things...

In a post on the sports gossip site Deadspin.com, a Reddit Q&A with former defensive end Connor Barwin was cited way back in 2014, during Foles' first tour of duty with the team that drafted him. For whatever reason, Barwin chose to answer a posed question from a fan about whose Weiner Schnitzel was the biggest in the Eagles locker room. His reply:

For what it's worth, Evan Mathis, a former offensive lineman chimed in too, saying "I do not condone this reply," in the response on Reddit.

Foles was traded away in 2015 in a move that would eventually forge the path for the Eagles to gain enough firepower to move up and draft Carson Wentz in 2016, and the pontification over his third leg went mum for a few seasons.

Foles signed in Philly as a free agent and took over for Wentz after the MVP candidate tore his ACL and was done for the season. His performance started slow, but eventually Foles became a playoff legend, downing the Falcons and Vikings to get Philly back to the Super Bowl — where he outdueled Tom Brady and won MVP. 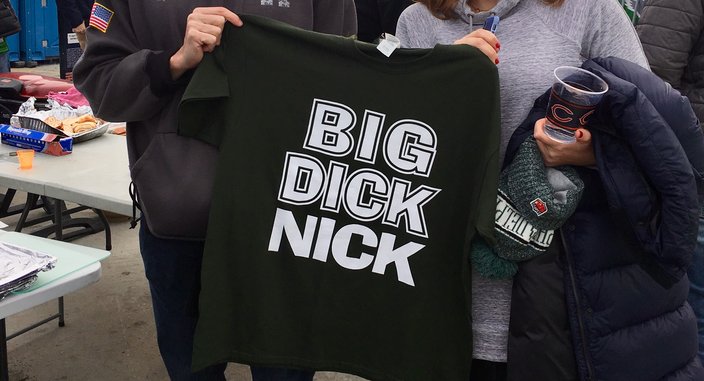 There is an element of irony to all of this. Regardless of the size of his schlong, Foles is one of the nicest, most religiously devout and kind players not just on the Eagles, but in the entire NFL.

Players have come out and said they have never even heard the 29-year-old curse — even when he was plowed into the turf by Texans' defensive end Jadaveon Clowney and missed a play back in Week 16.

Lane Johnson said Nick Foles never cursed while he was yelling about that facemask call the refs missed. Lane tried to listen closely because he had never heard Foles curse and he thought that might be his chance. Nope. #Eagles

There have been stories about Foles and his wife and how special they are to the community, like this one from a staffer at The Ringer:

I worked at a restaurant named Buddakan in Philly. Nick and his gorgeous wife, Tori, sat in my section. They both treated me so kindly and were so interested in me and my life. They were very in love, and I overheard very sweet and kind words back and forth to each other all night. Long story short, Nick looks up at me and says, “You have something, I can see it, follow your dreams.” Tori nodded in agreement. In that moment, I thought, WOW WHAT A GUY! WHAT A COUPLE. THAT’S SPECIAL. Also, they tipped me $200 on a $150 check. So, yeah, I’m all in on Nick Foles and I hope he throws for 400 yards Sunday. [The Ringer]

For a man like that to have a headline like this run after he wins a championship is worthy of a chuckle for more than a few reasons:

The nickname doesn't seem to be going away, and there will be chatter about the size of Foles' manhood probably forever. In Eagles chats with Jimmy Kempski, you'll see him referred to lovingly as BDN (shorthand of course for big disco-stick Nick).

And you can thank one-time fan favorite Barwin — who famously gave charitably and took the subway to work every day while he was an Eagles player — for taking a peek, curiously, at his teammate's pied piper one day after practice and confirming to the world that it was, well "nice."

Did he know it would become as Philadelphian as "Dr. J" or "The Answer" one day? I would guess not.

PhillyVoice reached out to Barwin after this story was first posted and the current Giants' pass rusher told us "I think I'll just leave it there. Happy as hell for him!"

We are pretty sure he meant for his success — but he's probably happy about the other thing too...

And that, my friends, is the origin story of Footlong Foles — the incredible quarterback whose legend continues to grow. We hope that you were over 18 years old while reading this and we apologize for the vulgar language and subject matter. But if you're from Philadelphia, you probably have one of the 13 BDN shirts available on Amazon already. (And if you don't you should get one.)