What they're saying: Everyone wants to copy Eagles — and Pederson responds to 'Big Balls Doug' nickname 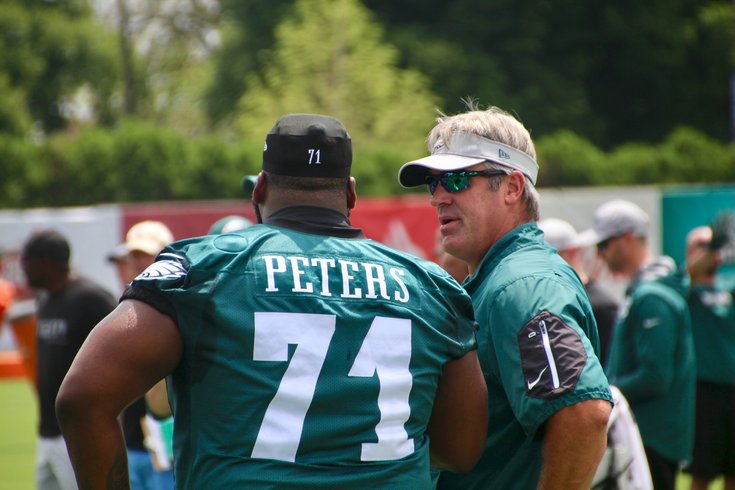 Jason Peters and his son, Doug.

The Eagles play their first preseason game in less than 24 hours. What happened to the summer?

Well, let's not waste any of your time with a big intro, here's the latest look at what the local and national media are saying about the Birds...

Who's got the biggest balls of them all?

If you're too young to get the AC/DC reference in this headline, then you may get the "South Park" reference in this Doug Pederson Q&A from Sports Illustrated. The rest of it is good, but this bit definitely made me smile.

Mitch Goldich: You talk a lot in the book about being aggressive, and you’re now pretty well-known for that. There are people who’ve given you the nickname Big Balls Doug, which I’m sure you’ve seen…

Doug Pederson: I’ve seen the caricature, or whatever you call it.

MG: So what are your thoughts on the nickname and the meme?

DP: Gosh. You know, it sounds a little, it sounds bad, but … I love being touted as being aggressive. Because if I only get one opportunity in this business to be a head football coach, I definitely want to do it my way and lead my way. Calculated, not a gambler by any means, or on a whim. Very calculated and thought-out and detail-oriented. But at the same time, put our team in a position to be successful, and help us win as many games as possible each season. So it’s an honor to be respected and be thought of that way. The pictures, obviously, I could do without. But it’s an honor.  [si.com]

Over at ESPN.com, Bill Barnwell wrote about how other teams in the league are taking pieces of the Eagles' blueprint and trying to apply it to themselves. It's not that one team is trying to replicate it exactly, but that might not be the worst idea ever...

The NFL is a copycat league, and after the 2017 season, the Philadelphia Eagles are playing the role of the cat. Doug Pederson's team went from last place in the NFC East to league champions in 12 months, exceeding even the wildest expectations of most Eagles fans in the process. While there were those around the league who were looking at the Eagles as surprise contenders last season -- and underlying statistics suggesting Philadelphia was likely to take a step forward -- nobody expected to see a parade on Broad Street in February of 2018.

Of course, there are some things teams can't steal. All the tape study in the world isn't going to turn a mediocre quarterback into the Carson Wentz we saw last season, with the second-year passer playing like an MVP winner before going down with a torn ACL in December. In a way, though, the fact that the Eagles did end up winning a championship with Nick Foles under center makes their blueprint even more relatable. It's a lot easier to find someone Jeff Fisher couldn't do anything with than it is to find a young MVP candidate under center.

Also on ESPN.com, there's an NFL predictions post from eight of their insiders and it covers a variety of topics, several of them directly relevant to the Birds. Here's a few...

In other words, who will be the under-the-radar free agent signing that will have the biggest impact in the league his year.

Tim McManus, Eagles reporter: Mike Wallace, WR, Philadelphia Eagles. The combination of Carson Wentz's big arm and Wallace's speed could be scary. Wallace leads the NFL in 50-plus-yard receptions since 2016 (eight). He figures to be an upgrade over Torrey Smith as a starter opposite Alshon Jeffery and should boost an already high-powered offense that tied for second in points per game last season (28.6).  [espn.com]

Four picked over, while four went under. Here's one of each...

Field Yates: Over. The roster is without a major flaw, and while the Eagles will face the proverbial "best shot" from every team on the schedule, the culture of confidence and cohesion in Philadelphia leads me to believe that sustained success is ahead. Plus, have you seen those offensive and defensive lines?  [espn.com]

Kevin Seifert: Under. As we speak, the Eagles don't know whether they'll enter the season with a quarterback fresh off major knee surgery or his backup. It's true that Nick Foles was the Super Bowl MVP, and could fill in well for Carson Wentz again. But given the uncertainty at the position, and a full offseason for defenses to better prepare for the spread looks that the Eagles and other teams are using, I'm not willing to say this is an 11-win team quite yet.  [espn.com]

Where will Wentz finish in MVP race?

Some said as high as top 10, while other were far less optimistic. Here's one of the less positive ones, but one that also makes some good points.

Dan Graziano: I think the most likely outcome is that Carson Wentz sits out the MVP discussion this year. Not only is it unrealistic to expect the same kind of magical year for the team itself, but it'd be hard to expect an exact repeat of Wentz's individual season even if he'd had a healthy offseason. He hasn't, and it's important to remember that he is still a young player heading into his third season. Not only is it possible he struggles to shake off the injury, but it's likely the Eagles' coaching staff had a plan for Wentz's continued development this offseason that it was unable to put in place because of his rehab. The arrow still points up for Wentz, but expecting MVP-level play every year is not realistic.  [espn.com]

Age is just a number

This was interesting, and I can't help but think a healthy 2017 season could've vaulted Peters into the Top 10. They also had DeSean Jackson ranked 24th.

Here are the top 25 players who have played in the NFL since at least 2008. With apologies to players like Eli Manning, Frank Gore, and Greg Olsen, this list is in order of how good these players are right now. ...

In 2008: By his fifth year in the league, Peters had two Pro Bowl appearances under his belt, but his future as a top left tackle was still in doubt. He allowed 11.5 sacks that season, and the Bills traded him for first-, fourth-, and sixth-round picks.

In 2018: Peters has made the Pro Bowl every healthy year since 2008, and has also notched two All-Pro appearances. He’s one of the best tackles in game, but now his health is in question: Peters tore his ACL and MCL seven games into the 2017 season, though he was participating in 11-on-11 drills in training camp.  [theringer.com]

Finally, here are two of Reuben Frank's 10 observations this week. Why these two? Well, the first one brings us full circle back to Pederson. And the second one is just plain awesome.

3. Standing in the Pro Football Hall of Fame on Friday staring at the "Philly Special" football behind a glass case I couldn’t stop thinking … “Doug Pederson called a trick play where an undrafted rookie running back flipped the ball to an undrafted backup tight end who threw a pass to the backup quarterback … in the end zone … in a Super Bowl … on fourth down … just before halftime … against Bill Belichick’s defense.” I still don’t know if I’ll ever grasp just how insane that really is. ...

7. There are 28 quarterbacks in the Pro Football Hall of Fame. Only six of them have had more career playoff games with a passer rating of at least 100 than Nick Foles (Joe Montana, Brett Favre, Troy Aikman, John Elway, Dan Marino and Steve Young).  [nbcsports.com]