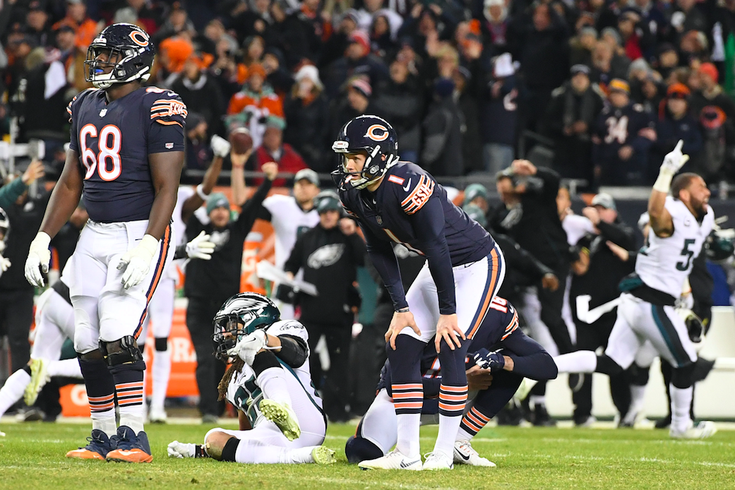 Chicago Bears kicker Cody Parkey (1) reacts after missing a field goal against the Philadelphia Eagles in the fourth quarter of a NFC Wild Card playoff football game at Soldier Field on Jan 6, 2019.

In the chaos surrounding the Eagles' 16-15 playoff win over the Chicago Bears on Sunday, the immediate reaction was shock and glory.

Piling on Cody Parkey, a former Eagle whose misfortune was a gift to Philadelphia, seemed like a natural competitive gloat. Empathizing with him was impossible and undesirable, frankly. There is nothing like missing a game-winning field goal in the playoffs.

In a movie, they'd probably use CGI for a double-doink, so rare was the agony of this ending.

Since Sunday, the NFL has officially confirmed that Parkey's kick was tipped by Eagles defensive tackle Treyvon Hester. The record will show that it was a blocked kick, not a missed field goal for Parkey. That doesn't help much when you've spent the last 18 hours getting death threats from drunk and unstable Bears fans, or Venmo donations from obnoxiously clever Eagles fans.

As a multimillionaire athlete, the chance you'll be known forever as the guy who double-doinked a crucial field goal is part of the job. It's probably worth it, truthfully, but that doesn't mean this won't eat at Parkey. Even the guy he replaced in Chicago, Robbie Gould, was at the game with his kids to see that moment.

Teaching these boys the history of da @bears #WPMOYCHALLENGEGOULD pic.twitter.com/r7OdoczB7S

On Monday, Eagles kicker Jake Elliott stepped up on Twitter to support his fellow special teamer.

This is a stand up guy that a lot of young players can look up to. This is how you handle adversity like a pro. Cody is a heck of a kicker and will be for a long time. No reason to be taking the heat he is especially when that ball was tipped. #ClassAct https://t.co/Ae2kr0DYIy

It's a classy move from Elliott, who's been enjoying the kind of success Parkey did early on as an Eagle, before a hamstring injury derailed his time here.

Chicago signed Parkey to a four-year, $15 million contract last offseason, with $9 million in guarantees. It will be interesting to see whether the team stands by him after a season of fluke-level doinks, or cuts him and gives the remaining money to their mascot.

The #Bears mascot deserves a raise

Someday, on an island with a daiquiri, maybe Parkey can laugh about how cinematically perfect this was for such an awful moment — well, for the Bears, anyway.