Could Carson Wentz himself blow up a possible trade? 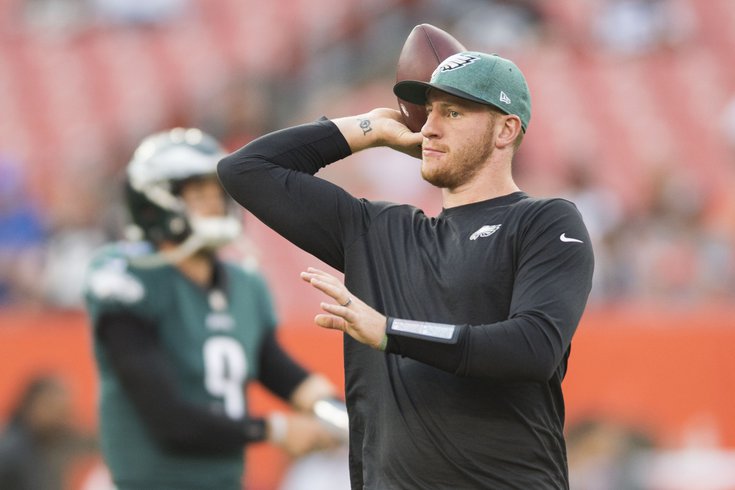 It's been clear for the better part of two weeks now that the Eagles have two serious suitors for Carson Wentz: the Bears and the Colts.

The waiting game we are currently stuck in is about which team blinks first — and if Howie Roseman either lowers his asking price or if one of those two QB-needy franchises offer enough to make it worth the Eagles' while (in order for them to willingly eat a $33.8 million dead cap hit).

It seems like, according to reports, Wentz prefers the Colts, but the Bears are perhaps the team with the most interest.

“I think Chicago is the front-runner ... and I do know there’s a feeling inside that building from Ryan Pace, from the coaching staff, Matt Nagy, John DeFilippo [...] they believe, mechanically, they can fix him. ... I think the issue right now, Colin, is where Carson Wentz wants to go. I think it’s become pretty clear he’d rather go to Indianapolis, and I think part of it now, for the Eagles, is, ‘Alright, if our best return now is Chicago over Indy, then we need to convince Carson Wentz, this is the only place you’re going, bud, and you need to buck up and accept this, and realize the Bears are going to give you a good chance.’ I think it’s pretty clear at this point that the Bears have pushed harder than the Colts to get Carson Wentz. ... I think the Bears would like to at least know that Carson Wentz is on board before pulling a trigger on a trade.”  [Colin Cowherd Podcast]

Wentz doesn't have a no-trade clause, but he may as well have given the stubbornness and unwillingness to cooperate he's shown over the past few weeks — from leaks of his refusal to accept a competition with Jalen Hurts to start (despite his awful play that would warrant it) to his "fractured" relationship with former head coach Doug Pederson and now using his influence to pick where he's traded.

If he were to be sent to Chicago, he would be playing for John DeFilippo again, a match that on paper should be ideal for Wentz — the quarterback did play his best with Flip in the Eagles QB room. But the coach is now known for being one of the tougher influences on Wentz, and he probably prefers the more welcoming arms of Frank Reich and Press Taylor in Indianapolis.

If Wentz puts up a fight, the Bears, according to Breer, may pull their offer. After all, he capped that above answer off by saying, “The Bears would like to at least know that Carson Wentz is on board before pulling the trigger on a trade,” a line that is worth repeating.

With reports before the Super Bowl all but assuring a trade would be put in place imminently proving to be incorrect, one can now understand why. With so many moving pieces and so much riding on the handling of the Wentz situation by the Eagles front office, they just have to get this right.

And getting it right, reportedly, could include them having to get Wentz in line.