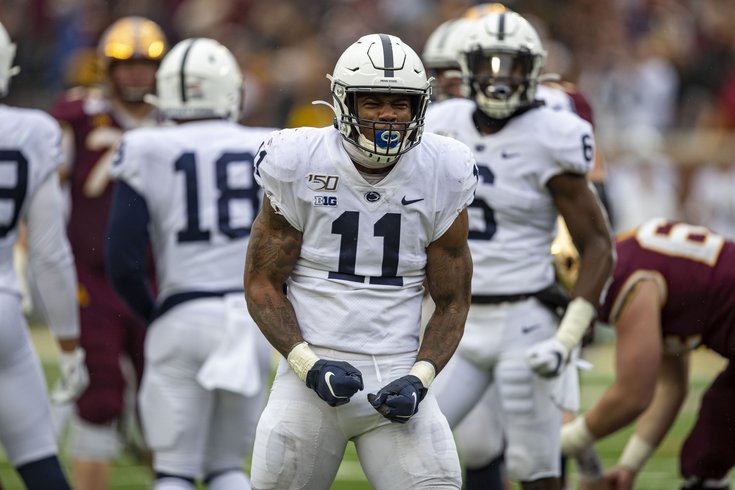 On Monday, we published our second Philadelphia Eagles-only mock draft of the offseason. Today we'll take a peek around at some of the national guys and see who they have going to the Birds at 6th overall.

I believe the Eagles will stick with their current quarterback situation and give the offense a boost with the most polished receiver in the draft class.

#JimmySays: To note, Jeremiah released his first mock draft on Jan. 22. It's interesting that at the time he thought that the Eagles would stick with Carson Wentz. He has since tweeted this:

It’ll be interesting to see what the Eagles get back for a Wentz trade (if it happens). My guess- future 1st and current 2nd or 3rd round pick.

That feels like an oddly specific guess for a guy who didn't think a deal would get done at all a few weeks ago.

[UPDATE: In his second mock draft, which came out on Tuesday after this was published, Jeremiah had the Eagles taking Florida TE Kyle Pitts. We'll have more on him in a minute.]

Parsons, who opted out of the 2020 season due to the pandemic, is scary talented with outstanding body composition, rare speed and excellent open-field tackling ability. He'll help tighten up the Eagles' porous linebacker corps.

#JimmySays: At some point, the Eagles do have to place more value in the linebacker position, but they are simply not going to overcorrect to the degree that they'd take one 6th overall.

The Eagles could take a receiver here, but no team has selected first-round wideouts in consecutive drafts in 15 years, and I don't see that streak ending with Philly. Instead, the Eagles nab a much-needed shutdown corner in Surtain, who will be the highest-rated defender on many teams' draft boards.

#JimmySays: In this mock, Ja'Marr Chase is still on the board with the Eagles taking Surtain. Who cares if no team has taken a WR in the first round in consecutive seasons in 15 years? If Chase is there, you thank the teams in front of you for not taking him and turn in the card.

In Round 2, Reuter has the Eagles taking LSU WR Terrace Marshall (which I guess is OK, since it would be 5 picks removed from the first round), and in Round 3, he has them taking Pitt DE Patrick Jones.

If the Eagles hope to revive Carson Wentz's career, they must upgrade the weapons around him. Pitts is a playmaker with the capacity to create mismatches as a hybrid WR/TE. Remember, Zach Ertz is entering the final year of his contract and is the subject of trade rumors.

#JimmySays: Pitts is awesome, and he's probably going to be a really good TE in the NFL. However, there are so many reasons against the Eagles taking him at sixth overall:

It's just too hard to justify.

The Eagles had a disastrous 4-11-1 season, with quarterback Carson Wentz regressing and getting benched for rookie second-rounder Jalen Hurts. And yes, Wentz was not very good, but his receivers didn't exactly give him much help. The Eagles got only 20 total catches from veterans Alshon Jeffery and DeSean Jackson due to injuries, and 2019 second-round pick J.J. Arcega-Whiteside barely got on the field. So even though Philadelphia drafted Jalen Reagor in Round 1 a year ago, I still see this as a hole in the offense. Waddle, one of the fastest prospects in this draft, could be the go-to target in new coach Nick Sirianni's offense. He was one of college football's most electric receivers over the past three seasons, even if he was overshadowed at times by teammates Henry Ruggs III, Jerry Jeudy and DeVonta Smith. His ceiling at the next level is as a No. 1 pass-catcher.

#JimmySays: Jaylen Waddle's first four games before he got hurt on the opening kickoff in Game No. 5 against Tennessee:

If Waddle never gets hurt, does DeVonta Smith go on to win the Heisman?

Anyway, there are some who believe that Waddle's traits — namely his elite speed — will translate better to the NFL than Smith's.

MORE: Roseman appears to be at crossroads in Wentz trade negotiations | McMullen: The Eagles have to figure out what to do at quarterback again

The Eagles' wide receivers room ranked No. 30 in yards this season (2,082), and they were one of three teams to catch fewer than 60% of their WR targets (56.3%). Those numbers came even after they drafted Jalen Reagor in the first round last April. The Eagles need to give quarterback Jalen Hurts -- who is taking the reins as the team moves on from Carson Wentz -- tools to succeed, and that, of course, starts with a game-breaker on the outside.

Chase vs. Alabama's DeVonta Smith is a tough call, but I think Chase might have slightly better traits and certainly more size at 6 feet, 200-plus pounds. You might have forgotten because he opted out in 2020, but Chase had 20 touchdowns and nearly 1,800 yards in 2019. It's win-win for Philadelphia if both receivers are still on the board, but the LSU product gets the call here.

#JimmySays: Chase falling to the sixth pick is the ideal scenario for the Eagles. He feels like the safest, can't-miss prospect in this draft. When he and Justin Jefferson were in the same offense at LSU, Chase was clearly the better receiver, and as we saw in 2020, Jefferson tore it up in his rookie season in the NFL.

With the uncertainty of the organization’s quarterback situation, the Eagles are another team that might be in the mix for a top-10 quarterback prospect. But in this scenario, Howie Roseman and the front office decide to build up the roster, adding a three-level threat like Chase, who can be a legitimate No. 1 receiver in any offense.

The idea of taking a first-round receiver in back-to-back years (and a second-round receiver the year prior) may be a tough pill to swallow, but those are sunk costs. The Eagles need a reliable No. 1 receiver, and Smith quite obviously fits that bill.

#JimmySays: There's the "back-to-back year" thing again. Does that really matter to people?

Chase is our WR1 by a whisker. He doesn't have elite athleticism but he is a dog; he consistently wins at the line of scrimmage, plays with the type of physicality you rarely see in college wideouts, and is at his best in contested-catch situations. However the QB situation resolves itself in Philly, Chase immediately improves the WR corps.

MORE: NFL trade rumors: Eagles have reportedly spoken to Colts, Seahawks about Zach Ertz | Mailbag: If Eagles get a first-round pick for Wentz, is it better in 2021 or 2022?

Parsons is an athletic specimen at the off-ball linebacker position and has serious edge-rusher ability.

If I were Philadelphia, I'd ride it out with Carson Wentz rather than drafting a quarterback this year but it sounds as though the relationship is beyond repair. The Eagles should not be comfortable with having just Jalen Hurts at quarterback and most teams do not feel any sort of obligation to a second round pick.

#JimmySays: In this scenario the Eagles are trading up to pick No. 3 to take Fields. And... Ew. I don't think I would take Fields with the 6th pick, much less trade what would surely be an absurd price to go from 6 to 3 to get him.

Eagles fans are a passionate and spirited bunch that seem to be most fond of Chase as the Eagles’ pick in mock drafts—and I want them to be happy, so here you go! I get it. After opting for Jalen Reagor over Justin Jefferson and J.J. Arcega-Whiteside over D.K. Metcalf, the desire to get the position right is strong. While there was some inconsistency for Reagor, he is still very talented and capable of developing into a dangerous weapon for the offense. Pairing him with Chase would provide Philadelphia with an exciting pair of receivers to go with Dallas Goedert and Miles Sanders. Now about that quarterback position...

Drafting a corner was tempting here, but I just can’t pass on Ja’Marr Chase, who I believe is the safest prospect outside of Lawrence in this draft. After seeing what Justin Jefferson did in the league his first year, it’s impossible for me to not think Chase is destined for similar success, as he was clearly the better player when they were both on the same LSU team. Adding Chase to the Eagles’ receiver room will give whoever is playing quarterback a chance to be successful.

MORE: WTS: Why Eagles haven't traded Wentz (yet) and how packaging him with Ertz can help | Podcast: Sorting through a long week of Wentz rumors

The Eagles got some flashes from Alex Singleton but otherwise had a glaring defensive weakness at linebacker, struggling both in cleaning up against the run and second-level pass coverage. They can stay in state to get a rangy playmaker in Parsons, going for matching value with need vs. going wide receiver. Parsons is a hard-tackling and well-covering cleanup man in the Luke Kuechly game-changing mold.

It looks like a strong possibility that Carson Wentz is playing elsewhere in 2021, but don’t you think Jalen Hurts would enjoy throwing to Chase and last year’s first-round pick Jalen Reagor? Add in Dallas Goedert with Miles Sanders out of the backfield behind an offensive line that returns from injuries, and their young quarterback would have the tools needed to succeed.

#JimmySays: The final tally on the above 15 mocks:

MORE: Jaws discusses the 'best offer' Eagles have received for Wentz | How could Eagles possibly have second best odds to win NFC East?