The local product grew into the tight end role in high school, and is now one of the best players in the country 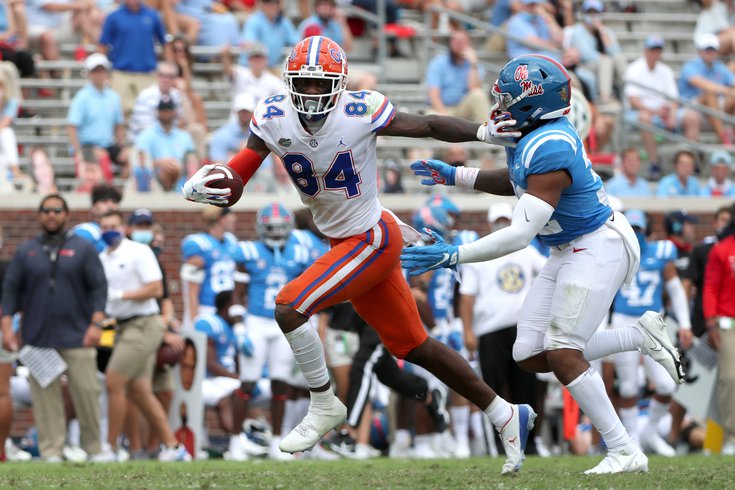 Tight end Kyle Pitts is having a breakout year at Florida.

The sun was slowly sinking. Everyone else was walking off the field. They were done. Kyle Pitts wasn’t. The 6-foot-6, 246-pound Florida junior tight end — by way of Archbishop Wood — felt he needed more work. The media would have to wait another 10 minutes.

Pitts wanted to get more reps in as the Gators prepared to take on Kentucky on Nov. 28, his first action since suffering a severe concussion in Florida’s 44-28 victory over Georgia on Nov. 7.

Then, Pitts did what he’s usually done this season, shred the Wildcats’ defense for five catches for 99 yards and three touchdowns in Florida’s 34-10 Southeastern Conference victory last Saturday.

At times throughout grade school and portions of high school, coaches tried defining Pitts in positions other than the position Pitts always defined himself — as a tight end. He’s proving to be the best college tight end in the nation.

Who knows, with the way the Eagles are playing, maybe there is a chance he can come home — although the Birds already appear to have a bit of a logjam at tight end.

For now, Pitts is working on honing what is already an abundant skill set. He’s fast, large, incredibly athletic and possesses a great work ethic.

As a freshman and sophomore at Abington High School, before transferring to Wood as a junior, Pitts was slotted at quarterback and linebacker. He grew about eight inches between sophomore and junior years, and was like an athletic baby deer. He still had to grow into his coordination. At the time, he could only catch the ball if it was thrown right at him.

“Kyle was an amazing defensive end, and I remember him having one of the greatest individual performances I ever saw, when we beat Archbishop Ryan in the 2016 Catholic League 5A championship,” said Kyle Adkins, Wood’s former head coach and defensive coordinator under Steve Devlin, now the linebackers’ coach at Ursinus. “He had an interception return for a touchdown, and forced two fumbles for touchdowns.

The problem was, Pitts envisioned himself as a tight end. 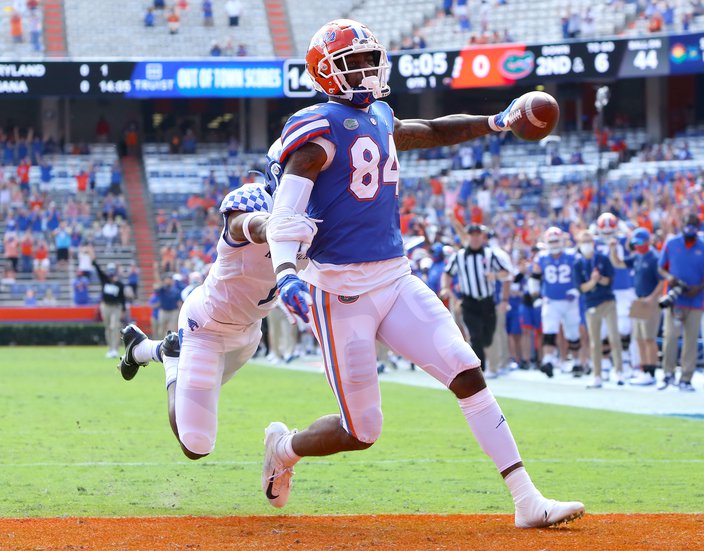 “It’s been a weird, but good journey,” Pitts told PhillyVoice. “I started at quarterback and linebacker, then when I transferred to Wood to my junior year, that’s when I told Devlin that I wanted to play tight end. I had been going to summer camps and I was being recruited to play tight end.

“I learned the position a little and by the time I got to Florida, I sat, because I had three fifth-year seniors in front of me. Some guys got hurt, and I got put out there as a receiver, which gave me the opportunity to learn the offense. It gave me the chance to get my feet wet.”

They were some soaking, wet feet. Pitts caught 54 passes last year for 649 yards and five touchdowns, averaging 12 yards a catch. He’s a matchup nightmare — too big for smaller, faster linebackers or defensive backs to defend, and too fast and athletic for heavier linebackers and safeties to stay with.

“When I was younger, I would say playing tight end was not something that I had to fight for, but I think the kind of success I’m having comes from hard work,” Pitts said. “I felt like the work I put in has started to show. But I’ll admit, I’m doing better than I thought.

Coming from Philadelphia, being from the area, we’re a bit different. We have a different type of work ethic; we’re blue-collar kids and competition makes me excited.

“I would say the biggest challenge I’ve faced is blocking. Last year, when I was a little lighter, there were some people who questioned if I can block, am I heavy enough? There were a lot of questions about that, but that’s an area that I took the time to put the work into, getting bigger and stronger, so there were no questions about it.”

Pitts entered the season being a greater mismatch problem. There were some concerns, he admits, over the COVID-19 pandemic.

“We didn’t know whether we would have a season or not, but stayed tight-knit and together,” Pitts said. “Everyone didn’t give up hope. We kept faith, and in the end, we’re having a season and we are prepared.”

None of Pitts’ success has surprised Adkins.

“Kyle deserves a lot of credit, because of his work ethic and his work ethic at Florida is the same as it was at Wood,” Adkins said. “He just wanted to get better and better, and now he’s going to be a top-10 pick in the NFL draft.”

Pitts has now become a prime target for opposing teams.

“I have the same approach each game letting the game come to me,” Pitts said. “I’d tell anybody who has dreams that they need to keep going. Any time someone tells you ‘no,’ that should put fuel in your fire. Coming from Philadelphia, being from the area, we’re a bit different. We have a different type of work ethic; we’re blue-collar kids and competition makes me excited.

“All of that adds an edge to you to separate yourself from the rest.”