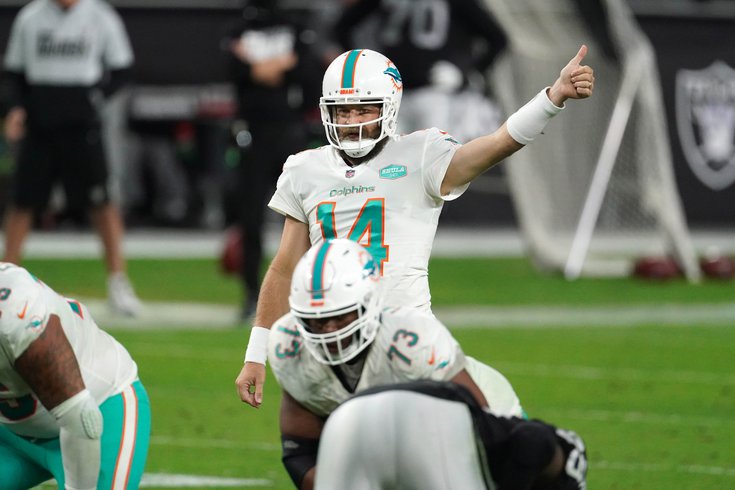 Ryan Fitzpatrick is excited to go from South Beach to, uh, Landover, Maryland.

With the help of Doug Pederson and the tanking Philadelphia Eagles, the Washington Football Team won the NFC East in 2020 with a 7-9 record. Woohoo! Then, as everyone expected, they were quickly eliminated at home by the eventual Super Bowl-winning Tampa Bay Buccaneers.

Looking forward, the Football Team actually has some nice things to build around. They have one of the best defensive lines in the NFL, a nice secondary, good skill position players on offense, and a decent offensive line, to name a few. But, as always, they don't have a franchise quarterback.

Let's take a look at what the Football Team did this offseason.

• OG Brandon Scherff: The Football Team tagged Scherff for the second straight season. He'll count for $18,036,000 on the cap in 2021 if the Football Team can't get a long-term deal worked out with him. Scherff is the highest-paid guard in the league by a mile. The next closest player under contract is Brandon Brooks, at a hair over $14 million.

Is Scherff worth $18 million? He decidedly is not. However, I can understand Washington's reluctance to just let him go and open up a huge hole along their offensive line.

• K Dustin Hopkins: Hopkins is back in a one-year deal. He has made 83.9 percent of his field goal attempts over his seven-year career.

• RB Lamar Miller: Yep, that's the Lamar Miller who played for the Dolphins and Texans. Miller re-signed with the Football Team on Wednesday. If I'm being honest, I didn't even know he was on their roster in the first place. Apparently, the Football Team poached him from the Bears' practice squad late in the season in 2020.

• OT David Sharpe: Appeared in six games last year, started two, both of which were wins (over Cincy and Dallas).

After signing Heinicke to a two-year deal worth $4.75 million earlier this offseason, the Football Team inked Fitzpatrick to a one-year deal worth $10 million, with a max value of $12 million.

Former Dolphins’ QB Ryan Fitzpatrick reached agreement with the Washington Football Team on a one-year deal worth $10 million that could grow to $12 million with incentives, per source. Fitzpatrick is expected to head to camp as the starter, with competition from Taylor Heinicke.

The Football Team also employs Kyle Allen, so if they intend on keeping him on the roster as well (I believe they will), then the Football Team is not going to be in the market for a new quarterback in the 2021 NFL Draft. That's the downside of winning a terrible division and immediately getting bounced from the playoffs in the first round.

The 38-year-old Fitzpatrick is a fun quarterback to watch, and he'll help the Football Team's chances of winning the division, but he's not going to make this team a Super Bowl contender. He's on his ninth team, and he has a career record of 59-86-1, albeit on some teams with bad rosters otherwise. In fairness, Fitzpatrick racked up a lot of losses early in his career. Over the last seven seasons, he has a somewhat less egregiously bad record of 32-37, and he went 4-3 with Miami a year ago.

On the one hand, the Fitzpatrick signing does not give the Football Team a long-term answer at quarterback, or even the potential for one. Quarterback will continue to remain the most glaring long-term need on the roster next offseason, regardless of how Fitzpatrick plays. In that sense, this team could simply be looking ahead to a 2021 season in which they spin their wheels in mediocrity.

On the other hand, "mediocrity" can win this trash division! Also, "mediocrity" would be a massive step up from the doormat status this franchise has earned over the bulk of the Daniel Snyder era. If this team can repeat as NFC East champs, they will be the first team to do so since the Eagles did it in 2003-2004. Maybe that can help nudge a culture shift forward from a team that expects to lose to one that expects to win? I believe there's some value in that, and Fitzpatrick will put the Football Team in a better position to win the division, as he will be an upgrade over Dwayne Haskins, Alex Smith, Allen, and Heinicke.

So, I guess I have mixed feelings on the Fitzmagic signing.

• CB William Jackson III: Jackson was a first-round pick of the Bengals (24th overall) in 2016 who ran a 4.37 40 at the Combine. He missed his rookie season with a torn pectoral muscle, but has only missed five games in the four seasons since then.

Jackson signed a three-year, $42 million deal ($14 million AAV), with $26 million guaranteed. That's maybe a little pricey for a corner with three career INTs and no FFs, however, Jackson does get hands on footballs, as he had 11 pass breakups in 2020, and he is a solid tackler. Jackson should be an upgrade over Ronald Darby.

• WR Curtis Samuel: The Football Team added to the receiving corps by grabbing Samuel, a former teammate of Terry McLaurin's at Ohio State. In fact, they were in the same recruiting class at OSU.

We really talked about this in the dorms freshman year🔥

They probably dreamed of playing for teams other than this one, but Washington will have to do. 😉

The 2020 season was Samuel's best as a pro. While 851 receiving yards may not pop off the screen, he caught 79.4 percent of the passes that came his way, averaging 8.8 yards per target. For those of you who have nine minutes to burn watching highlights of Samuel's 2020 season, here you go:

It is somewhat interesting that Samuel's best season in the NFL was also his only year away from Ron Rivera's coaching staff, which was in Carolina during Samuel's first three seasons.

Samuel signed a three-year deal worth $34.5 million in Washington, which might be a little on the pricey side, but he'll be an upgrade as the No. 2 WR option in their offense. He'll join a group that includes a legit No. 1 in McLaurin, an emerging TE in Logan Thomas, and a starting running back with some receiving chops in Antonio Gibson.

• WR Adam Humphries: Humphries was an undrafted free agent of the Bucs in 2015, who made the team, immediately contributed, and had a breakout season out of the slot in a contract year in 2018, when he caught 76 passes for 816 yards and 5 TDs, with... (drumroll)... Ryan Fitzpatrick.

The Titans then signed him to a four-year deal worth $36 million, which didn't work out. Injuries slowed Humphries in his two years with the Titans, as he had 60 catches for 602 yards and four TDs in 19 games. He played well in his role when healthy, but his inability to stay on the field cost him his job in Tennessee, as they released him earlier this offseason. Here's a highlight reel from his two seasons there (watch the nasty route against the Chiefs on his game-winning TD catch):

The Football Team scooped up Humphries on a one-year deal worth $1,190,000. He has familiarity with Fitzpatrick, and he can work the middle of the field with speedsters in McLaurin and Samuel on the outside. And he costs nothing. Fantastic signing.

• LB David Mayo: Mayo played for Ron Rivera in Carolina, but more recently for the Giants. JAG starter in 2019, more of a role player in 2020.

• CB Ronald Darby: After a nice season in Washington in which he was finally able to stay healthy for a full season, Darbs got a three-year deal worth $30 million from the Broncos. 😬

• LB Thomas Davis Sr.: Davis played under Ron Rivera for eight years in Carolina, and Rivera signed him last offseason to play in Washington at age 37. Every time a team hires a new head coach, it feels like that coach has to bring in one of "their guys." That was Davis last year. He didn't do much: Seven games, six tackles.

• LB Kevin Pierre-Louis: Pierre-Louis is an athletic coverage LB who is now on his sixth team in six years. He signed with Houston.

Washington was in much better cap health than the rest of the NFC East, and they capitalized on that by making a handful of signings that will make them a better football team (also a better Football Team). You can nitpick the Fitzpatrick signing, as we did above, but ultimately, this team needs to change the loser culture that has festered in Washington for a couple of decades now, and Fitzpatrick is an upgrade on what they had at quarterback.

Low bar as it may be, winning the division last year will probably help begin to change that culture, and it's a good idea to put the young players on this roster in a position to continue to taste some success in 2021. In that sense, I agree with the Football Team's aggressiveness early in free agency this offseason, and think their moves made sense both short-term, and (Fitzpatrick aside) long-term. B+.