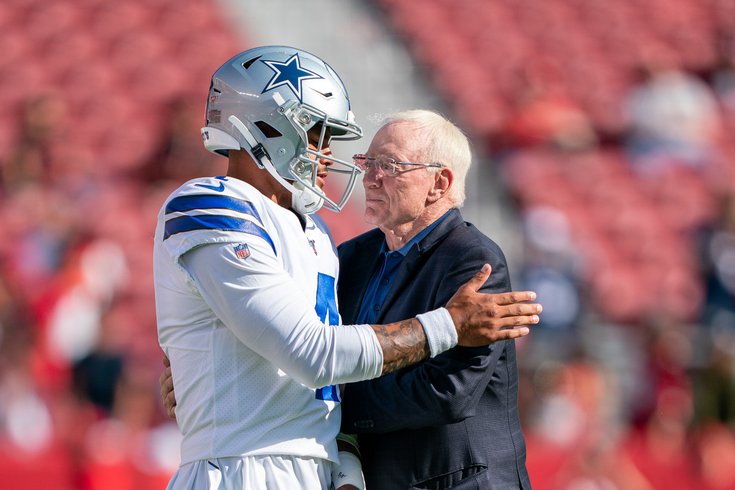 Jerry Jones and the Cowboys finally stopped screwing around and got a long-term deal done with Dak Prescott.

The Dallas Cowboys and Philadelphia Eagles entered the 2020 regular season as the favorites to win the NFC East. In fact, many (self included) believed it would be a two-horse race between them. And then, not so much.

The Cowboys finished 6-10 with a -78 point differential. They started off slowly even before Dak Prescott got hurt, then they sustained a bunch of injuries (including Prescott's season-ender) before it all fell apart. They did at least manage to have their customary late-season tease, before their eventual nail in the coffin loss, this year to the Giants.

Heading into 2021 free agency, the Cowboys were cap-constrained, as Prescott negotiations loomed, like they have the last two offseasons. Here's what they have done.

• QB Dak Prescott: The Cowboys caught the football world off guard before the start of the new league year when they agreed to a new four-year contract with Dak Prescott worth $160 million. $126 million is guaranteed, and Prescott got a $66 million signing bonus. He will reportedly receive $75 million the first year of the deal.

After playing on the franchise tag in 2021, Prescott was having an outstanding season when he suffered a serious leg injury and was lost for the year. As noted above, the Cowboys' season subsequently went into the toilet. Because Prescott held all the leverage in negotiations, there was reason to believe that he might get more than the $40 million per year he received, so in that sense, this was something of a minor win for the Cowboys to at least keep it at that number.

However, the benefits of this deal to Prescott are in the details, and they are significant. It's only a four-year deal, which means that as the salary cap increases and quarterbacks push the market even higher over the next few years, the Cowboys and Prescott will be right back at the negotiation table three years from now, when Prescott can score yet another top-of-the-market quarterback contract, since this deal reportedly will not allow the Cowboys to franchise tag him again.

Prescott was a good quarterback from Day 1 in the NFL, earning NFL Rookie of the Year honors in 2016. The Cowboys had an extremely cheap player on a four-year rookie contract at the most expensive position, by far, in the sport. They won one playoff game during that span. Now they'll have to find a way to build a roster around Prescott, who has one of the most expensive contracts in the NFL.

• CB Jourdan Lewis: Starting slot corner. Lewis is returning on a three-year deal worth up to $16.5 million, including $8M guaranteed. He's homegrown, so I get it, but that's a little pricey for an average slot corner.

• WR Noah Brown: Big, strong receiver who has offered more in the way of potential than actual production.

• LB Keanu Neal: Neal played safety his first five years in the NFL, but he will be moving to linebacker for the Cowboys. That makes sense. Neal has been a decent enough box safety over his career, but a liability in coverage against wide receivers. He signed a one-year deal worth $5 million.

• S Damontae Kazee: Kazee is small, he misses a lot of tackles, and he tore his Achilles last year. However, he's a ballhawk. He picked off 15 passes in his final two seasons at San Diego State, while playing corner, and his ability to take the football away carried over into the NFL, as he tied for the league lead in interceptions in his first full season as a starter in 2018, with seven, while playing safety for the Falcons. He followed up that season by picking off three more passes in 2019.

Over the last six years, the Cowboys have been woefully inept at intercepting opposing quarterbacks.

Kazee can maybe help in that department if he can recover fully from his injury.

• OT Ty Nsekhe: Huge OT (6-foot-8, 330) who toggled between the arena league and the NFL during the early portion of his career, but has managed to stay employed in the bigs since 2015. He's now 35 years old, but can still be a serviceable and versatile reserve. The Cowboys had major injury issues at OT last season, and they lost their best backup OT in Cameron Erving.

• DE Tarell Basham: Basham has more upside than the two defensive linemen below, as a rotational edge rusher. 36 tackles, 3.5 sacks, three FF for the Jets in 2020. Two year deal worth up to $6.5 million will be enough to cancel out a comp pick for one of the players the Cowboys lost in free agency.

• QB Andy Dalton: Dalton signed with the Bears on a one-year, $10 million contract that has a max value of $13 million. If he doesn't get canceled out in the comp pick formula, the Cowboys should land a fourth-round pick for losing him.

Dalton was a good backup, and the price was right for the Cowboys last season. With Dalton moving on, their remaining backup quarterbacks are Cooper Rush, Garrett Gilbert, and of course, Ben DiNucci, none of whom are as good as Dalton.

• DE Tyrone Crawford: Crawford's contract has been an albatross on the Cowboys cap for about a half decade. He retired.

• CB Chidobe Awuzie: Awuzie missed a big chunk of the season last year with a hamstring injury, and wasn't very good after his return. In his first three seasons, he was a solid-but-unspectacular corner. He signed a three-year, $21.75 million deal with the Bengals.

• OT Cameron Erving: Serviceable backup OT for the Cowboys last year after a slew of linemen got hurt.

• DE Aldon Smith: Technically, Smith hasn't signed anywhere yet, but the Cowboys reportedly won't be bringing him back. This is where I'll note that Cris Collinsworth slobbered all over Smith for four hours Week 1, saying that he could finish with 15 sacks. He fell 10 sacks short of that projection.

In 2020 free agency, the Cowboys lost a number of their productive defensive starters, like CB Byron Jones, DE Robert Quinn, and DT Maliek Collins, to go along with some losses on the offensive side of the ball, most notably C Travis Frederick. Their low-level additions -- guys like Dontari Poe and Ha Ha Clinton-Dix -- did not pan out.

In 2021, they didn't have to worry about losing any overly important players, but once again, they also didn't really add any either. Part of that is because Prescott is no longer on his rookie contract, and the Cowboys' spending ability just isn't there.

Over the last two weeks, while I believe that the Giants overpaid for some of their big-ticket free agents, and the Football Team took more of a win-now approach when their roster doesn't quite yet dictate that (we'll get to both of those teams soon), the bottom line is that in 2021 free agency they both got better, while the Cowboys did not. C-.