What they're saying: Eagles eyeing veteran CB in free agency, may go defense in first round of draft 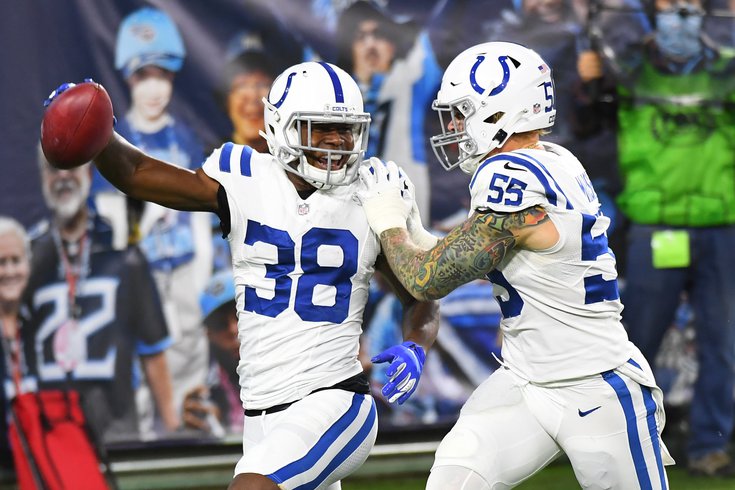 The first wave of NFL free agency is over — and, honestly, the second wave has nearly passed too as we sit in a swell waiting for the tsunami that is the NFL Draft less than a month from now. And it's beginning to look more and more fortunate for the Eagles that they have a ton of draft picks.

That's because, as we stand right now, the Birds still have a ton of holes to fill. And where they don't have "holes," they could certainly use upgrades. But that's what happens when you finish a season 4-11-1 and turn over nearly the entire coaching staff. New coaches, new systems, and as a result, new players.

While there was a lot of belief that the Eagles were going to go offense with their first round pick, whether that be a new weapon for Jalen Hurts or perhaps a QB to replace him, that changed quickly late last week when the Eagles traded back from the sixth pick to the 12th, a move that shocked many but also allowed general manager Howie Roseman to add a few more picks to his arsenal in an effort to increase the odds that he hits on at least one.

Now, while the Eagles could still see a top wideout fall to them or opt to add some offensive line help to a group that is rapidly aging, it seems increasingly likely that'll they'll look on the other side of the ball, perhaps at cornerback or linebacker.

After all, cornerback has been one of the team's biggest needs all offseason and they've done little to address the position. They still could add someone in free agency — and likely will simply because they need bodies (more on that in a bit) — but there are some big-name defensive backs who should still be available with the 12 pick.

Let's get right into it with our latest edition of What They're Saying...

Over at ESPN, their NFL Nation staff took a look at the biggest move so far, as well as the biggest question left to be answered, for all 32 NFL teams. And, given the Eagles lack of moves, the Anthony Harris signing is certainly the biggest to this point. But it's the last section here, where Tim McManus discusses the Eagles' CB options opposite Darius Slay. Right now, it's a whole lot of nothing, especially if they (rightfully) move Avonte Maddox back to the slot.

For starters, he says the Birds should be able to find a veteran free agent at a discount, but he also outlines some of their top options with the 12th pick...

Offseason goals: The Eagles needed to fill out the quarterback room after trading Carson Wentz and took a step in that direction by signing Joe Flacco to a one-year deal. He provides a veteran presence for projected starter Jalen Hurts. Defensive coordinator Jonathan Gannon is expected to put a heavy emphasis on the secondary, which needed upgrades at multiple positions. By signing Harris (one year, $5 million), Gannon gets a proven playmaker who can line up at multiple spots. Harris played under Gannon in Minnesota. That should make for a smooth transition into his system.

Biggest question to be answered: Who will play cornerback opposite Darius Slay? The good news for the Eagles is there are a number of notable free-agent corners who remain unsigned, including A.J. Bouye, Steven Nelson and Casey Hayward. They should be able to find a quality player at a discount. They could also use the No. 12 overall pick on a cornerback such as South Carolina's Jaycee Horn. Philadelphia needs to add a third quarterback. Florida's Kyle Trask makes sense as a midround pick. -- Tim McManus  [espn.com]

This next nugget comes from ESPN's Todd McShay, via Glenn Erby of The Eagles Wire.

McShay said the Eagles will now be focused on defense in the first round of the draft, and he isn't limiting that to cornerback. He thinks Penn State linebacker Micah Parsons is the best defensive player in the draft. They don't invest a lot in the position (I know, broken record) but if you have the chance to get the best defensive player in the draft, as McShay calls him, then you should go and make that move.

In addition to moving Genard Avery to linebacker, the Eagles drafted a pair of them last year, but neither saw any significant playing time. They could develop into players, but if you can get a guy like Parsons, you take him and figure out the rest. Here's more, courtesy of The Eagles Wire...

During a recent live stream on ESPN’s YouTube channel, draft insider Todd McShay had an interesting point of view in regards to Philadelphia now transitioning to strengthening their defensive side of the ball.

McShay said he believes the Eagles’ focus could shift to the defensive side of the ball at No. 12 overall.

“I think the focus for Philly now shifts to the defensive side, and the focus becomes, go get the best defensive player available. If it’s a corner, then it’s Patrick Surtain from Alabama, and if not him then it’s Jaycee Horn from South Carolina, or Caleb Farley, the corner from Virginia Tech.

“And also keep in mind, they have linebacker needs. Micah Parsons, in my opinion, is the best defensive player in this year’s draft class. He ran in the 4.3s, he’s 6-3, he’s 246 pounds, and he’s so explosive as a pass rusher, cover guy, and sideline-to-sideline run defender. I think it’s probably going to be one of those four guys, at corner or linebacker, who they pick at No. 12.”  [theeagleswire.usatoday.com]

Adam Caplan and Geoff Mosher | Inside the Birds

According to Adam Caplan of Inside the Birds, the Eagles have interest in veteran cornerback T.J. Carrie, who spent last season with the Colts and could be a cheap addition to new DC Jonathan Gannon's defense. Here's more from his recent livestream with co-host Geoff Mosher...

CAPLAN: "When you look at the Eagles situation at corner on the outside, it's just awful other than [Darius] Slay. [Avonte] Maddox has got to be their slot corner. So again, they need to enter training camp — they have to add three corners on the outside, whether it's two in the draft or two in free agency, one way or the other. T.J. Carrie is a guy I understand they have some interest in. He's a hybrid, he could play safety — he played safety with the Raiders — he could play corner. He's more of a dime/nickel [cornerback]. I think you had said you expect them to play a lot of nickel — you think they're going to be a heavy sub team."

MOSHER: "Heavy nickel and dime, as I understand it, which is kind of where everyone is going anyway, but yeah."

What Carrie would bring

So, what exactly would the Eagles be getting in Carrie? When Caplan reported that Carrie was visiting the Saints, the crew at Stampede Blue, the Colts SB Nation affiliate, broke down Carrie's 2020 season, which was apparently the best of his career.

He came cheap last season, and even though he's coming off a successful season, he shouldn't cost the Birds much if they look to add him. He might not be a starting-level option for the Eagles, but he can certainly help.

He was a revelation at cornerback for the Colts, having signed a 1-year, $1.05M deal.

Appearing in 15 games (2 starts), Carrie recorded 32 tackles (25 solo), a tackle for loss, 8 passes defensed, 2 interceptions (including one returned for a touchdown), and a fumble recovery this past season.

In coverage, he was targeted 42 times for an allowed 24 receptions (57.1% completion rate), 347 receiving yards, 2 touchdown receptions, and 2 interceptions.  [stampedeblue.com]

There are also some other, more familiar free agent options for the Eagles. According to Mike Kaye of NJ.com, there are seven Eagles free agents who remain unsigned, including two cornerbacks. Would either make sense for Philly?

Should the Eagles bring him back? Yes

LeBlanc wouldn’t cost more than the veteran minimum to bring back. He’s a solid special teams gunner and a decent backup corner in the slot. While he hasn’t been able to stay healthy, his low cost and experience should appeal to the Eagles.

Should the Eagles bring him back? No

Robey-Coleman was a disaster last season. While he came into Philly with a strong reputation, last season was extremely disappointing. Clearly, his interest is low on the market as a result.  [nj.com]