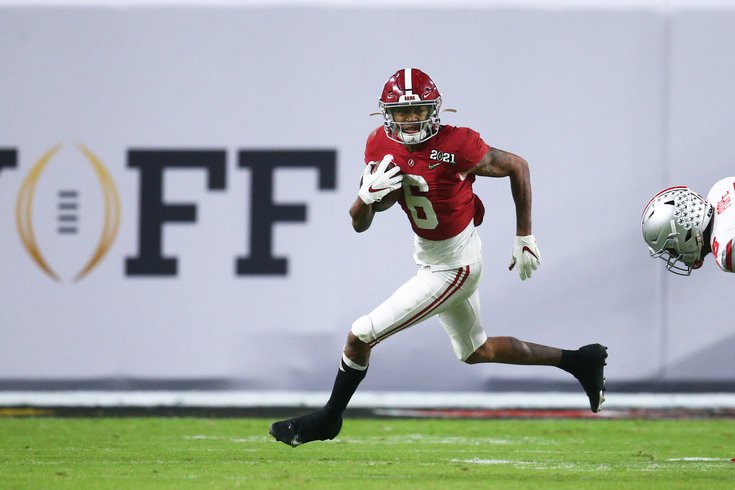 Before the Philadelphia Eagles traded back from pick No. 6 to pick No. 12, mock drafts commonly had them picking a wide receiver, whether that be LSU's Ja'Marr Chase, or either of the two Alabama receivers, DeVonta Smith or Jaylen Waddle.

Now that they have moved back to pick 12, there's a pretty good chance that at least one of those three receivers will still be available. How's that, Jimmy? Glad you asked. Let's unpack it.

With the San Francisco 49ers moving up from pick No. 12 to pick No. 3, we're all on the same page that they're going to take a quarterback, right? So on that premise, the top three picks are likely to be quarterbacks:

Let's go team by team thereafter and first look at their wide receiver depth charts, followed by analysis on whether they're likely to take a receiver or not:

• Pick 4, Falcons: Atlanta could be shopping for an eventual replacement for Matt Ryan. But even if they don't go quarterback, they already have Julio Jones and Calvin Ridley. Their No. 3 receiver, Russell Gage, had 72 catches for 786 yards and 4 TDs in 2020. Highly unlikely to take a receiver.

• Pick 5, Bengals: Tee Higgins had a good rookie season and Tyler Boyd is a nice No. 2, but the Bengals could certainly use another receiver, and Joe Burrow would love to have old LSU friend Ja'Marr Chase with him in Cincy. However, Burrow took a beating last year before he was eventually lost for the season with a torn ACL. They have to prioritize protecting him. Moderate chance the Bengals draft a wide receiver.

• Pick 6, Dolphins: DeVante Parker and Will Fuller are both in Miami on moderately priced contracts. They also have Preston Williams, who was having a decent year before being lost for the season with a foot injury. Moderate chance the Dolphins draft a wide receiver.

• Pick 7, Lions: Marvin Jones and Kenny Golladay are both gone, and frankly, it was difficult even deciding who their top three receivers are currently. The Lions are clear threats to take a receiver.

• Pick 8, Panthers: D.J. Moore and Robby Anderson both went over 1,000 yards for the Panthers in 2020, and they added David Moore (35-417-6 with Seattle last year) in free agency. They also have far bigger needs, namely quarterback and offensive line. Unlikely to take a receiver.

• Pick 9, Broncos: Courtland Sutton had a great first two seasons in 2018 and 2019, before tearing an ACL in 2020. He'll be back, and the Broncos also drafted Jerry Jeudy and KJ Hamler in the first and second rounds last year. Highly unlikely to take a receiver.

• Pick 10, Cowboys: The Cowboys weren't expecting CeeDee Lamb to fall to them last year, but when he did, they said, "Screw it, let's take him." That made sense last year. It wouldn't make sense to take a fourth receiver at pick No. 10 this year. Highly unlikely to take a receiver.

• Pick 11, Giants: The Giants paid bigtime money to Kenny Galloday and took a flier on John Ross in free agency, and they already have good pass catching weapons in Darius Slayton and Sterling Shepard. Highly unlikely to take a receiver.

And for good measure, if you look at the the teams immediately behind the Eagles in the draft order, you have the Chargers (Keenan Allen, Mike Williams) at 13, and the Vikings (Adam Thielen, Justin Jefferson) at 14. They would both be extremely unlikely to trade up for a wide receiver.

Assuming three wide receivers don't go in the top 7 picks (that feels like a pretty safe assumption), one of Chase, Smith, or Waddle should still be available.