Eagles mailbag: Andre Dillard's trade market, and why move from 6 to 12 now? 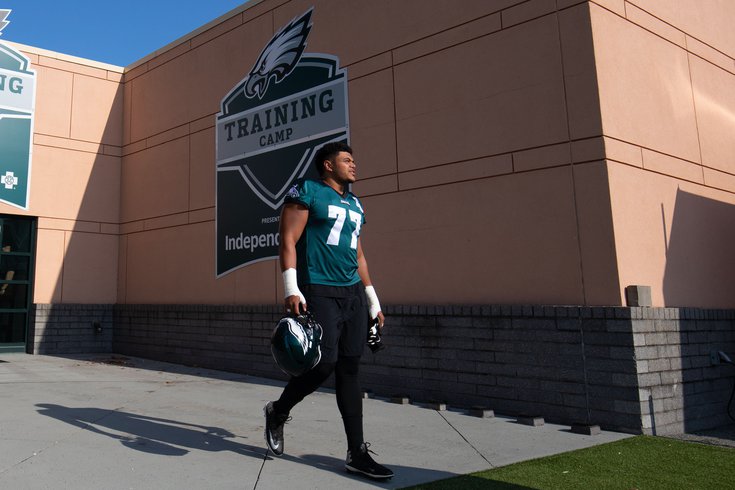 In our Eagles chat on Sunday, there were a lot of questions that we could not get to in time or other questions we did answer but could use more color. And so, let's do a mailbag post to answer some of the overflow, as well as some commonly asked questions on Twitter and via email.

Question from Chris: What is Dillard’s value in a trade? With Jordan Mailata's age and potential, it seems like a no brainer to start him over Dillard. Could Dillard start grooming for RT when Lane is ready to call it quits?

I do think the Eagles would like to salvage some kind of draft pick in return for trading Dillard, if they could. However, it'll cost more to trade him than to just keep him, so they'd have to get something worthwhile in return. Fourth-round pick in 2022? I think that would be the best they could hope for. Personally, I wouldn't give up anything of value for Dillard if I were some other team, even if I needed a LT.

The guess here is that he's back on the roster in 2021, as the backup LT. Keep in mind that Mailata has a history of back injuries, so they may need Dillard at some point this season, even if Mailata wins the starting job. Maybe if Dillard shows some positive signs if he has to play, he can improve his value, and they can deal him in 2022 if it still makes sense to do so? But right now, I can't imagine Howie is getting a bunch of calls on him.

Question from Sterling: Doesn't this trade back make it less likely that the Eagles get a player who could be a star, not to mention they draft right after the Cowboys and Giants, who could potentially draft a star player before the Eagles? This would not look good optically to the Eagles fan base.

On the first point, yes, given the chance to be drafting at 6 vs. 12, you're going to choose to pick sixth. #Analysis. The Eagles would have something closer to "the pick of the litter" so to speak among the positional players, assuming four quarterbacks go in the top five picks. So sure, the odds increase that a star player is more likely to be had at 6 than 12.

However, in this particular draft, I don't think the positional player talent is super strong at the tippity top of the draft. There are no Chase Young-level prospects, no Von Millers, no Bosas, no Myles Garretts, no Jalen Ramseys, etc. I really don't think the player the Eagles would get at 6 this year is substantially more appealing than who will be available at 12. Ja'Marr Chase is a nice prospect and all, but would I take a first round pick in 2022 to make up for the difference between him, and sayyyyy, DeVonta Smith or Jaylen Waddle? Hell yes I would. And that's assuming Chase is even still on the board at 6.

As for picking behind the Giants and Cowboys, who cares? Over the last four years, the Giants have the worst record in the entire NFL. The Cowboys have won three playoff games in the last 24 seasons. If I'm the Eagles, I'm making decisions based on what is best for my team. I'm not being guided by the optics of one of those two teams taking a player I could have had at 6.

Question from Max: Do you think the Eagles are done trading in the 1st round? Why else make the deal with Miami now? I feel like if they waited even until they were on the clock they could have forced more out of Miami.

Certainly, it wasn't as if the Dolphins traded with the 49ers, and then called the Eagles and said, "How does this sound?" and a deal was consummated minutes later. Obviously, a lot of thought was put into this move by the Eagles.

So I guess what I'm getting at is that this deal very likely had other moving parts to it, and might not have been available later if they didn't take it now.

Question from Gio: Why did the Dolphins trade back up? Ja’Marr Chase?

As we pointed out on Monday, the Eagles will very likely have their shot at one of the top three wide receivers in the 2021 draft at pick No. 12. The same probably would have been true for the Dolphins, so I don't think that trading a 2022 first round pick for the upgrade from Smith or Waddle to Chase would have been worth that price to Miami. Plus, there's a decent enough chance that the Bengals will take Chase at 5, so I don't think the Dolphins would make that move back up there for a player who might not even be available.

The guess here is that they're thinking offensive line. At least one of Penei Sewell or Rashawn Slater will still be there at 6.

Question from rbastian: The Eagles haven’t drafted a player from Alabama since 2002. Is this the year the streak ends or is there more to this than coincidence?

Ah, yes, Freddie Milons is the answer the the trivia question you may have in your head. Wide receiver, fifth round, that year. Anyway, yeah, it's a very weird phenomenon. This year there's as good a chance as ever that the Birds go with a Bama guy, whether that's Smith, Waddle, Patrick Surtain, or (highly unlikely, but non-zero chance) Mac Jones. There are also plenty of guys that would make sense in Round 2, like Landon Dickerson or Christian Barmore.

Question from Cesar: Jimmy, who's your “outside the box” guy at 12? The one no one is talking about.

Over the weekend we published a list of 10 prospects who should still be available for the Eagles at pick 12. I'm a little mad at myself for not including Georgia edge rusher Azeez Ojulari. If I could get a mulligan on that, I'd have Ojulari in there, and Jaelen Phillips out.

The reason I didn't have Ojulari in there is because of his size. 6-foot-2, 249 pounds, though he does have long arms. Still, can he play DE at that size? Does he lose explosiveness if he gets bigger? So those would be my concerns, but he's a very good player. If the Eagles were running a 3-4 defense, I'd have him on that list all day. Because we don't know exactly what kind of defense Jonathan Gannon will be running, I wouldn't rule Ojulari out.

Question from GoBirds: Better move of this off-season: This deal for the 12th pick or the Carson Wentz deal?

I liked the move back from 6 to 12, if that isn't clear already from what you've read above. The Wentz deal, at its core, represents an organizational failure. There are no gold stars to be given out for that situation, in any way.

Question from BOE: Am I nuts for not wanting anything to do with Russell Wilson? He is great, but he is 33. Let’s say he has 5 good years left, which is a generous assumption. A great QB on a bad team that gave up a ton of draft capital to get him and therefore can’t put talent around him would disastrous. Watson is a different story because of his age.

I can't argue with anything there, and agree that Wilson doesn't make a lot of sense for the Eagles, aside from their decade of regret for not taking him instead of Vinny Curry in the second round of the 2012 NFL Draft. Watson's legal issues will have to play out, but if he is no longer radioactive next year, he is clearly the more appealing player, for the reasons you mention.

Question from FA: Do you think the Birds make any more free agent signings? Couldn't someone like Gareon Conley probably be had on the cheap?

I am indeed a little surprised they haven't signed a cornerback yet. I'm also surprised Conley is still available. There must be injury and/or personality concerns there.

Question from Tyler: Which new coach outside of the HC and coordinators do you think will have the biggest impact on the team this year?

I feel like the quarterbacks coach isn't too far behind either coordinator spot, in terms of importance. And for this team specifically, obviously how Jalen Hurts evolves in 2021 will be a major factor in how the franchise moves forward in 2022 and beyond. So I'd go with Brian Johnson.

Question from Frank: Do you think the Eagles draft a safety at some point? Or are they set now that they signed Harris?

They have 11 picks, so I think that any and every position is a possibility, ha. But yes, I think it's more likely than not a safety is taken at some point.

Question from Michael K: Advice on a jersey? I think my 86 is about to be retired, and I’m the kind of guy that’s superstitious about wearing someone currently on the roster. It seems there aren’t many locks to be rostered in a few years time, with so many players either over 30 or unknown.

So it feels to me like you're looking for a player who is likely to be on the roster for a while, and obviously who is, you know... good. The pickings are slim!

I would probably recommend Miles Sanders, because at least we know he's good. He'll be on the team for another two years, at a minimum, and while there is debate over whether to give a running back a second contract, (a) the Eagles picked him in the second round, and (b) he has extremely low mileage compared to other second contract running back busts in recent years. So I wouldn't rule out that possibility.

I think another good choice if you don't mind having to spend more money in a couple years would be a Brandon Graham appreciation jersey.