Ever since the Philadelphia Eagles won their first Super Bowl, they have drafted poorly, they have missed in free agency, and they have made some truly awful decisions on contract extensions for players already on their roster.

We saw the result of all of that on the field in 2020, when the team went 4-11-1 in what has to be considered one of the worst seasons in franchise history. Subsequently, the Eagles' 2021 free agency period was destined to become a tear-down, or perhaps better stated, time to pay the bill, as the team was like eleventy billion dollars over the salary cap.

As expected, the Eagles restructured the contracts of a slew of aging players, kicking the can down the road into future years, while also jettisoning a bunch of big-name players, including the unhappy, unaccountable franchise quarterback.

What's left is a roster that isn't realistically going to compete for a Super Bowl for quite a while. Let's look at what they did in free agency.

What's an exclusive rights free agent, Jimmy? The short-short version is that they are players with two or fewer accrued seasons whose contracts have expired. If their current team tenders them, they cannot negotiate contracts with other teams, and their current team can retain their rights while paying them a small amount of money on a one-year contract. Assuming Singleton, Scott, and Ward earn accrued seasons in 2021, they'll be restricted free agents in 2022.

It was a no-brainer to bring all three players back at next to nothing.

• DT Hassan Ridgeway: The Eagles initially acquired Ridgeway from the Colts for a seventh-round pick during the 2019 NFL Draft. Ridgeway previously played under defensive coordinator Jonathan Gannon for one year in Indy in 2018. Ridgeway has been a decent rotational defensive tackle when he has played, but he has missed 29 games the last three years, including 18 with the Eagles over the last two.

In 14 games with the Eagles, Ridgeway has 19 tackles (6 for loss), 3 sacks, and 5 QB hits. Ridgeway will only count for $950K on the cap, which is fine on the surface, however, the risk in signing him is that if he makes the roster and the team is relying on him to produce in a rotational role, they will have to replace him with a guy off the street if he gets hurt again mid-season.

• S Anthony Harris: After Harris had a standout season in 2019, when he had a share of the NFL's lead in INTs, the Vikings franchise tagged him during the 2020 offseason, and he made $11,441,000. Had the Vikings tagged him again, it would have been 120 percent of that total, or $13,729,200. They made the obvious decision not to do so. After a less impressive 2020 season, Harris clearly did not find a strong market for his services during free agency this offseason, as the Eagles were able to land him at a reasonable cost of $5 million on a one-year deal.

The Eagles had a severe need at safety heading into this offseason, with Jalen Mills heading to New England on a four-year deal, and Rodney McLeod unlikely to be ready for the start of the 2021 season. Harris will obviously be an immediate starter.

One downside is that he will turn 30 in October, which is not ideal for a team in rebuild mode. Still, he's a good player at a bargain price.

• QB Joe Flacco: The Eagles signed Flacco to a deal worth $3.5 million guaranteed, with up to $7.5 million in incentives, which, just, ew. Yes, the Eagles needed a backup with Jalen Hurts currently serving as the only quarterback on the roster, but paying him anything more than the league minimum (or something close it) was absolutely baffling.

In 2020, the New York Jets paid Flacco a mere $1,562,500 on a one-year deal, and he proceeded to go 0-4 as a starter, with a QB rating of 80.6. The notion that he will now be getting a 224 percent increase in pay from the Eagles a year later, all of which is guaranteed, plus incentives that could drive the price up to $7.5 million, is simply laughable for a team that has already essentially admitted that they they will not be serious contenders in 2021.

Obviously, the Eagles saw something they liked from Flacco that caused them to pay him significantly more than it would have cost to sign a veteran on a near-minimum deal for a guy like Mike Glennon, or Matt Barkley, or simply re-signing Nate Sudfeld for next to nothing, or (fill in any other still-available quarterback here). After reviewing Flacco's four starts in 2020, I do not see whatever the Eagles saw.

Flacco has had a good career in the NFL, as he has compiled a career record of 98-77, mostly with a strong Ravens team. When his career concludes, he won't quite make it to Canton, but he's a lock for the Ring of Honor in Baltimore.

If the Eagles were poised to be a contending team in 2021 and they really liked Flacco at this stage of his career for some reason, then you could maybe squint and find some merit in paying him this kind of money. But in a rebuilding season, and barely any room at all under the salary cap, this is a pretty indefensible and illogical signing.

• S Andrew Adams: Adams was originally an undrafted free agent of the Giants out of UConn, who eventually landed with the Bucs and went along for the ride on their Super Bowl run. He also spent a training camp with the Detroit Lions in 2019.

Over his five year career, Adams has played in 73 games, with 32 starts. He has 166 tackles, 6 INTs, and 19 pass breakups. While Harris will clearly start, Adams is likely just a depth player who will have to earn a roster spot in training camp.

• WR Alshon Jeffery: Jeffery was a good addition in 2017 when a strong market didn't materialize for him in free agency, and the Eagles were able to sign him to a reasonable one-year deal worth under $10 million. After a productive start to the 2017 season, Jeffery was rewarded with a four-year extension worth $52 million, and he helped the Eagles win a Super Bowl.

And then it all went downhill. He infamously anonymously badmouthed the starting quarterback in consecutive years in 2018 and 2019, and he was not the same player on the field, particularly in 2019. Just before the start of the 2019 season, the Eagles made the egregious error of guaranteeing Jeffery’s 2020 salary in exchange for a small pay cut. It's hard to fathom what the Eagles were thinking, as the benefit was not remotely close to the potential downside.

As it turned out:

• WR DeSean Jackson: Jackson is one of the best deep threats of all time, and his initial tenure with the Eagles yielded a lot of exciting moments, before he was unceremoniously released by the team in 2014.

By releasing Jackson, the Eagles incurred $5,802,000 in dead money charges on their 2021 cap. He has since signed with the Rams.

• DT Malik Jackson: Jackson was a decent starter in 2020, but his tenure in Philly will go down as a pretty big disappointment overall, as he had 2.5 sacks in two seasons after signing a three-year deal worth $30 million during the 2019 offseason.

Jackson has since signed with the Browns.

• S Jalen Mills: In five years with the Eagles, Mills played in 63 games, starting 49. Objectively, he was a great pick in the seventh round of the 2016 NFL Draft. He was a starting cornerback for the Super Bowl winning team in 2017, and played well throughout that playoff run.

As a free agent in 2020, Mills re-signed with the Eagles on a one-year deal worth $4 million, so it's somewhat surprising that he was able to score the kind of deal he got with the Patriots after an unimpressive 2020 campaign. It's worth noting that the Patriots highly value versatility all over their defense, which makes Mills a nice fit for them.

Mills is a legitimate NFL starter, however, in his first five years in the NFL he was often tasked with responsibilities beyond his capabilities. For much of his first four years in the league, he was the Eagles' No. 1 corner. In 2020, he was replacing a do-everything playmaking safety in Malcolm Jenkins. Neither role was ideal for a player of Mills' skill set, but to his credit, he always craved any and every difficult challenge, and attacked them with the mindset that he was the second coming of Ronnie Lott. The bet here is that Mills will become a more appreciated Eagles as time passes.

• DE Vinny Curry: Curry signed with the Jets. He'll be part of their DE rotation. I figured at his age that he'd end up with a contender. Apparently not.

• LB Nate Gerry: Gerry had one of the worst seasons an Eagles starting linebacker has ever had, and he's also recovering from a serious injury. He signed with the 49ers.

• LB Duke Riley: Riley doesn't have any plus skills as a linebacker, whether that be in coverage, against the run, or as a blitzer. He was also probably a little overhyped as a special teams player.

• S Rudy Ford: Ford was a special teamer and backup safety who actually started at corner during the Eagles' Week 17 game against the Football Team in 2020. Ford showed some glimpses that he is good on the kick/punt coverage units, when healthy, after a season in 2019 in which he was a penalty machine.

• P Cameron Johnston: Johnston did not have a good season in 2020, and his restricted free agent tender amount would have been $2,240,000 this season, which the Eagles were correct not to pay. He signed with the Texans. The Eagles do have another punter on the roster. That would be Arryn Siposs.

At some point, the Eagles are highly likely to either trade or release Zach Ertz, and they're also likely to add some Band-Aid corner on a one-year deal. Otherwise, a snapshot of the gains and losses: 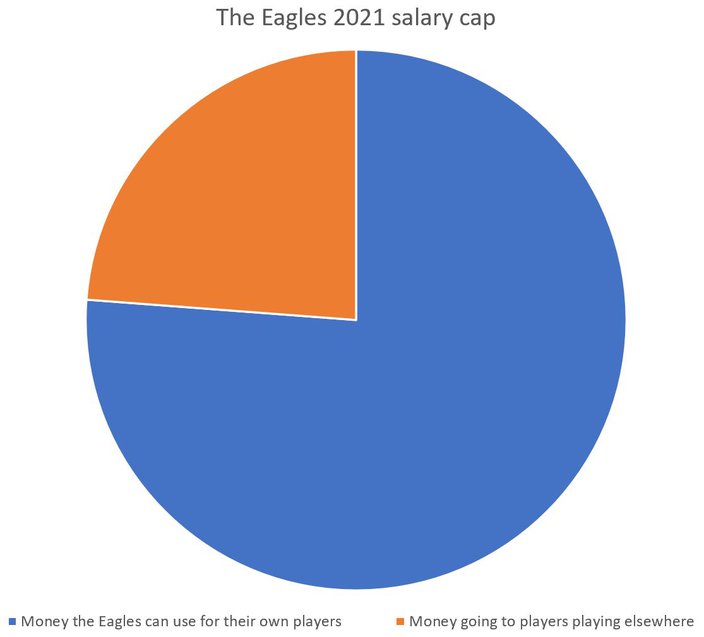 Oh, and you can go ahead and tack on another $7,769,500 in dead money whenever they trade or release Ertz. At this point, they're maybe just waiting until after June 1 to move on from Ertz, which will allow the team to push some of that pain into 2022.

All told, the Eagles signed a couple of safeties, they added a veteran backup QB on a strange deal, and they'll probably still add a Band-Aid corner, and/or maybe a linebacker. Whatever. This free agency period wasn't about that. It was more about facing the music after a three straight years of front office mismanagement. F.