The Eagles, that Russell Wilson trade rumor and the problem with anonymous executive sources 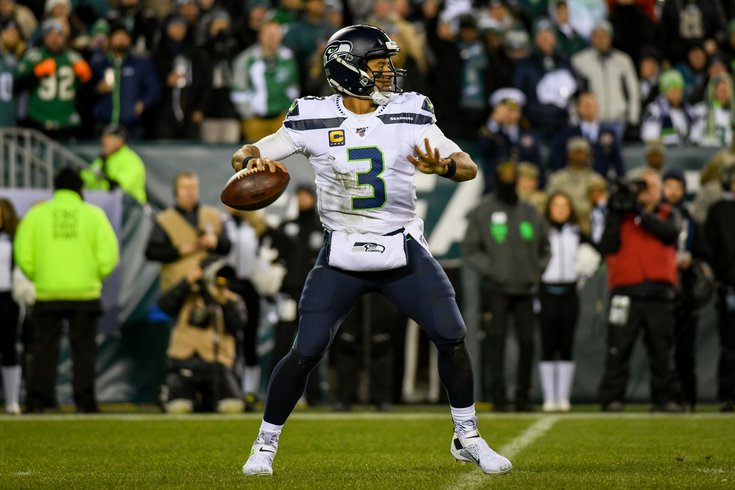 As the NFL offseason rolls on with anything resembling real football still over five months away, there's plenty of time to discuss everything that's happened — and will happen — in the time between when the Bucs beat the Chiefs in the Super Bowl and when the 2021 season kicks off on September 9.

There will be analysis and grades — Jimmy Kempski's Eagles grades will be coming out shortly — as winners are crowned and losers are laughed at. Predictions will also be made. So many predictions. And we're not just talking about wins and losses and award winners.

With each passing season, the NFL is becoming more and more like some of its fellow professional sports leagues, especially the NBA and MLB, who see almost as much attention paid to the transactions as to the final outcomes of games. And with the rise of anonymous sources and single-source reporting, especially when it comes to trades and free agent signings, there seem to be more leaks than ever — and more incorrect predictions than ever before. Remember just last month when a Zach Ertz trade was imminent? Or a month earlier when Carson Wentz was getting traded to the Bears?

That's not a slight on the reporters passing along those rumors, it's just a reminder of how much misinformation is being spewed behind the scenes, often with ulterior motives in mind, and how in a 24-hour news cycle that increasingly feels like it lasts far shorter, being wrong isn't the worst thing, because a new rumor will rise up and replace yours by the time you wake up the next morning. It allows for journalists to be much more liberal with the information they share than they were even five years ago.

This is probably the part where you're saying, "But, Matt, you write about these very rumors all the time. Aren't you just as guilty?"

And to that, I say, you aren't wrong. At least not entirely. We always try to put rumors in context and provide complementary information about not just the player involved, but also the likely source of the information and whether or not we believe there's much truth to it. We're not always right — largely because what we're doing amounts to a lot of guesswork unless we have inside information of our own, which is certainly the case sometimes even if we don't explicitly state it because it was told to us off the record.

But there is a new kind of rumor, a new source that has become almost ubiquitous in sports coverage: the anonymous executive. And it's a dangerous* one.

*Perhaps the only one worse is the anonymous scout giving his hot-take evaluation of a player, with a new one seemingly stirring up controversy every year.

For starters, by qualifying that a given source is an executive (whether that's with a team or with the league), you are already seeding credibility in the mind of the reader. This guy is pretty high up, so he must know what he's talking about. It also assumes that a rival team's executives have the slightest clue about your team's plans, which wouldn't be the case if your GM was any good at his job. Since he's a GM, he must know what other GMs are up to. And finally, it makes it easier for a reporter to get a little white lie past you without ever knowing, because there's nothing saying that the anonymous executive isn't talking about his own team. Why would a GM be giving inside information on his own team? It has to be coming from somewhere else. Of course, that's exactly what they'd want you to think.

That puts the onus on the readers to try to decide what's real and what's not. Unfortunately, that used to be the job of the journalist, but now, with more and more people taking to twitter as amateur reporters, it's increasingly difficult to spot the difference between real information and misinformation — I say misinformation because it's worth wondering why a member of any front office would just hand privileged information over to a reporter without getting something out of it, whether that's a quid-pro-quo or, more likely, it's because it's information they actually want out there in public.

And teams are getting really good at making it this way. In fact, it might be the thing that Eagles general manager Howie Roseman is best at. When you first mention his name, people think salary cap guru, but that isn't his biggest strength. Not cap management, not talent evaluation and certainly not drafting. It's actually media manipulation — and the fact that the salary cap is the first thing you think of when you hear is name is further proof of just how good he is at working the media (which, despite everything I've just said, is a trait that every fan should want in there GM, because some of that misinformation eventually makes it way to rival teams, even if it makes it more difficult for the average fan to know exactly what's going on within the organization).

Is there really a mandate to build around Jalen Hurts? What really led the Eagles to pulling the plug on Doug Pederson and Carson Wentz so soon after winning a Super Bowl? And is there some bigger plan in the works after trading back in the draft?

The way the Eagles operate, it's almost impossible to know the answers to any of those questions, especially since a case can be made, for example, that Roseman was both the source behind the "build around Hurts" report and the voice denying such a mandate was ever made when he publicly spoke last month.

And it brings us back to our reason for writing this story today.

You've likely already seen the headlines about the Eagles being "in the driver's seat" for Russell Wilson, should he be made available via trade. Those reports came from a lengthy story over at The Athletic by NFL insider Mike Sando in which he spoke to league executives and evaluators about the NFL offseason so far. There's a sizable writeup on each team and a lot of information shared by those anonymous sources.

In the section covering the Eagles, Sando wrote the following about the team's trade back from sixth to 12 in this month's NFL Draft and what it might mean going forward now that they could have three first-round picks next year.

That ammunition isn’t going to help the Eagles this season, which is probably the point.

“All they’re doing is stockpiling picks for next year, so they can get weapons for Jalen Hurts or acquire one of the top two overall picks to draft a quarterback,” an exec said. “And I would put Philly in the driver’s seat for Russell Wilson next year if Seattle moves him. That would have Howie Roseman written all over it.”

Roseman, the Eagles’ GM, has not hesitated making expensive trades up the draft board to select a quarterback. He also hasn’t hesitated paying large salaries at the position, whether for Sam Bradford, Carson Wentz or even backups.  [theathletic.com]

Sando's source is hardly the first to mention the Eagles' potential interest in Wilson, as the Inquirer's Jeff McLane has twice mentioned Wilson's name as it pertains to the Birds (here and here), as has our own John McMullen. There's been talk about Deshaun Watson recently as well, but given that a new lawsuit against him seems to materialize every day, it doesn't seem like a trade is likely any time soon.

Beyond all of this, there's the question of what this quote actually means, in real world terms. What is this anonymous executive actually saying? Breaking all down, it amounts to this: "The Eagles have more to offer than almost any other team and Howie Roseman likes to make a splash, so it wouldn't be surprising if they make a play for Wilson."

That's pretty much it. But is that anything different than what writers like McLane, McMullen and many others have been writing since the big draft trade went down? Or what some were even writing before that? No, but because it came from an anonymous executive, it suddenly carries more weight.

This is not a knock on Sando for using anonymous sources — his story was enlightening so long as you don't take every quote at face value and he did a good job at several points putting those quotes into context. Rather, this is a statement on how we as readers digest this information and how we as a society are more likely to take the word of a nameless, faceless person in a position of authority over almost anyone else, including those who aren't hiding behind anything.

And we rarely ever ask the most important questions, like: Why is this source giving up this information?  Who stands to gain the most from this information being out there? And what other teams does this potentially impact?

If you're able to reason out the answer to all three of those questions — and it's not easy — then you can likely trace the genesis of any rumor. The issue is that teams (and reporters, especially the good ones) are quite skilled at concealing the answers to not one or two of those questions, but all three.

And when it comes to this specific rumor involving the Eagles and Russell Wilson, the quote is vague enough that it could be coming from literally anywhere: a rival team looking to cast doubt on the team's commitment to Jalen Hurts, the Seahawks themselves signaling to the Eagles that they like the package they could potentially offer, or even Howie Roseman himself, for whatever reasons he might have.

So should you put a ton of stock in it? No. Is it a lot of fun to debate on a Friday in early April? You bet.