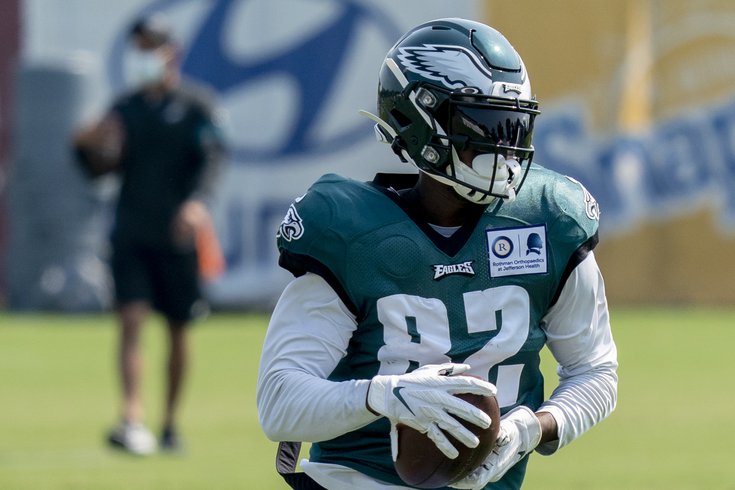 Each year during Philadelphia Eagles training camp (usually after the first 10 practices), we poll the Eagles' media contingent on which players have looked good so far throughout camp, and which ones have not looked so good.

On the stock up front, nobody ran away with it this year, as 11 players received votes:

For full disclosure, my vote was for Hightower, though I was torn between him and Arcega-Whiteside. For me, Hightower had a simply outstanding camp, as he far exceeded any expectations one should have of a fifth-round rookie.

I would say that our biggest miss as a media contingent was Sidney Jones last season. We did nail Miles Sanders, however, as well as Nelson Agholor, who had his lone impact season in 2017. We also correctly identified guys like Marcus Johnson and C.J. Smith as players who entered camp as longshots, but deserved to make the team, and did.

On the stock down side, eight players received votes, but Jones took the stock down crown this year, with 61 percent of the vote. If we had more voters like in previous years, he would have easily surpassed Patrick Robinson as the highest stock down vote-getter in the four years we've conducted this poll.

My pick on the "stock down" vote was Jones, who entered camp in something of a "now or never" situation, but hasn't been available, an all too common theme throughout his Eagles tenure.

Nate Sudfeld got two votes, which was a mild surprise. His stock was down when the Eagles drafted Jalen Hurts in the second round of the NFL Draft, but in my view, while Hurts is clearly more talented, he didn't outplay Sudfeld in camp.

Robinson had one of the worst starts to camp that I've ever seen, but he got better as the summer progressed and ended up becoming one of the best slot corners in the NFL that season, making a HUGE play in the NFC Championship Game along the way.

So, for the most part, like most Philadelphians, we can identify a bad player when we see one.