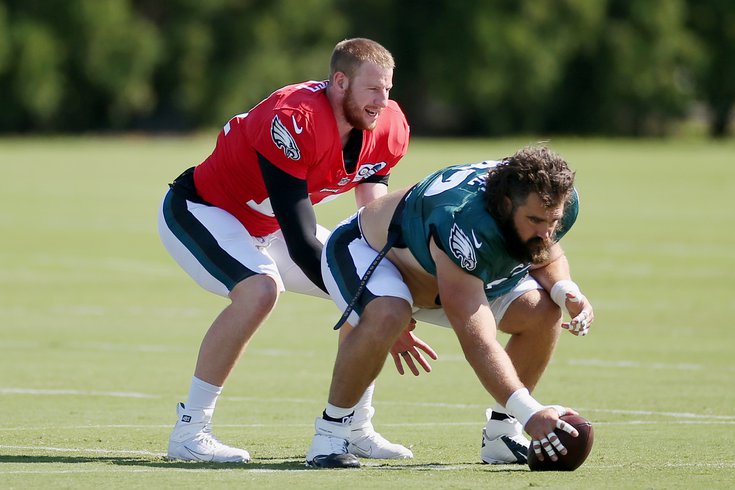 A preview of the Eagles' offensive line in December.

This time last year, the Philadelphia Eagles had an offensive line situation to be envious of, both in terms of their starting five, and their depth.

They were returning all five starters from the previous season, and the right side in particular was filled with three All-Pro caliber players in C Jason Kelce, RG Brandon Brooks, and RT Lane Johnson. It looked like this:

Behind that starting five, the Eagles still employed Halapoulivaati Vaitai, a player who the team trusted, and who they won a Super Bowl with at LT, as the primary backup at multiple positions. They had also just spent a first-round pick on Andre Dillard, a player many expended to land in the first half of the first round of the 2019 NFL Draft, but who slid into the 20's, causing the Eagles to trade up for their heir apparent to Peters.

The rest of the backups were sort of "high upside" late-round draftees like Matt Pryor, the ongoing project player in Jordan Mailata, and undrafted rookie Nate Herbig.

At the time, you'd be hard-pressed to find more than a small handful teams who wouldn't trade their entire line for the Eagles' entire line in half a heartbeat.

Now? Not as much.

Let's go through the different starting five iterations we've seen this offseason, starting with May, when the roster sort of settled after the draft. It was initially this.

Brooks then tore his Achilles, ending his season (with some remote hope that he can make a miracle return if the Eagles go on a deep playoff run).

Back in March, the Eagles and Peters came to a "mutual agreement" that Peters would enter free agency, but the team remained concerned about Dillard as the starting LT (per a source), and Peters just sort of lingered. In July, the Eagles eventually signed Peters to fill in for Brooks at RG, but certainly he was also serving as "Dillard bust insurance" at LT.

And then Dillard was lost for the season with a torn biceps.

So if you look at the current projected five starters, it really doesn't look that much different than what the Eagles were rolling with a year ago, when they remained one of the best offensive lines in the NFL. It's basically just Pryor in for Brooks.

Still, the level of concern at the position is easily the highest it has been since the start of the Doug Pederson era.

That's particularly troubling when you consider that Peters (38 years, 220 days), Kelce (32 years, 298 days), and Johnson (30 years, 113 days) are all a year older, thus more prone to injury and/or decline in quality of play. It should also maybe be noted here that Johnson hasn't been seen in a week at training camp after he was labeled as "day to day" with a "lower body injury."

Barring additional veteran signings, if when the Eagles suffer more injuries along the offensive line, they're going to have wholly inexperienced players filling in, in a season in which there are no preseason games for the younger guys to get their feet wet.

My best guess on the OL configuration after the next Eagles OL injury:

Yes, the linebackers don't look great on paper, and the wide receivers remain concerning until they actually perform in real games, but when you factor in positional importance and the likelihood of further injury depletion, the offensive line is now easily the Eagles' biggest concern heading into the 2020 season.