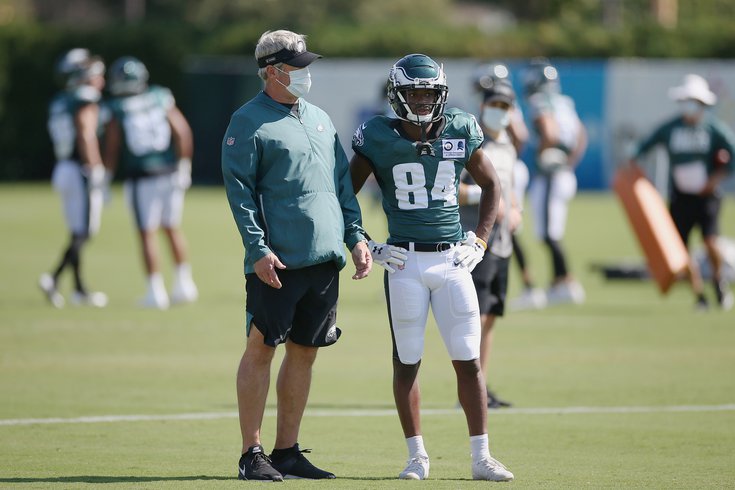 We're through the second week of Philadelphia Eagles training camp, so the day off once again feels like an appropriate time to update our 53-man roster projection.

Before we get started, however, I thought it might be worthwhile to see how many players the Eagles have kept at final 53-man cutdowns since 2016, when the Doug Pederson / Jim Schwartz / Howie Roseman era began.

I've gotten questions recently as to whether or not Nate Sudfled is a lock to make the roster. He is.

Since the start of the Pederson/Schwartz/Roseman era, the Eagles have never kept fewer than four running backs on their final 53-man roster, but it makes sense to go that route this year, since none of three backs listed as cuts above have definitively stamped their ticket.

The belief here is that the Eagles will be scouring the waiver wire for a veteran back at cutdowns. If they don't find anything they like, and they still want to head into games with four active backs, they can easily promote one of Killins, Holyfield, or Warren to the active roster from the practice squad, as two practice squad call-ups will be permitted each week during the season.

As you can see above, the Eagles have never kept more than six receivers on their final 53, but it's not a crazy proposition in a year in which they drafted three of them.

I can't see how the team can cut Deontay Burnett after the spectacular camp that he had this year. Could they possibly keep Burnett over Greg Ward? I can't see that either. They may just have to go heavy at receiver.

I've seen the idea of keeping just two tight ends floated, but I think the Eagles learned their lesson on that Week 2 last year, when they had to throw out a big chunk of their game plan when Dallas Goedert unexpectedly became unavailable shortly before kickoff.

Like with running back above, there's a possibility that the Eagles will be keeping an eye on the waiver wire for a veteran tight end, but the feeling here is that Togiai showed enough during camp that he can serve as the No. 3 TE, for now.

Changes: Josh Perkins out, Togiai in.

The loss of Andre Dillard for the season shook things up here a bit from our last projection, which did not include Jordan Mailata. There's no longer a debate over whether Mailata will make the team. He's in.

Meanwhile, center Luke Juriga is player the Eagles likely want to keep on their practice squad, and they'll perhaps be sweating out the prospect of another team putting in a waiver claim on him. On game day, Nate Herbig can serve as an in-game replacement for Jason Kelce at center, should Kelce go down, with Isaac Seumalo maybe filling in at center if Kelce were to suffer an injury that would keep him out for an extended period.

Changes: Mailata in, Dillard and Juriga out.

The Eagles have kept six defensive ends in two of the last four years, so this is not overkill, based on their history. Joe Ostman and Casey Toohill both made better arguments to make this roster than Genard Avery and Shareef Miller.

Should the Eagles go that route, Roseman will no doubt face some heat for the selection of Miller in the fourth round of the 2019 draft, and trading a fourth round pick for Avery at the deadline last year.

Missing on a fourth round pick (and in this case, a compensatory fourth round pick) is no big deal. There are far more fourth rounders who don't make it in the league than ones that do. However, the trade for Avery is looking really bad at the moment. Still, there's no sense in keeping either player over Ostman or Toohill, who did more to win jobs, and feel more likely to contribute in the short term (in the case of Ostman) and the long term (in the case of Toohill).

The DT position feels pretty easy this year, even if Javon Hargrave isn't ready to play by the start of the season.

Alex Singleton has a chance to crack the roster here as well, but he may need another injury somewhere on the team between now and next Saturday to get in.

Sidney Jones has long since fallen out of favor with Jim Schwartz, and all he did this camp was solidify a spot in Schwartz's doghouse by being a rare participant in practice. The Eagles should just trade him, but for now, we'll project that they won't cut him outright if nothing gets done on the trade front.

Should they successfully deal Jones, we would move Rasul Douglas back onto the 53. Douglas had a bad start to camp, but has played better more recently.

James is emerging as one of the Eagles' better special teamers, so there's some small risk in cutting him. However, if you can get him through waivers and back on the practice squad, he could be an in-week call-up who is actually active on game day.

I have a feeling the Eagles might keep Ford for special teams purposes, even though he stunk last year. The preference here would be to keep and develop Grayland Arnold, who has had his moments in camp.